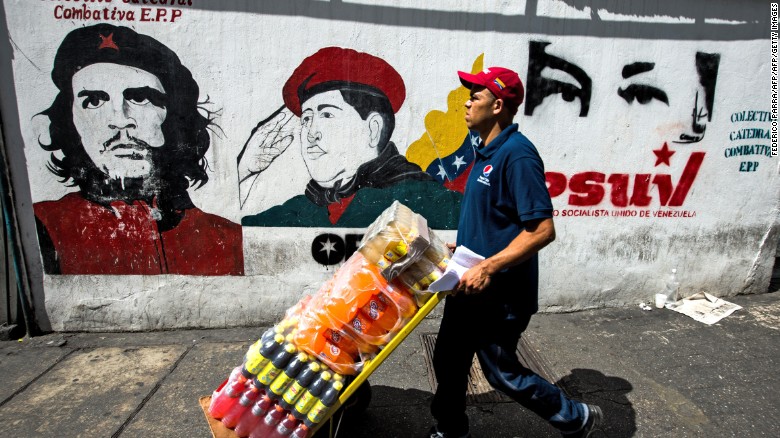 A worker passes propaganda graffiti in Caracas ahead of the vote.

(CNN)Venezuelans headed to the polls Sunday to vote for a new National Assembly. A total of 167 seats are up for grabs and, although President Nicolas Maduro is not on the ballot, the election’s outcome could have a major impact on his presidency.

A Pew Research Center poll released this week shows 85% of Venezuelans are dissatisfied with the direction the country is taking. This comes as the oil giant faces major economic inflation, a crippling recession and a rise in violence and insecurity.

“This election is a real barometer for how Maduro’s government has been doing,” Christopher Sabatini, a Columbia University scholar on Latin America, told CNN. “The polls clearly indicate deep dissatisfaction, leading one to believe that the opposition is very likely to win.”

Local media reported this week candidates from the Democratic Unity Roundtable (MUD), a coalition of several opposition parties, were leading in national polls by as much as 30%. If they win, this would represent the first major shift in power in the legislative branch since the late President Hugo Chavez took office in 1999.

International entities, such as the Organization of American States (OAS), expressed concerns of possible fraud after the National Electoral Council denied credentials for observers to accompany the electoral process.

In a letter released Tuesday, OAS Secretary Luis Almagro expressed concern over what critics term unfair advantages given to the government, such as use of public funds, access to the media, disqualification of opposition candidates and formulating confusing ballots.

“You have major opposition leaders in jail, you have no mainstream media, you have gerrymandered districts. Even if the opposition wins, Venezuela is a long way from being a total democracy,” Sabatini said.

Maduro said he would be the first to “recognize the results” and asked for the elections to be carried out “in peace.”

Under Venezuela’s current constitution, Maduro would be up for re-election in 2018.

Any move from the Maduro government will leave Haiti’s economy in danger.
Without PetroCaraibe  we will be in serious…..actually, more serious economic trouble.
Our present government mortgaged our future in order to carry out ongoing projects – now.
Like a household budget, the borrowed funds must be repaid, by future generations.
Already, the Americans have tightened their purse-strings with regard to Haiti.