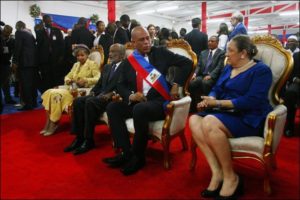 May 14, 2011 This isn’t the first time Preval has played this game. He did this to Jacques Alexis when Alexis was being considered as Prime Minister. Preval made several attempts to spoil the Martelly Day. The black out was only one thing. He purposely fumbled and delayed the transfer of Haiti’s Sash of Office. But his black out of the inaugural speech and the very bad TV/sound were just other irritants. And Elizabeth Delatour Preval, for all her money, stolen by past and present husbands, arrived looking like a street lady. Those who remember the American TV series GUNSMOKE will remember the good hearted hooker who ran a whore house. She dressed – for her part – in exactly the same way Preval’s wife appeared today. Sort of a Pepe Princess look with bad make-up. As the Irish would say, she was mutton trying to look like lamb. Who will she take up with now that Preval is out of a job. She has been through quite a list so far, so the field is limited.