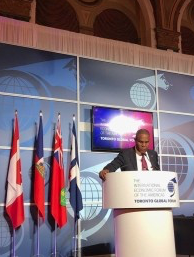 Speaking at the Toronto Global Forum of the International Economic Forum of the Americas, which was held December 10-12, 2018 in Toronto, Prime Minister Jean Henry Céant appealed to foreign investors to come to Haiti saying “Our will to succeed will allow us to catch up with delays and make Haiti a prosperous country.”

He mentioned that the Government of Haiti is currently working on a set of economic and social reforms and would invest in roads, ports and airports to facilitate international trade, but also to promote local job creation.

Prime Minister Céant said it was time to change people’s negative perception and misconceptions about Haiti, stressing with conviction “The opportunities in Haiti are much greater than the risks”, saying “More than ever, Haiti is open investors and travelers.”

Boosting the green economy opportunities, he said Haiti should not miss the energy transition, citing for investors the potential of renewable energy in Haiti solar, wind and hydro.

Moreover, in the agricultural field, while having as a priority to feed the Haitian population, he said he was convinced that with financial support, be able to impose the Haitian products from organic farming in regional and global markets.

Finally, he said he hoped that Haiti would become a tourist hub in the Caribbean because of the country’s unique cultural and historical assets.