A leading scientist says that prospects appear good but that concerns over safety could be the next hurdle for the vaccine’s development.

WASHINGTON — British scientists developing a potential vaccine for the coronavirus hope to see a “signal” as to whether their vaccine candidate is working by June, an official involved in the effort said Sunday on “Meet the Press.”

Sir John Bell, the Regius professor of medicine at Oxford University, where one of the leading efforts to develop a vaccine is underway, said that the prospects for Oxford’s candidate are “pretty good” and that “as every day goes by, the likelihood of success goes up.” 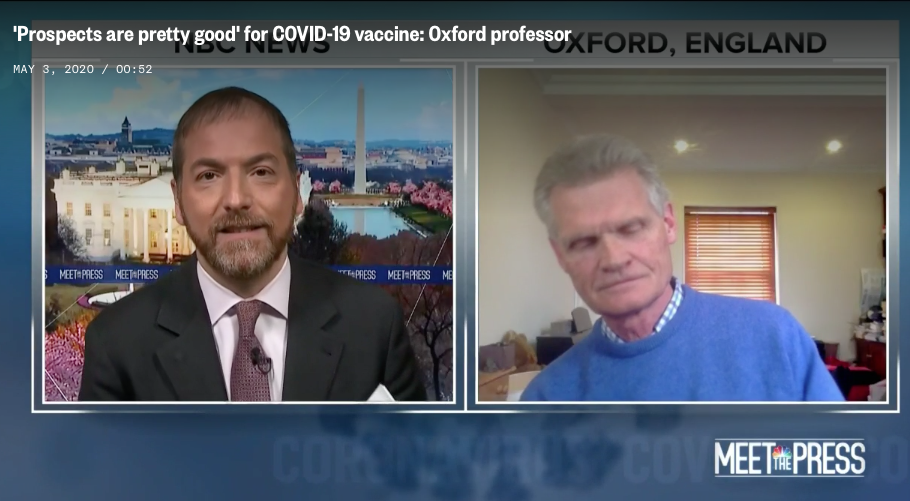 The researchers hope to have enough data from their phase-two trials that “we would get evidence that the vaccine has efficacy by the beginning of June.”

Full coverage of the coronavirus outbreak

The group at Oxford is one of the many racing toward finding an effective and safe vaccine for the coronavirus alongside efforts to contain the spread of the pandemic.

More than 240,000 people have died of COVID-19 since January, and there have been more than 3.4 million reported coronavirus cases around the world, according to NBC News.

Bell didn’t offer a timeline for when a vaccine might be fully developed, but he said that in the rush for one, it is imperative to make sure that safety remains a top priority. He said the Oxford group has already conducted preclinical primate studies and taken other steps to make sure “we’re being very careful.”

“It’s a big issue for us, is trying to be sure that we do this quickly but we don’t miss out any of the key safety steps,” he said.

“I think we’ve got reason to believe that the efficacy, the efficacy of the vaccine in terms of generating strong antibody responses, is probably going to be OK. The real question is whether the safety profile’s going to be fine. So that’s actually the main focus of the clinical studies,” he said.

With so many trials and vaccine working groups across the globe, Bell said, the Oxford group wants to be sure that there can be “wide access” to its vaccine if it ultimately proves successful.

“One of our ambitions is to make sure that there’s wide access around the globe should the vaccine be successful,” he said, adding that the team wants to make sure developing countries aren’t “left behind in the manufacturing race to get more vaccine available.”

Ben Kamisar is a political writer for NBC News.