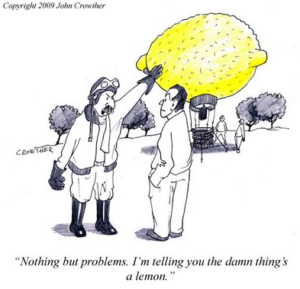 Haiti Aviation, the Haitian-operated airline that distinguished itself from the competition by busing customers to their final destination after their arrival, has had its wings clipped.

Flights were abruptly suspended Thursday, stranding passengers in Port-au-Prince, Haiti and in Miami.

Falcon Air, which had been leasing a 150-seat aircraft and six crew members to Haiti Aviation for thrice-weekly flights between Miami and Port-au-Prince told the airline Wednesday night that it would no longer provide the plane and crew.

When Nelson Ramiz Jr., the general manager of Falcon said the plane would no longer be showing up at the gate, “I thought it was a game,’’ said Charles Voigt, Haiti Aviation founder.

But the financial dispute between Voigt and Ramiz is quite real.

“For the past week, we had been demanding payment. On Friday, they paid half and said they would pay the rest on Monday. It came and went. They asked us to wait until Wednesday,” Ramiz said. “At 4:30 p.m. we got a message saying all of the service providers need to give them five days credit.

“When we saw they were having problems with paying for fuel, asking for five days credit and didn’t contact us, we sent them a cancellation notice,” Ramiz said.

Voigt said Ramiz told him last Friday that the airline owed $100,000. He disputes the figure.

“I have about $300,000 of security deposit in Falcon’s hands. All of a sudden this happened? I feel something happened. I don’t know if Falcon wants to take over the route,” Voigt said.

Voigt said that since July, he’s paid about $1.5 million to Falcon and almost the same amount to his fuel supplier. Haiti Aviation, he said, has been a good customer. It’s biggest problem has been getting reimbursed from credit card companies.

Voigt said he regrets passengers weren’t informed sooner of the cancellation of flights. He’s been working on spreading the word and getting security deposits back to repay cash customers. Credit card customers are advised to contact their credit card companies for a full refund.

“There are no words to describe how I feel at the moment,” said Nathacha Henrice, who was among passengers who arrived at Miami International Airport Thursday for an 8 a.m. flight to Port-au-Prince for the holidays. She said an airport employee told her Haiti Aviation was no longer operating.

This is the second time this year an airline has suspended Haiti flights. Curaçao carrier Insel Air ended service earlier this year.

Voigt who once ran Haiti Trans Air until it was shut down by the U.S. embargo that followed a 1991 military coup in Haiti, said he’s working on reviving the airline but is unsure when that might be.

“I spent two years putting this together. I wanted to create a system that the Haitian people would feel good going to,” he said. Despite his efforts, he said he never saw a profit from the venture. “To put an airline together is very costly. I got no help from anybody.”

3 thoughts on “One less route to Haiti: Haiti Aviation shuts down after five months”