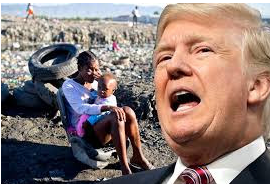 With Election Day 2016 approaching, then-candidate Donald Trump traveled to Miami to earn the support of a group of Haitian-Americans.

“Whether you vote for me or you don’t vote for me, I really want to be your greatest champion, and I will be your champion,” he said at the Little Haiti Cultural Center.

Flash-forward more than a year later: Trump ordered almost 60,000 Haitians — many of them from Florida — to leave the United States or adjust their immigration status by July 2019.

The Trump administration’s Nov. 20 decision came after a review of the Temporary Protected Status for Haitians who arrived after the 2010 earthquake. This announcement prompted outrage from Republicans and Democrats in Congress, including former U.S. Rep. Gwen Graham, a Democrat in Florida’s governor’s race.

“Donald Trump lied to Florida’s Haitian community on the campaign trail and stabbed them in the back,” Graham said in a Nov. 29 news release.

We can’t say whether Trump “lied,” as Graham asserted. But we wanted to take a closer look at what Trump said and let readers decide for themselves.

Trump never explicitly promised to extend the TPS designation for Haitians, but according to those in the community, Trump’s words that September day meant he would defend Haitians’ interests.

“He turned his back on the Haitian people,” said Gepsie M. Metellus, the executive director at Sant La Haitian Neighborhood Center in Miami. “He made a promise, and a promise in Haitian culture is a debt, and he did not live up to his promise.”

Trump’s meeting in Little Haiti lasted 26 minutes. In addition to telling the attendees that he wanted to be their “greatest champion,” Trump criticized the Clintons’ past involvement in the country and noted that Haiti is still suffering “very badly.”

“Clinton was responsible for doing things a lot of the Haitian people are not happy with,” Trump said from prepared remarks. “Taxpayer dollars intended for Haiti and the earthquake victims went to a lot of the Clinton cronies.”

The Clintons faced a lot of criticism for their involvement with recovery efforts in Haiti after the magnitude 7 earthquake in 2010. Former President Bill Clinton served as the United Nations special envoy and helped raise hundreds of millions of dollars for the country; Hillary Clinton traveled to the country multiple times as secretary of state; and the Clinton Foundation raised more than $30 million for recovery projects.

Trump reiterated his support for Haitians weeks later in Ocala.

“As Haiti’s death toll from Hurricane Matthew is on the rise, we should never forget how Bill and Hillary Clinton handled Haiti the last time,” he said Oct. 12, 2016. “To all our friends in Little Haiti, they’re great people. .?.?. these are people that are incredible. They have the warmest feeling, the warmest heart. But to all of our friends in Little Haiti, your day of justice is coming, believe me. And it arrives on Nov. 8.”

Many had rebuilt their lives in the country since the earthquake.

“The idea was that Trump was supposed to help people find a path to stay here permanently, not force them out of the country,” said Linda Tavernier-Almada, director of education for the Haitian Association Foundation of Tampa Bay. “They’ve been paying taxes. They’ve opened up mom-and-pop shops. They are our nurses, our interns. Many children have been born here.”

Tavernier-Almada didn’t vote for Trump but said people in the Haitian community expected him to keep his word when he vowed to be their greatest champion.

The idea that Haitian-Americans want to return to the country, Metellus said, “defies all logic.”

The Trump administration has defended its decision by pointing to the obvious feature of the status: it’s temporary.

The Department of Homeland Security can decide to award TPS to nationals from countries experiencing civil war, environmental disasters or epidemics — conditions that prevent their safe return. The department periodically reviews the designations and decides to extend or terminate it based on the country’s progress and conditions.

A bipartisan group of Florida lawmakers including both Sens. Marco Rubio and Bill Nelson had appealed to the Trump administration to extend TPS for Haiti months before this announcement, warning that Haiti wasn’t ready for an influx of residents. They said the nation hadn’t fully recovered from the 2010 earthquake and subsequent cholera outbreak, and had been further devastated by Hurricane Matthew in 2016.

South Florida representatives from both sides of the aisle have introduced legislation to help the populations affected by the administration’s recent actions.

The Extending Status Protection for Eligible Refugees Act, or ESPERER Act (“esperer” is French for “hope”), would grant permanent residence to TPS recipients from Haiti, Nicaragua, El Salvador or Honduras who haven’t been convicted of serious crimes.

The bill has a long way to go before it will be voted on, if at all. It was introduced in the House in late October and hasn’t been heard by any committees.