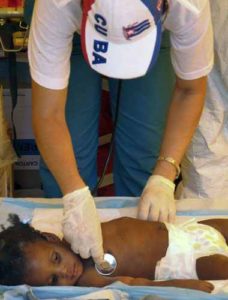 The specialists were welcomed by the head of the Cuban medical brigade, Lorenzo Somarriba, who gave details on the program carried out there to rebuild and strengthen the Haitian national health system, Granma newspaper reports.

At the same time, 23 Cuban specialists who had been making their contribution in Haiti for two years returned to Cuba.

In the last four months, the number of people infected with cholera in Haiti rose to more than 241,300 of which 4,573 have died, according to the latest report of the Haitian Ministry of Public Health and Population.

The restoration of the community hospital of L’Estere, in the department of Artibonite, began this week as part of a Cuba-Venezuela project to better the national health system in Haiti.

Although Cuba has been assisting Haiti for more than a decade, the presence of Cuban health professionals there increased to over 1,000 specialists after the earthquake that devastated Port-au-Prince, the Haitian capital, in January 2010, leaving thousands of people dead and many more injured.