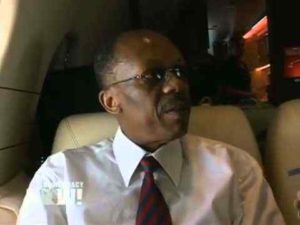 PORT-AU-PRINCE, Haiti (AP) — Exiled former President Jean-Bertrand Aristide returned in March to a movie star’s welcome, arriving by private jet to a crowd of adoring fans and fevered speculation about what the twice-ousted leader would do back home.

The mystery has only deepened since then.

In a surprise to supporters and opponents alike, Aristide has disappeared from the public eye, vanishing behind the high walls of his compound.

He has made no speeches and granted no interviews. He hasn’t taken a tour of the devastation from last year’s earthquake, at least not that anyone has seen.

Nor has he been spotted at any restaurants as has Jean-Claude “Baby Doc” Duvalier, the ousted former dictator who also made an abrupt return to Haiti this winter.

Aides rebuff questions and security guards at the compound have turned away journalists.

“It’s rare that the president steps out of the house and says hello,” said Jean-Max Maxime, a mason helping to increase the height of the towering concrete walls that surround the house near the Port-au-Prince airport. “He’s always inside.”

Such a low profile is hardly what anyone expected of Aristide, one of the most charismatic leaders in Haitian history. The former priest, who led opposition to the Duvalier regime and became the first democratically elected president, is a polarizing figure: beloved by many of the country’s poor, loathed by the wealthy elite and distrusted by foreign governments, particularly France and the U.S.

Many Haitians expected Aristide would quickly return to politics, doubting the claims by aides that he only wanted to rebuild the university and foundation that withered after he was driven from power in a violent rebellion in 2004. The U.S. warned he could be a disruptive force and he seemed to signal his intentions upon his return by immediately denouncing the exclusion of his party, Lavalas, from the presidential election.

The day of his arrival, thousands of Haitians waited and rallied in the shade of mango trees outside his home. He waved to supporters before vanishing into a cocoon of security from which he has yet to emerge.

“He seems to have disappeared off the radar screen,” said Robert Maguire, a longtime Haiti scholar who teaches at Trinity University in Washington, D.C. “I’m surprised we haven’t heard from him. I don’t know what to make of it.”

Longtime supporters and aides provide few clues. The former president has been invited to attend Saturday’s inauguration of President-elect Michel “Sweet Micky” Martelly, a popular musician who publicly sided with the right-wing elite who ousted Aristide in 2004.

Michelle Karshan, Aristide’s foreign press liaison, said she didn’t know if he would attend the swearing-in ceremony on the grounds of the collapsed National Palace and she declined a request to ask the former president. Maryse Narcisse, a Lavalas leader who frequently spoke for Aristide while he was in exile, now passes on questions to a secretary to the former president, who refers journalists to Karshan.

On most days, a stream of SUVs passes through the gates of the Aristide compound, but it’s unclear with whom he meets. U.S. Ambassador Kenneth Merten hasn’t spoken to the former president, nor has former U.S. President Bill Clinton, the U.N.’s special envoy to Haiti and co-chairman of the reconstruction effort. A spokesman for outgoing President Rene Preval, a former Aristide protege who reportedly became estranged from him in recent years, declined comment.

“I think he’s trying to listen to people and find out what’s going on in education and in the country in general,” Kurzban said. “I think it would be odd if he came back and started making statements, instead of listening to the people of Haiti about what’s happened the past seven years.”

Aristide made few public statement during his exile in South Africa, though he repeatedly said he wanted to come back to work as an educator through his foundation. After “Baby Doc” showed up in January, Aristide made his desire known again and he was issued a diplomatic passport that enabled his return.

So far, university students and foundation staff say he has not come by the complex, a short drive from the compound.

The school reopened in 2008. Its 200 enrolled students take computer courses and Spanish taught by Cuban instructors. On a recent afternoon, several students in their 20s hung out under a shade tree, seemingly unconcerned by Aristide’s silence.

If Aristide, whom many know by his Creole diminutive “Titid,” did emerge from his seclusion, Patrick Elie, a friend and former minister in his government, said he would do so quietly.

“He would have to be very discreet,” Elie said. “The minute people spot him they’re going to scream ‘Titid,’ and you’re going to have a bona fide demonstration.”

Articles like this, before his return, made Aristide misjudge his popularity.  Overwhelming popularity, charismatic….and all those good words, made him believe what was not, rather than what was.

Aristide flew into Haiti to be met by virtually no one. There was about 100 media people and a similar number of airport workers. Added to this was a couple of dozen Aristide supporters.

This was hardly a movie stars welcome!!!

If a movie star got this welcome, he/she would immediately attempt suicide!

His supporters try to build an image of his car being mobbed all the way to his house at Tabarre. Not so. No one mobbed the car and few noticed his passing.

Preval had hired a mob to greet him at Tabarre. This gang got out of control. Tear cas was used. Hundred climbed the walls and assaulted Aristide house carrying off every stick of furniture, all the food from the buffets and personal belongings of his guests, including Danny Glover.  This was captured on tape.

His children were so traumatized that they were taken to the Dominican Republic.

He did not stay at Tabarre and remains in seclusion, elsewhere, probably in Fermathe.

Jean Claude Duvalier has one and travels all over the place to be greeted by huge crowds. In fact, a visit to Cabaret created such wild enthusiasm, for Duvalier, that Preval tried to restrain him under illegal house arrest.

On the other hand, Aristide remains locked away, by his own hand, because he knows his popularity is dead.

So far as the so called charisma is concerned, a foreign journalist recently found herself in Aristide’s company, along with wife Mildred, and others. When she came away she said…”I had always heard about his charisma but he has none, absolutely none…ZIP!!! He has the charisma of a dead mackerel…However, Duvalier is a real person. I like him…”

And Patrick Elie, with a felony conviction in the United States, is another great advisor.

Aristide remains secluded because he is a realist. He knows that there are hundreds, perhaps thousands of Haitians who would like to settle things with him. Some legally. Others illegally. Either type of person is a threat to his quiet life.

Aristide’s popularity is not what it used to be. The vast majority of Haitians show absolutely no interest in the man, whenever his name is mentioned.

The MOB has abandoned Aristide for a new, vibrant and promising leader – MICHEL MARTELLY

With Martelly’s inauguration, Lavalas, and Aristide will take one more step down the path to becoming a footnote in history.