Port-au-Prince (AFP) – With a political vacuum now a real possibility in Haiti after presidential and legislative elections were postponed indefinitely, Sandra Honore, chief of the UN’s MINUSTAH mission, rejected accusations of international interference.

QUESTION: How do you respond to claims by the opposition and some civil society groups that the international community is interfering in the dialogue between Haiti’s political actors as they try to find a solution to the electoral crisis?

Answer: I reject this notion that the international community is trying to influence the electoral process… These negotiations are taking place between various Haitian political actors. The United Nations is not participating in the negotiations. This reflects the UN Security Council’s desire, as expressed in its declaration Friday, indicating that an agreement on a plan of action needed to be set and led by the Haitians. So it’s a Haitian-Haitian process aimed at reach a consensual outcome that’s acceptable for those most interested in what’s best for the Haitian people.

QUESTION: Last time Haiti had a transitional government, it was supposed to last just four months but in the end lasted from 2004 to 2006. Are you concerned the interim period due to begin soon could last indefinitely?

ANSWER: What gives me hope is a common sense of urgency to find a solution to preserve Haiti’s democratic institutions. That’s shared by civil society, the opposition, non-governmental group, the authorities and parliament alike. We feel that a solution is urgently needed, the country must move forward and the negotiated interim government deal has clear time limits. That way, the country can find its way again with an elected head of state. The government must also be ratified by the national assembly in order to keep focusing the country’s energy on major socio-economic problems.

QUESTION: Does this latest electoral delay indicate some kind of failure in the work of MINUSTAH, which has been deployed in Haiti for 12 years to support the constitutional and political process?

ANSWER: The Haitian parliament’s dysfunction from January 2015 was obviously a rather negative development, but the electoral process still got underway and Haiti spent all last year working toward elections. Yes, it certainly was a step backward when polling was called off for the January 24 runoff vote over safety concerns as explained by the president of the provisional electoral council. Still, I’m not going to describe that as a failure of MINUSTAH’s work. The fact remains that, in the 12 years of the mission’s existence, there has been positive progress in Haiti as concerns our work in the local institutions. It’s true that you always tell yourself you can do more, you can do better. I would say that this crisis Haiti is enduring is also a time for the country to find the opportunity to get things back on track, to continue moving forward with the lessons learned about everything that didn’t work when it should have worked.

A lot of non-answers from the MINUSTAH tourist group.

Martelly could have used some support, immediately before his speech to the nation.

The violence would have been avoided.

Elections would have been held.

We would have President.

Instead, a very small percentage of Haiti’s population was allowed the opportunity to blackmail the system into paralysis.

As a side, but very important issue, the majority wanted Jovenel Moise for President.

Hands up for Jovenel Moise!!!! 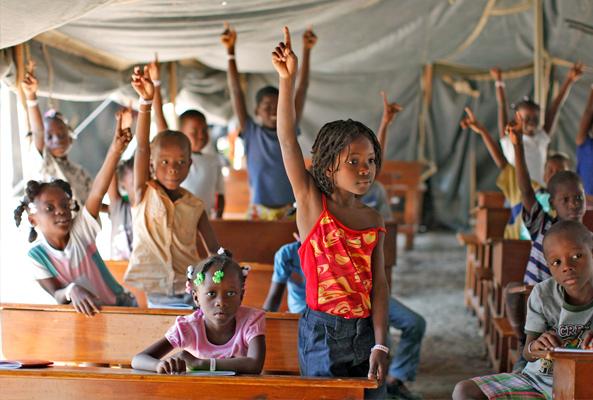