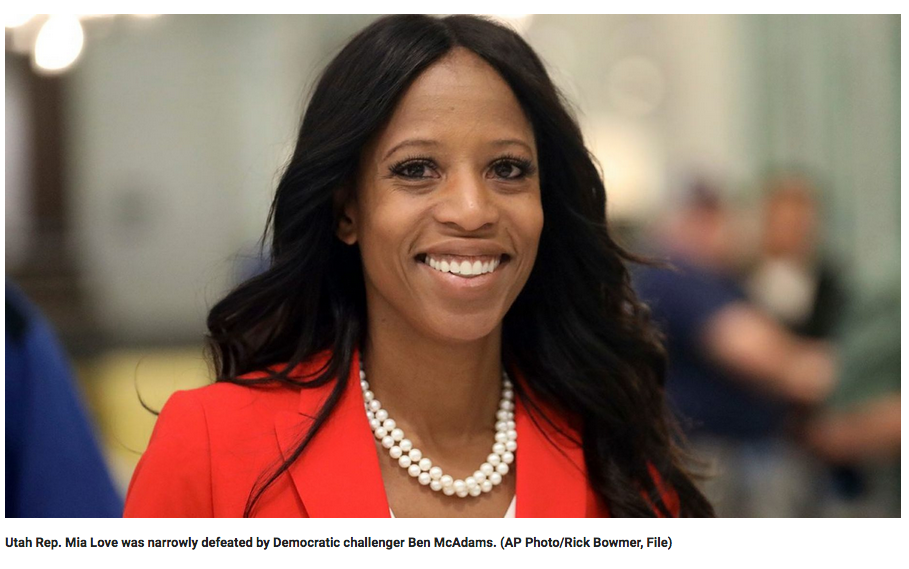 Incumbent Republican Utah Rep. Mia Love, whom President Trump derided in a post-Election Day news conference, has been narrowly defeated by Democrat Ben McAdams in a race that took two weeks to settle.

Final results posted Tuesday showed McAdams defeated the two-term Love by fewer than 700 votes in the deep-red state — barely more than the tally that would  have triggered a recount.

McAdams’ victory adds to Democrats’ majority in a year when they’ve flipped more than three dozen Republican-held seats across the country to win control of the House of Representatives.

A day after the Nov. 6 midterm elections, when it appeared Love was headed for a loss, Trump said that she had asked him for help over an American hostage’s release from Venezuala, but in return “Mia Love gave me no love.” 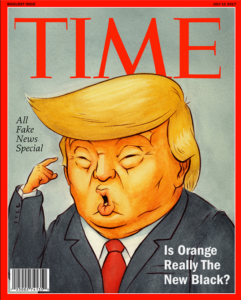 He suggested that Love would have prevailed if she had embraced him politically, instead of highlighting the times she’s stood up to him, like when Trump used an expletive to describe her parents’ home country of Haiti. She tried to separate herself from Trump on trade and immigration and shunned him on the campaign trail.

The president added that he wasn’t sure whether or not to feel happy or sad over Love’s apparent defeat at the time, but insisted that he “feels just fine about it.”

However, as votes continued to stream in after the president’s remarks, Love took a slim lead, and it appeared briefly that she would ultimately prevail.

McAdams declared victory Monday night after a release of ballots gave him a margin his campaign believed was insurmountable. State election officials will certify the final results next Monday.

Love did not immediately respond to a request for comment.

He pitched himself as a solid moderate, and not a typical Democrat, while calling Love a partisan who almost always votes with the president. The strategy was aimed at independent voters who account for nearly four in 10 voters in the largely suburban district, and designed to overcome his built-in disadvantage in a district where registered Republicans in the district outnumber Democrats by nearly 3-to-1.

He is an attorney who graduated from Columbia Law School and practiced in New York before returning to his home state of Utah. He has been a political figure in the state for a decade. He was elected as one of the few Democrats in the GOP-dominated state Legislature in 2008 and successfully ran for the Salt Lake County mayor’s seat four years later.

He became known for working with the state’s Republican leaders on issues like homelessness, where he backed a narrow Medicaid expansion to cover treatment and once went undercover as a homeless person when the issue reached crisis mode downtown.

Though solidly conservative, Utah voters have long been uncomfortable with Trump’s brash style and his comments about women and immigrants. That anxiety is especially pronounced in the suburbs of blue-leaning Salt Lake City, and McAdams’ mayoral position gave him solid name recognition with voters. 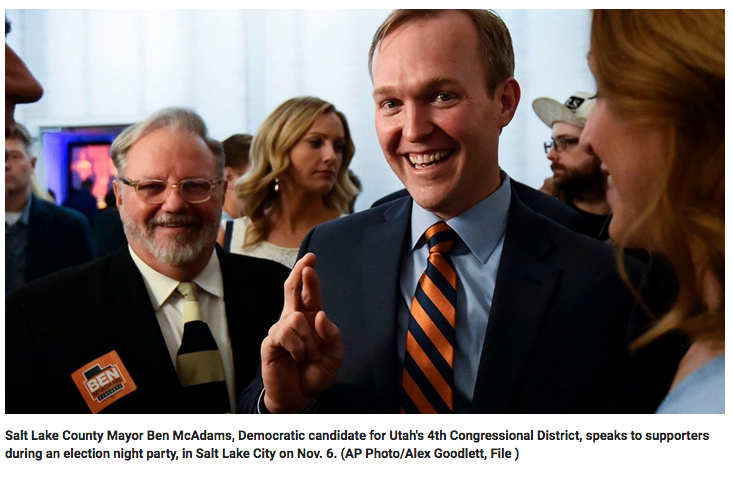 McAdams said during the campaign he would not support California Rep. Nancy Pelosi as House Speaker and insisting he’d be able to work with the president. He sharply criticized Love’s support for the GOP-backed tax overhaul and said she had not been available enough to her constituents at town halls.

He has already signed a letter along with 15 other Democrats vowing to oppose Pelosi.

Love pushed back hard, saying the tax overhaul has been good for people in Utah and defending her approach of meeting with voters in smaller groups, on the phone or online.

This is the second time Love was locked in a tight, drawn-out race for this House seat. In her first bid for Congress in 2012, Love lost to incumbent Democrat Jim Matheson by 768 votes. She went on to defeat Democrat Doug Owens in 2014 and again in 2016.

Fox News’ Stephen Sorace and The Associated Press contributed to this report.

This indicates the Haitian position with Trump. He is a petty, small-minded narcissistic clod, but he is President of the United States.  Trump does not understand the meaning of loyalty, or values. He is an opportunist who forces issues to his own likeing.

Mia Love tried to educate him as to the long-standing relationship between the Haitian people and those of Venezuela. Chavez and Maduro are simply passing cloud in history and should not be a basis for our abandonment of Venezuela.

Trump could never understand this.

So, out of spite, he created a situation in which a Republican lost a seat to a Democrat. This adds to the problems Trump will face over the next few years of his term, but he really doesn’t care.