A large earthquake has struck near Acapulco on Mexico’s Pacific coast.

The United States Geological Survey (USGS) said the quake had a magnitude of 7.6 and put the epicentre at 15 miles (25km) east of Ometepec, in Guerrero state.

Witnesses in the capital, Mexico City, sending office workers rushing out onto the streets.

The earthquake was followed by a strong aftershock.

The BBC’s Will Grant, in Mexico City, says buildings swayed for at least a minute.

Office workers and residents were sent running into the streets in wealthy districts and poor neighbourhoods alike, he reports.

Sirens could be heard across the city, and police helicopters are crisscrossing the skies. 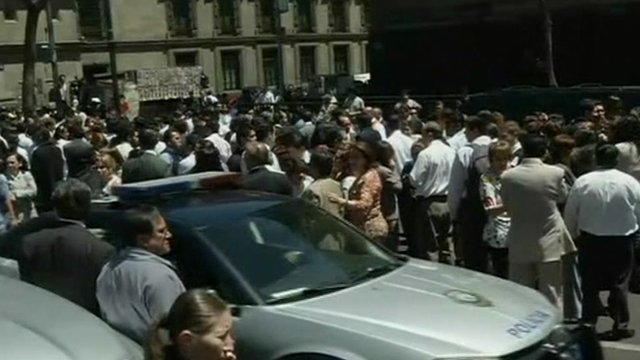 The BBC’s Will Grant in Mexico City: “Buildings were swaying for well over a minute”

Mexico City Mayor Marcelo Ebrard’s Twitter account said the water system and other “strategic services” were not experiencing problems and no damage was reported in the central or northern areas of the city.

Mobile phone networks have been affected, our correspondent says, and people have had trouble contacting their loved ones.

The quake was felt in Oaxaca state, next to Guerrero state, but no damage was reported there, according to local TV.

The USGS said the epicentre was 11 miles (18km) underground.

1 thought on “Mexico hit by strong earthquake near Acapulco”