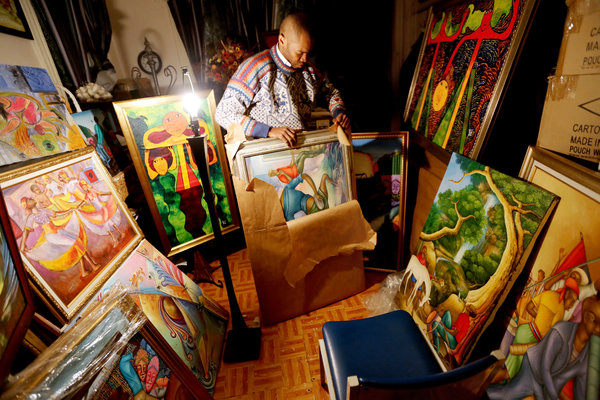 DOUBLE LIFE Yves Deshommes’s home in Brooklyn is full of Haitian art that he sells to raise money for charity.

Except for its location across from Carnegie Hall, the lobby of 200 West 57th Street seemingly has no reason be filled with the sound of music early every morning. But the grand Rodin Studio Building, long ago converted into offices for medical and dental practices, law firms, talent agencies and production companies, employs as its concierge Yves Deshommes. Trained as a classical violinist, the Haitian-born Mr. Deshommes, 45, has worked there for 16 years, and the interval between 6:30 a.m., when his shift starts, and 7:30 a.m., when the first tenants and visitors trickle in, is a good time to practice.

“I’ll walk by and say, ‘How’s that Bach Partita going?’ ” said Dr. Jamie Koufman, who heads the Voice Institute of New York on the 12th floor.

Mr. Deshommes remains dedicated to his music; he serves as violinist-in-residence, men’s choir director, assistant director of the music department and cantor of the Creole French Gethsemane Seventh Day Adventist Church in Brooklyn. But since 2010, a passion at least equal to his violin playing, his family and his church has taken over. In the aftermath of the earthquake that devastated Haiti three years ago, Mr. Deshommes has made himself a philanthropist, starting a foundation to support Leogane, the town near the capital, Port-au-Prince, which was at the quake’s epicenter. The foundation is called Haiti Bas-Citronniers Foundation, after the rural section of the Leogane area where he is focusing his efforts.

Using his knowledge of Haitian art, Mr. Deshommes has mounted several exhibitions in offices at his workplace, where paintings have been sold. Next month, from Feb. 7 through 10, he will show more paintings at the Harlem Fine Arts Show at Riverside Church.

“I grew up on the Rue Romain in Port-au-Prince, a block away from the Centre d’Art,” he said, referring to a museum and art school founded in 1944 to nourish Haitian art. “I went there all the time to look at the art. I spoke to many painters. I learned about it.”

Recently, standing in the conference room of Dr. Koufman’s office suite, surrounded by eight pieces he had selected for the Harlem show, Mr. Deshommes motioned to works like the Voodoo-symbol-laden “Testament,” by Roi David Annisey; “The Healer,” by Pierrot Clerissont, a modernist painter of Haitian subjects; a fishing scene by Nicolas Dreux, who incises his oils with a razor blade; and an intricate village wedding scene by Harold St. Jean.

During the earthquake, the three-story house where Mr. Deshommes was raised before coming to New York at 17 “collapsed like a house of cards,” he said. His mother escaped with a bad leg injury, but he lost five of his young nieces and nephews.

His response, after tending to his mother, was to seek out a place “where help was needed most,” he said, and he settled on the hard-hit and isolated Bas-Citronniers, which is reached only by fording the La Rouyonne river five times, Mr. Deshommes said.

By his first visit that March, and thanks in part to contributions from some of the tenants and the management at 200 West 57th, he was able to supply several large tents for those without shelter, as well as soap and medicines. He vowed to return to establish a continuing presence and has since made 16 trips, spending a great deal of his own money.

“The earthquake is like the AIDS situation,” he said, referring to the initial outpouring of financial and other support from nongovernmental organizations and charitable groups. “Honestly, going once but not returning doesn’t do anything. There is so much corruption, and the need is so great. It hasn’t gotten better. You go to Port-au-Prince and people are still living in tents; the water situation hasn’t been solved; people are hungry. That’s why I wanted to make a statement that the foundation was there to stay, and that they could trust my integrity.”

Because “the children are most in need, and they are the future,” Mr. Deshommes said, the initial step has been a school — the locale’s first — currently in temporary quarters but with three kindergarten classes and one prekindergarten class. Like the foundation, it is staffed by Haitians. The total fund-raising goal is $200,000, of which Mr. Deshommes has raised $40,000. On a trip this weekend, Mr. Deshommes was to meet with the architect for the school building. Planned next are a community center and kitchen, a vegetable garden and a clinic.

Mr. Deshommes’s early visits also put him back directly in touch with Haitian art and artists, many of whom are clustered in Jacmel, within driving distance of Leogane.

“That’s what gave me the idea of creating awareness of the foundation with art, and selling it when I could to raise money,” he said.

Most of the works he has bought outright, though some, like pieces by Ernst Louizor, one of Haiti’s most renowned painters, are on consignment. He carried the canvases back to New York; he has over 100 to help him spark interest in his foundation and in contemporary Haitian art.

“Haitian artists are struggling, cultural centers are struggling,” said Holly Block, executive director of the Bronx Museum, which has been advising another arts organization, Creative Time, about working in Haiti.

Mr. Deshommes graduated from Fort Hamilton High School in Brooklyn and attended Queens College. In the 1980s, he did some modeling. He met his wife, Yves-Rose, in church when he was 23 and she was 17.

They live with their two sons in a three-room apartment in the Wingate section of Brooklyn, known as Little Haiti. The living room has been swallowed up by Mr. Deshommes’s accumulated art. On the upright piano is open sheet music. “If it’s Book One, it’s Zacharie’s,” he said of his 9-year-old; “Book Two, it’s David’s,” his 13-year-old’s; “and Book Four, mine. I’m working on Schumann.” He also has a 10-month-old daughter.

Through his job, Mr. Deshommes became friendly with Matt Williams, a producer of television shows like “Home Improvement” and movies like “Bernie,” whose production company, Wind Dancer Films, had offices there. Two-and-half years ago, Mr. Williams had started, “on paper, at least,” he said, the Laughing Angels Foundation, a nonprofit group committed to helping children around the world.

In the fall, Mr. Williams accompanied Mr. Deshommes to Leogane and decided to form a partnership with Haiti Bas-Citronniers Foundation; he is making plans to reach out to his extensive network of contacts.

“The deprivation there is like nothing I’ve ever seen,” he said. “I believe that if you start with one school, one Bas-Citronniers, others will follow, ultimately all over. We have to do this right because it’s a template. As I always say, ‘You make all your mistakes in preproduction.’ ”

Outside Mr. Deshommes’s apartment were two piles of boxes of supplies and clothing destined for Bas-Citronniers. His home has few closets.

“I live this way so that I can support others,” he said.

This article has been revised to reflect the following correction:

An article in some editions on Jan. 20 about Yves Deshommes, a Manhattan concierge who runs a foundation to help Haiti, in part by selling Haitian artwork, misstated the given name of one artist. He is Harold St. Jean, not Hector. (Readers pointed out the error in e-mails last week.)