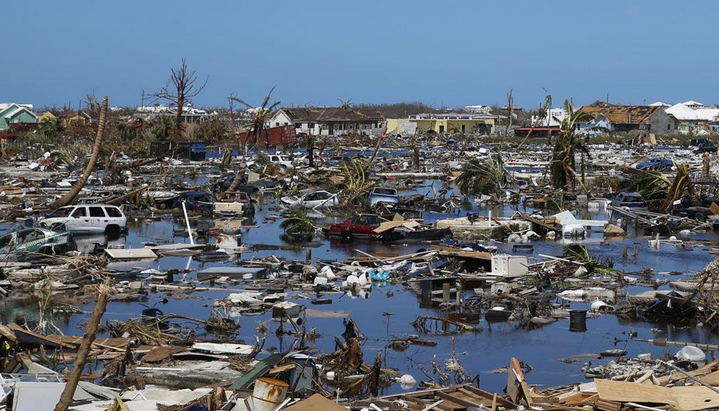 Hurricane Dorian, the most catastrophic storm to hit the Bahamas, has upended everyday routines.

On Sunday, the St. Francis Catholic Church, an imposing round structure on a hill in Abaco, was still being used as an emergency shelter. All of its occupants were Haitians and Haitian Bahamians.

It was one of the few churches standing in a Haitian community where many houses of worship either collapsed or were partially destroyed.

“This storm did not carry only houses but … people too, so many people get killed they don’t have time to pick them up,” said Pasterain Sitoir, 78, the pastor of First Beraca Baptist Church, where more than 200 people took shelter and survived. “In the next couple of weeks this will be a dangerous place to be.”

As storm-ravaged evacuees continued to abandon Abaco for Nassau, the Bahamas’ capital, on Sunday, concerns and fears were mounting nearly 300 miles away in Florida over the fate of the Haitian survivors.

The worries of South Florida’s Haitian community are rooted in the Bahamas’ history of xenophobia and contempt for Haitian migrants amid an illegal migration problem. They have gained momentum as unconfirmed photos of dead Haitians inside a church and hate-filled anti-Haitian voice notes get shared on the WhatsApp social media platform.

In one note, a woman with a Bahamian accent, responding to unfounded rumors that Haitians in Abaco were looting after Dorian, called for Haitians to be rounded up and shot in the head. Another viral note, this one by a Haitian man, accused the pastor of an influential Nassau-based mega church of preaching that Haitians are to blame for Dorian because of their belief and practice of Vodou.

Contacted by the Miami Herald, the pastor, Bishop Neil Ellis, was confused — and dismayed.

“That’s not even my theology that people are responsible for storms and hurricanes,” said Ellis, who said he was out of the country and had not preached since the hurricane. “That’s a part of nature; that’s climatic. That’s not people driven.”

Ellis said the only conversation he’s had about Haitians since Dorian was a private one. The topic of The Mudd, the destroyed Haitian shantytown in Abaco, was raised and whether the Bahamas should seek to deport Haitians.

“I said we can’t afford to do anything like that. They are our brothers and sisters,” Ellis said. “I have Haitians in my church. I have Haitian nationals on my staff. I don’t see why I would say something like that. I just hired a planeload of stuff to send to a shelter in Nassau where a lot of Haitians are. “

Djenane St. Fleur, an advocate in Broward County, said alarms are being raised in South Florida’s Haitian-American community because Haitian nationals in the Bahamas are being asked to present legal documentation in order to receive aid. She said the community needs to move cautiously.

“This happened to everybody in the Bahamas, whether they were Haitians or non-Haitians,” St. Fleur said about Dorian’s devastation. “Everybody who’s living in the Bahamas is suffering.”

During the processing of storm victims in North Eleuthera on Saturday, evacuees from Abaco — Haitians among them — were asked if they had any identification as part of the intake process. But a Miami Herald reporter observed no one being denied aid or transport because they lacked documentation.

Still, the faces of arriving Haitians bore looks of fear. Many were concerned about what would happen to them in Nassau, where those without documentations and families are being put up in local shelters.

Last week, as the relief effort continued to be hampered by the lack of airlifts, the Family Action Network Movement, led by Miami’s Marleine Bastien, called on Bahamas Prime Minister Hubert Minnis to place a moratorium on all deportations and to ease the rules to allow Haitian migrants to get services.

Minnis has not said anything about deportations, but during a visit with the Haitian community in Abaco, he told them they had nothing to fear and he would allow them to be reunited with family. He also assured them that their children would be allowed to attend school.

Nonetheless, Haitians in South Florida say they need to know what’s going on, and how they can help.

“We would like to go there and… talk to the Haitian people, who have had people die and are in need of help,” said Stann Desrosiers, the owner of Choice Airways, a Haitian-American owned airline charter company, which has been trying to organize a flight with Haitian-American activists to Great Abaco to assess the situation for themselves.

Derosiers, a pilot who counts among his fleet a 19-seat plane that can also take relief supplies, said that despite applying for flight clearance from the Bahamian authorities from the moment the storm passed, he’s yet to hear anything.

He fears Haitians will not be a priority.

Dr. Rudy Moise, a local Haitian-American physician, said he’s been getting “a lot of calls, asking how do we organize to help the Haitian people.”

“A lot of them need help,” added Moise, who visited Abaco last year and saw first-hand the dire living conditions of Haitians on the island even before Dorian’s passing.

Moise had hoped to visit Abaco on Sunday aboard a private plane, owned by a friend who runs a resort on the island. After Dorian’s passing, he said, his friend informed him that while some of his Haitian employees were accounted for, others were not.

More than a week after Dorian hit, the recovery is still in its initial stages. There’s no electricity or water on Abaco. And communications, for most people remain down. Instead, there are a steady stream of flights and boats taking survivors to Nassau, which was largely spared by the storm.

The charge d’affaires in the Haitian embassy in the Bahamas, Darlier Dorval, said while he’s concerned about the fate of the Haitians in the storm, the panic button being hit by activists and other concerned Haitians outside of the U.S. may be premature. During a visit on Saturday, he arrived with Gatorade, water and other provisions, he said.

“Since yesterday I have not slept,” he said, noting that his day began by transporting eight Haitians including four children who had arrived at the docks at 4 a.m. from Abaco to a shelter where they were given food, water and a cot to sleep on.

The best thing the Haitian community can do is organize itself to help storm victims reintegrate in Abaco and Grand Bahama, he said.

Late Sunday, the Bahamas’ National Emergency Management Agency said 3,500 people had been evacuated from the Abacos and Grand Bahama since Dorian’s passing. Though seemingly a large number, there were still hundreds left in Marsh Harbour, many of them Haitians and taking shelter at Sitoir’s Baptist church — a solid cement-block structure.

While the church lost all its windows, it remained largely intact.

Sitoir said he wouldn’t hold Sunday service because his flock was focused on staying alive and leaving the island.

Even so, a handful of his congregation had gathered to sing, cry and comfort each other.

Sitori said that the next sermon he delivers will be centered on gratitude. 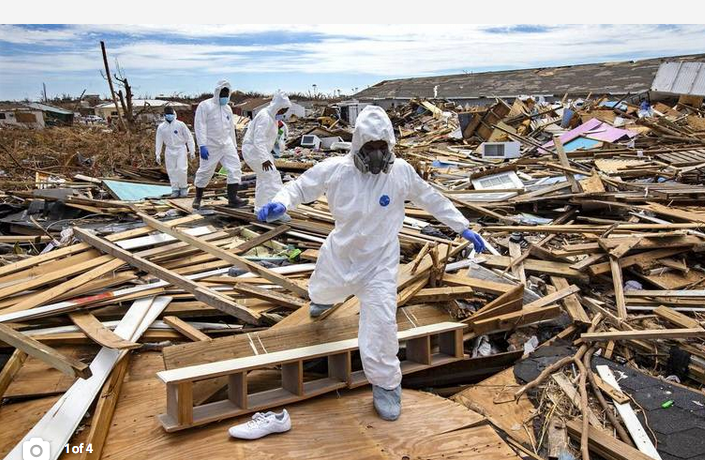