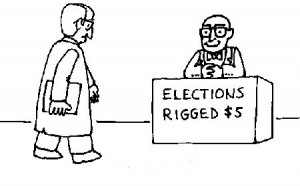 It is bad enough that the U.S., by delaying reconstruction aid to Haiti, has failed to give adequate aid to our neighbor. It is far worse that we have also cooperated in its deeply flawed election. Our government helped impose an election process upon the Haitian people that gave rise to foreseeable human-rights violations and is therefore complicit in the resulting harm.

Having helped fund and organize the elections, the U.S. should support a fair and inclusive do-over, if only to rectify its wrong.

Three fatal flaws in the electoral process were known well in advance of the fraudulent Nov. 28 elections. First, Haiti’s Provisional Electoral Council (CEP), tasked with supervising the elections, was hopelessly compromised by conflict of interest. President René Préval, who championed his “hand-picked successor,” Jude Célestin, during the election campaign, had also hand-selected the nine members of the CEP. Second, the CEP banned the participation of 15 political parties — including Fanmi Lavalas, the most popular party in the country — without offering a valid reason. Third, it was obvious that the government would fail to provide all internally displaced people with identification necessary to vote. This much was already clear when the U.S. enthusiastically invested at least $14 million into the election process.

By cooperating in an enterprise that guaranteed exclusion, the U.S. implicated itself in violating Haitians’ right to fair elections. This infringement was the root cause of the uproar that followed. Human decisions — not nature — led to the predictable injuries and deaths. The U.S. had a moral obligation to demand the implementation of inclusive and democratic policies in exchange for its decisive support. It did not do so.

For months before the elections, the State Department stalled and equivocated in the face of prominent objections and appeals. Forty-five members of Congress signed an urgent letter to Secretary of State Hillary Clinton calling for her to address the three flaws. Sen. Richard Lugar (R.-Ind.), ranking member of the Committee on Foreign Relations, criticized the CEP’s exclusions and warned of potential “chaos.” Paul Farmer, U.N. deputy special envoy to Haiti, expressed his concern that “all Haitian people and parties be allowed to participate.”

Over two dozen nongovernmental organizations and church groups with intimate knowledge of Haitian politics and society sent Clinton a letter with detailed prescriptions to mitigate the disaster. As a group of over 120 returned Peace Corps volunteers who served in the neighboring Dominican Republic, my colleagues and I also petitioned her. The State Department studiously ignored such pleas.

On Nov. 7, President Obama eloquently denounced the sham elections that had occurred in Burma, which suffered from similar failings. In contrast, Obama made no appeal to resolve the Haitian electoral defects despite the moral responsibility arising from having funded an election that would predictably trigger political crisis and violence. The U.S. failed to use its uniquely influential position as the elections’ largest financier.

The media, with few exceptions, followed Obama’s lead. They missed the intrinsic defects of the election preparations and were therefore shocked by the ensuing catastrophe. While clearly documenting widespread ballot stuffing, outdated voter lists and other irregularities, the media hardly mentioned the elections’ structural fraudulence: the exclusion of both voters and parties. Most reporting has focused on the maneuverings of three pre-approved candidates as they dispute minuscule percentages of the votes of less than one quarter of Haiti’s eligible voters. This attention falsely suggests that recounts and run-off rounds can somehow produce a legitimate president.

Further invalidating the process, the U.N. threatened to withhold resources if the elections are not accepted. It also inveigled two front-runners into withdrawing their principled calls to annul the elections. Despite this, over half of the candidates still demand annulment.

Our failure to refrain from causing foreseeable harm obligates us to undertake remedial efforts. The U.S., along with the other underwriters of the elections, should finance a do-over that includes all political parties and voters, headed by a new, credible CEP. While $30 million for new elections may seem costly, the Haitian government must have a democratic mandate to manage issues like public health and the investment of billions of dollars of aid. Furthermore, this price tag amounts to less than two weeks of the U.N. security force’s proposed budget for 2011.

Only new, fair elections can lead to a just outcome. Let’s insist that our government take responsibility for its moral failure and offer logistical and financial support to carry out inclusive elections in Haiti.