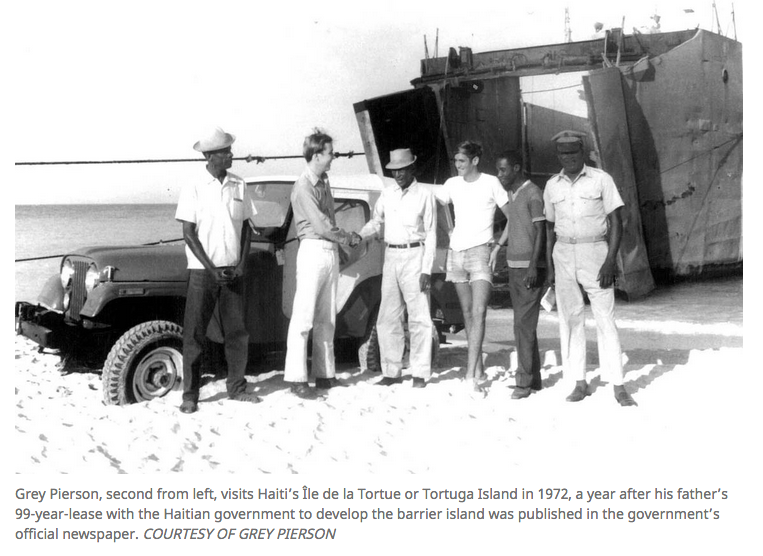 Kanye West, the eccentric rapper and producer who jetted off to Haiti in the middle of a global pandemic last month, is claiming that the president of the Caribbean country gave him an island to develop. Unfortunately for West, Haiti doesn’t own the development rights — it appears a lawyer in Texas does.

So how did a guy in Texas come to own the development rights to an island off the northern coast of Haiti?

That is a long and complicated tale. It involves egocentric Haitian dictator Francois “Papa Doc” Duvalier, a World War II minesweeper with a large antenna and a clever entrepreneur, Don Pierson, who wanted to stick it to the British for not playing the Beatles on the radio. Pierson used the ship as a station for offshore broadcasts of pop and rock ‘n roll music to British listeners. This story was too good to not make into a movie, hence the 2009 comedy “Pirate Radio.”

When the British government finally outlawed advertising on offshore commercial radio stations in 1967, Pierson’s pirate radio station aboard the ship was dead. But Duvalier’s idea was born: Buy the ship to go around the world beaming, “We love Papa Doc.”

The dictator and Haiti, however, were broke and the ship was never purchased. But Pierson and the Haitian government, seeing an opportunity, spent four years negotiating a 99-year agreement to transform the secluded Île de la Tortue and its white sandy beaches into an economic hub with hotels, an international airport and jobs. The commercial investments would be administered by a free port authority with investors and the Haitian government owning equal shares.The contract was officially recorded in the government newspaper, Le Moniteur, on April 5, 1971. Less than a month later, Duvalier was dead of a heart attack — unleashing a four-decades-long debate over the deal’s legality, and a battle by the Piersons to get Haiti to live up to the contract.

“It’s the same old, same old. I wish it weren’t but it is,” Grey Pierson said from his home in Arlington in response to West’s announcement and the dismissal of his family’s contract by yet another Haitian government. “You would think at some point, somebody would be in charge and have a molecule of sense. I have always been nice… [but] they are their own worst enemies.”

The Miami Herald first reported about Pierson’s rights to the sparsely populated, rugged island off the northwest coast of Haiti after another Haitian president, Michel Martelly, tried in 2014 to get Miami-based Carnival Corp. to develop the island’s western edge for cruise ship passengers. By then, Don Pierson had died, and son Grey had inherited the lease.

Now it seems that Martelly’s hand-picked successor, Jovenel Moïse, wants to give West the chance to do what Carnival has so far been unable to do despite signing a letter of intent with the Martelly government to develop a $70 million cruise ship port on the barrier island. 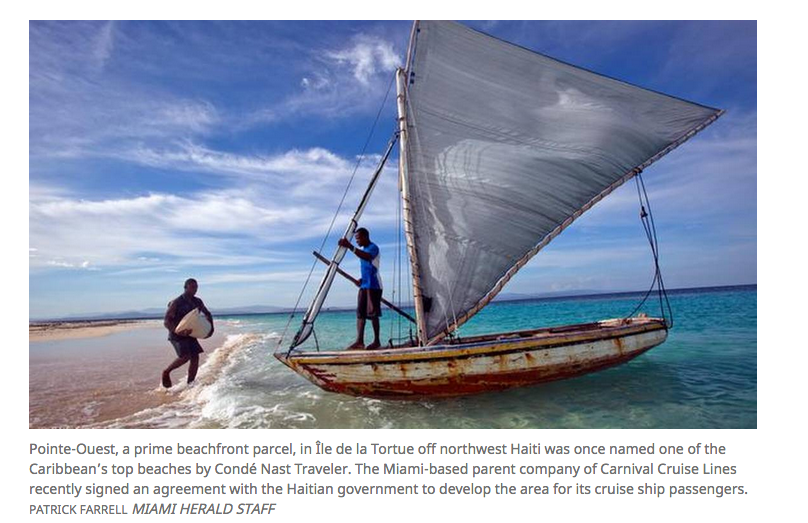 West’s claim came during a three-hour appearance on “The Joe Rogan Experience” podcast over the weekend. He spoke about a number of subjects including his U.S. presidential bid and Haiti.

“When I was with the president of Haiti, he gave us an island, me and Shervin Pishevar,” West said, referring to the Iranian-American venture capitalist and early investor in Uber who accompanied him to Haiti. “We go to Haiti and the president gives us this island to develop, to make a city of the future. And also we’re going to have the farmers and the people that live there take a percentage, take ownership of the land they have right now so that when it raises in value, they all eat, it’s what the idea is.”

Haiti’s government did not respond to a Herald request about West’s claims and whether the island in question is Île de la Tortue. Moïse took West to the island by boat and served as his personal tour guide.

During a talk with the island’s population, Moïse spoke of developing an airport on Île de la Tortue and making it attractive for tourists. He mentioned West, who was standing nearby. He described West as “a huge friend,” whom he brought to see the place, where the only tourists nowadays are desperate Haitian migrants trying to get to the United States onboard wooden sailboats.

Kanye West recently sat down with @joerogan for a 3-hour conversation. Together, the pair discussed everything from why Kanye decided to run for president, his recent trip to Haiti, president Jovenel Moise giving him & his business partners an island to develop, and more. pic.twitter.com/2g3vvgNbgr

After the Herald’s story posted online, West, taking to his Twitter account, sought to clean up his comments.

“Just to be CLEAR: WE ARE IN ENGAGED WITH HAITI’s GOVERNMENT to make a transformational INVESTMENT to bring JOBS, DEVELOPMENT, HELP SUPPORT LOCAL FARMERS and FISHERMEN and Build a new « CITY OF THE FUTURE » in a very beautiful country,” West tweeted.

In a statement dated Tuesday, Haiti’s Foreign Ministry said West’s visit was part of Moïse’s efforts to invite “the African-American community to come and explore the option of investment across the territory in a certain number of areas with potential,” and “at no time has the head of state been occupied by the false idea to sell out the national territory for any reason.”

Louis Wilson, who works for Mercury, the firm that lobbies on behalf of the Haitian government, said “the land is subject to more than a dispute — the Haitian Supreme Court upheld the cancellation of the contract in 1974.”

Pierson, responding to the claim with a copy of a U.S. State Department letter, said the Haitian court, then controlled by President-for-Life Jean-Claude “Baby Doc” Duvalier “purported to cancel the contract. However, the ‘cancellation’ was meaningless since the court did not have jurisdiction.”

“The United States government agreed that the court lacked jurisdiction, and Arthur Bonhomme (Haiti’s Ambassador to the U.S. when the court action occurred) stated flat-out that it was ‘an expropriation’ and that the court didn’t even follow Haitian law,” he said, noting the agreement called for all disputes to go before an international court. “Bottom line: The action of the Haitian Supreme Court was and is a nullity.”

Nevertheless, West’s original claim has some Haitians asking the obvious: How many times can you give away the same island?

Pierson said no one in Moïse’s administration has tried to make contact with him, though they are aware of his claims.

“I remain available, I am not hiding from anybody,” he said. “When the Carnival deal happened, I really expected to get a call because there were ways it could have been worked out that would have been beneficial to both Carnival and Haiti and me. But nope, not a word.

“Instead they apparently had a special cabinet meeting,” he added about the Martelly administration, “to discuss whether or not they should sue me for what I said in the [ Herald] article. Come on, talk about ridiculous… Exactly what did I do that was wrong? Other than point out the obvious. …I wanted to do whatever I could to help the people of Haiti. That’s what my father tried to do. That has always been our goal. We weren’t trying to hurt anyone. Anyway, their response to me being nice was …’Let’s sue Pierson. Let’s get him.’”

Roger Frizzell, a spokesman for Carnival, declined to comment. Until recently, the cruise line had on display at its Doral office a photo of executives standing on the white sand beach of an unspoiled Pointe-Ouest on Île de la Tortue.

Pierson said he believes Carnival has walked away from the deal. “It’s such a shame because I really thought we could have worked something else that would have been beneficial to all involved.”

As for West, and Moïse allegedly gifting the rap mogul the island, that’s another matter.

“Talk about a slap in the face to the Haitian people,” Pierson said. “The people of Haiti will be very angry. The sheer gall that just because someone is famous, the president is falling all over himself to give things away to this guy. I suspect they will not be happy at all.

“I don’t expect it to go anywhere,’ he added, emphasizing his claim. “To me it’s like saying the coronavirus is all over with. Well, except for the fact that it’s not. You can say anything you want, but that doesn’t automatically make it true.”