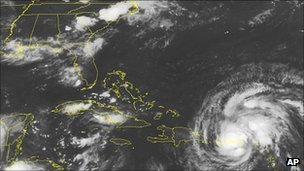 Irene is now officially a hurricane

Tropical Storm Irene has turned into a hurricane – the first of the Atlantic hurricane season – over Puerto Rico.

Haiti, where hundreds of thousands of people still live in tents after last year’s earthquake, is in Irene’s projected path, according to the National Hurricane Center in Miami.

It is next set to hit the Dominican Republic, and may also hit Florida, Georgia and the Carolinas in the US.

That puts it just above the official strength of a hurricane. At 09:00 GMT it was centred about 25 miles (40km) west of San Juan, Puerto Rico, and moving west-northwest at around 12mph.

Haiti, which suffers from extensive deforestation and poor infrastructure, is particularly vulnerable to the heavy rains Irene is expected to dump.

In June, more than 20 Haitians were killed by mudslides and flash floods.

The country is also still struggling to recover from a devastating earthquake in January 2010, which officials said killed as many as 230,000 people, leaving more than 1 million homeless.

According to the International Organization for Migration, some 634,000 Haitians still live in camps; other estimates put that figure at 375,000.