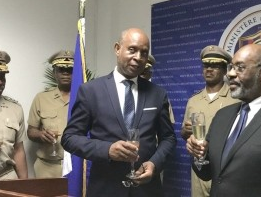 The Minister of Defense, Mr. Enold Joseph, was installed yesterday, Monday, September 17th. The ceremony was held at the Ministry premises in the presence of the Director General of the MD, Colonel Louis Marcelin Daniel, the Minister and the Director General of the Ministry of the Interior and Territorial Communities, Messrs. Jean Marie Reynaldo Brunet and Fednel Monchery respectively, of executives and employees of the Ministry of Defense, relatives and friends of the new minister.

In his special address, the new Defense Ministry official thanked the President of the Republic, Jovenel Moïse, as well as the Prime Minister Jean Henry Céant for having set his sights on himself in order to carry out the government policy on national defense.

Aware of the challenges ahead, Mr Joseph said he was measuring the enormity of his responsibility by promising to work closely with the Ministry of Defense’s staff and employees to continue the work initiated by his predecessor, the Outgoing Minister Hervé Dénis, to which he made very appreciative remarks.

For his part, the Minister of the Interior who carried out this installation, drew the attention of the new tenant of the Ministry on the peculiarity of the national and international context which surrounds his taking office. As a colleague and collaborator, he made a point of inviting Enold Joseph to get down to work quickly in order to tackle the climatic hazards faced by the country during the mid-hurricane season.

He also reminded the new Minister of Defense of the challenges of updating the FADH for the country. He invited his counterpart to contribute to the development and implementation of the national defense policy.

Minister Joseph ended his speech by renewing his commitment to work towards the endowment of the country with an army worthy of the national epic.