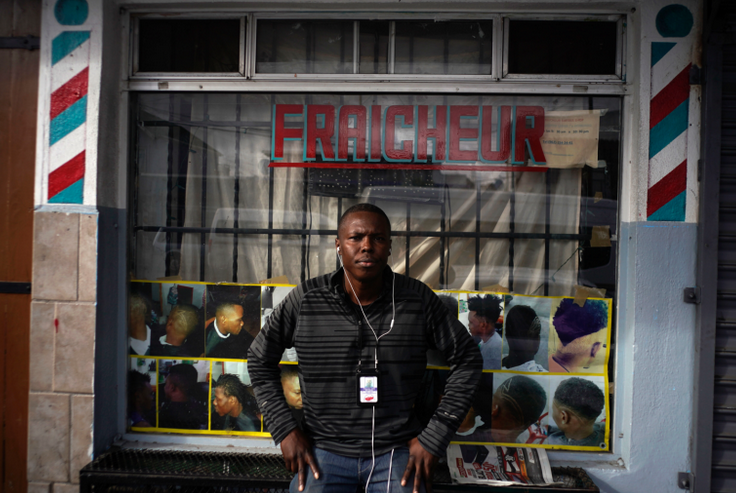 Philocles Julda, 44, poses for a photo in front of a Haitian barbershop in Tijuana, Mexico, Thursday, Nov. 22, 2018. Julda is part of a group of Haitian immigrants who started the Association of the Defense of Haitian Migrants to give the community a place to help itself with everything from Spanish lessons to paying medical bills. (AP Photo/Ramon Espinosa)

TIJUANA, Mexico – A few blocks from a shelter housing members of a Central American migrant caravan sits the first Haitian restaurant to open in Tijuana, a bustling eatery that has come to symbolize an immigrant success story in this Mexican border city where Haitians are now a part of the fabric, landing jobs, studying and marrying locals.

Tijuana welcomed thousands of Haitians to pursue a scaled-down American dream south of the border after the U.S. closed its doors on them more than two years ago. But it has not shown the same tolerance so far toward the Central Americans, who have met official complaints and anti-caravan protests even though most of the people in this city are migrants or the offspring of migrants.

That’s raising questions about how the newest group will integrate if it doesn’t don’t get into the U.S. or return home.

Tijuana Mayor Juan Manuel Gastelum has made a point of saying the city is not happy with the caravan migrants who began arriving last week, and he compared the Central American group unfavorably with the roughly 3,000 Haitians who ended up staying after their bid to reach the U.S. failed.

“The Haitians arrived with their papers, with a clear vision,” Gastelum said in an interview posted on the city’s Facebook page. They came “in an orderly way, they never asked us for food or shelter,” renting apartments and making their own food. He said the Haitians found jobs and “inserted themselves in the city’s economy” and had not been involved in any disturbances.

By contrast, Gastelum said, the caravan of Central Americans “had arrived all of sudden, with a lot of people — not all … but a lot — were aggressive and cocky.”

Victor Clark-Alfaro, a professor of Latin American studies at San Diego State University who lives in Tijuana, attributes the backlash to the way the caravan arrived — suddenly with thousands pouring in. Others point to social media and the hostile rhetoric of U.S. President Donald Trump, who said it harbored criminals and gang members and was planning an “invasion.”

Many also say the actions of a few are tarnishing the image of the roughly 4,000 migrants who are camped in Tijuana. In the past week, city officials have arrested three dozen caravan members for drug possession, public intoxication, disturbing the peace and resisting police, and said they would be deported to their home countries.

It’s also only been months since an earlier caravan of Central Americans arrived, and some of them are still in the city waiting to get asylum in the U.S. That has added to fears here that it could be the start of a never-ending deluge.

U.S. border inspectors are processing only about 100 asylum claims a day at Tijuana’s main crossing to San Diego, and there was already a waiting list of 3,000 when the new migrants arrived, so most will have to wait months to even be considered for asylum.

Tijuana has a long history as a kind of Ellis Island for U.S.-bound migrants. It receives up to 80,000 a year from across Mexico, Latin America and more recently as far away as India and Africa. The city has large pockets of Chinese and Korean immigrants.

Central Americans have been coming to the city since the civil wars of the 80s in El Salvador, Nicaragua and Guatemala.

Many in the newly arrived caravan, however, are destitute people who left their homelands at the spur of the moment and have been utterly dependent on handouts along their journey.

Many of the Haitians, meanwhile, arrived with at least some resources after working in Brazil, though despite what the mayor said, they also stayed at shelters after taking an accidental route to Tijuana from their impoverished Caribbean homeland. The last group of Haitians moved out of the Padre Chava shelter in April.

Brazil and its neighbors took in the Haitians after that country’s 2010 earthquake. As construction jobs for the 2016 Summer Olympics ended and Brazil’s economy slumped, they crossed 10 countries by plane, boat, bus and on foot to San Diego, where U.S. authorities initially let them in on humanitarian grounds.

Then President Barack Obama shifted course in 2016 and started deporting Haitian arrivals. Many decided to stay in Mexico after the government gave them temporary transit permits and have since applied for Mexican residency. The majority in the Central American caravan so far have refused Mexico’s repeated offers of residency or asylum and vowed to cross the border.

Many of the Haitians also have college degrees and have been recruited to work for factories that export to the U.S. Some can be found waiting tables and worshipping at congregations that have even added services in Creole.

In the window is a sign for the Association of the Defense of Haitian Migrants. Philocles Julda, 44, is one of 11 Haitian immigrants who started the group a year ago to give the community a place to help itself with everything from Spanish lessons to paying medical bills.

Julda said he too wanted to get to the U.S. when he first arrived to Tijuana and still wishes he was earning dollars, but said he has been able to make a life here. He works at a factory.

“I feel for the migrants who are arriving from other countries just like we did,” he said. “But you do adapt.”

And work is plentiful in Tijuana, whose economy has been growing and whose factories have thousands of openings.

“We have been looking for workers for quite a while,” said Alejandrina Yanez, who works in human resources at a factory that makes warehouse storage racks for Costco, Home Depot and other international companies.

Yanez went to the Padre Chava shelter Wednesday to see if any migrants were interested in jobs that pay about $100 a week.

Omin Velasquez, 26, of Tocoa, Honduras, was intrigued. Velasquez came with the caravan but decided not to continue on to the U.S. after seeing the border wall topped with newly-installed rows of razor wire.

He said it took him some days to decide, but he now feels that there are enough opportunities in Tijuana and support from locals that it’s not worth the risk of crossing into the U.S. He has started his paperwork to get a Mexican visa to stay. 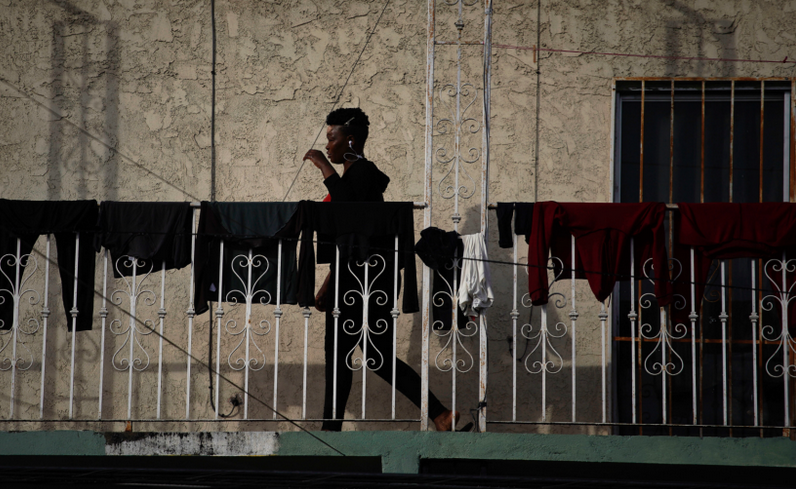 A Haitian woman walks past clothes drying on a rail at an apartment where a group of Haitians live, in Tijuana, Mexico, Thursday, Nov. 22, 2018. The border town welcomed thousands of Haitians to pursue a scaled-down American dream south of the border after the US closed its doors on them more than two years ago. (AP Photo/Ramon Espinosa)