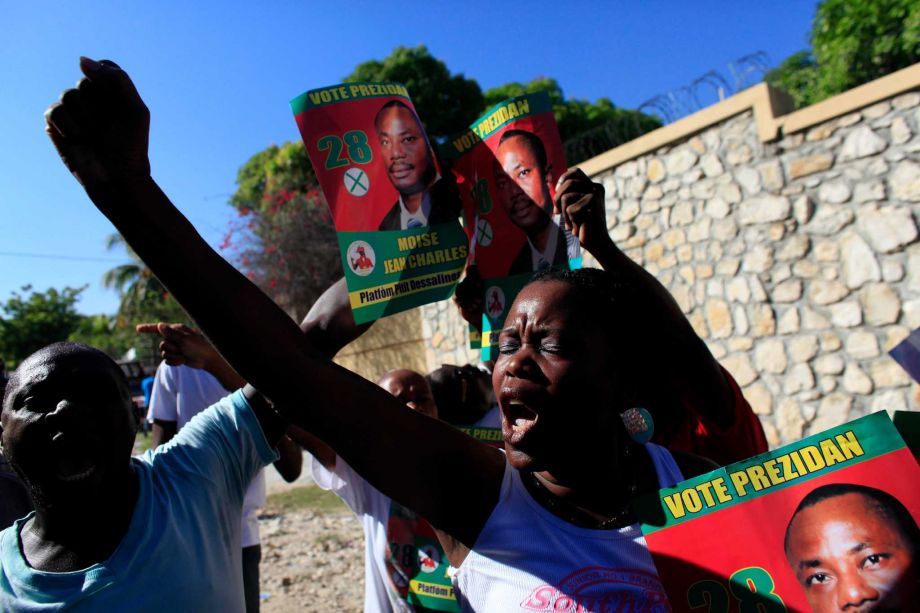 PORT-AU-PRINCE, Haiti (AP) — One of Haiti’s top presidential candidates insisted Thursday that ballots checked with his name have been destroyed or discarded, prompting small groups of supporters to burn tire barricades in a few sections of the country’s capital.

Former Sen. Moise Jean-Charles, candidate of the Petit Dessalines faction, is considered one of a few major contenders out of the 54 hopefuls who appeared on presidential ballots in Sunday’s first-round elections. The two top finishers are expected to compete in a Dec. 27 runoff.

With official preliminary results still days away, tire-burning supporters of Jean-Charles said they discovered partially burned ballots on Thursday behind the concrete wall of a home in the Port-au-Prince neighborhood of Delmas 41. The candidate insists that numerous ballots supporting his bid have gone missing elsewhere.

Without discussing specifics or presenting evidence, Jean-Charles told reporters at a Thursday press conference that there was also a plot at a tabulation center in Port-au-Prince to prevent votes in his favor from being entered into computers.

“This is going to lead to political turmoil,” he warned, prompting cheers from about three dozen backers gathered at a Port-au-Prince school.

The tabulation warehouse is under guard by police and U.N. peacekeepers and Haitian electoral workers are monitored by a rotating cast of international observers 24 hours a day.

Although it is prohibited for results to be released by anyone other than the Provisional Electoral Council, Jean-Charles’ camp released its own calculations from Sunday’s vote after reviewing 85 percent of the returns. He insisted Thursday that he dominated voting in half of Haiti’s 10 departments and accused the government-backed candidate’s team of trying to steal the elections.

It was not immediately clear if the council planned on sanctioning Jean-Charles or any other candidates for releasing such information.

“I don’t think Moise Jean-Charles has ever told the truth in his life. This looks like something he planned himself,” Mayard-Paul said of the partially burned ballots.

Jean-Charles was one of several opposition lawmakers whose disagreements with Martelly’s administration resulted in lengthy political gridlock. He is a career politician who brands himself as a voice for Haiti’s poor and disenfranchised.

On Thursday, Jean-Charles vowed to fight for a spot in the runoffs, which he said would be automatic if the elections are honest. “Either elections or revolution,” he told supporters of his Petit Dessalines faction, named after a hero of the Haitian Revolution.

Moise Jean-Charles finished 4th, behind Jovenel Moise, Jude Celestin and Maryse Narcisse. He has some local support but not on a nationwide basis.

His candidacy shouldn’t have been accepted sine he is, among other things, a murderer and convicted felon. Other than that, he is a terrorist bent upon creating chaos for the Dominican Republic.

Should be in jail.

Not the National Palace.