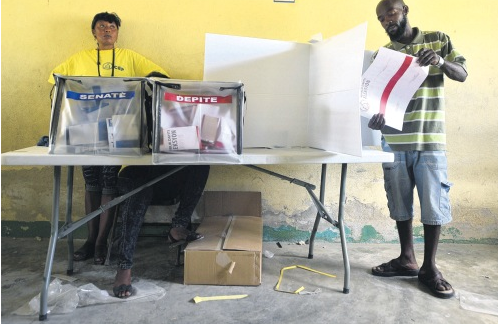 PORT-AU-PRINCE, Haiti (CMC) — A Caribbean Community (Caricom) team that observed the legislative and first-round presidential elections in Haiti last Sunday is warning of “anomalies” that, if not corrected, “could lead to undesirable sequels in the future”.

The 11-member team headed by the chairman of the Guyana Elections Commission (GECOM), Dr Steve Surujbally, said “too many anomalies pertaining to voting norms exist”, but noted “whether these were accidental or due to deficiencies in the training of the CEP (Provisional Electoral Council) cadre could not be ascertained”.

It noted that the CEP does not recruit its own staff directly, rather extraneous bodies such as non-governmental organisations, political parties and civil society organisations, propose candidates for selection.

“Varying methodologies in the poll practices, on occasion, were used by CEP officers during the course of the day; for example, different fingers were stained as a form of identification. This would tend to reflect that the training of the CEP E-Day cadre either was not uniform, or that the CEP staff interpreted the processes differently despite common training,” the Caricom team said.

It said also that the inadequacy of physical space in polling stations led to the secrecy of the ballot being compromised, with people inside and outside of the polling stations being able to see for whom the voter was casting his or her ballot.

The Caricom team also warned that the inadequacy of physical space could lead to the possible closure of a polling station, if it rained, since there were polling stations conducting business in the open air.

It said the situation in which CEP staff had to operate was in itself not conducive to efficiency, and on some occasions led to frayed nerves.

“However, at no time did the team observe altercations between CEP officials and voters evolving into physical interactions. Nevertheless, it was the considered opinion of the team that five polling stations in one room would obviously not be conducive to an optimal working environment”.

The Caricom Observer team said it was also calling for “more transparency” at the Ttabulation centre, “if the methodology of processing the Tally Sheets — not the content of the Tally Sheets –was shared with political parties and other important stakeholders.

“It would help matters if, prior to the Elections, relevant laws were to be enacted, so as to assist any Electoral Court/Tribunal in carrying out its deliberations. The permanency of the Electoral Council would ensure that that critical body enjoys greater autonomy and authority in handling electoral matters, particularly as it pertains to political parties.”

Earlier this week, the Electoral Observation Mission of the Organization of American States (OAS/EOM) to Haiti called on all political parties, as well as the electorate, “to patiently await” the outcome of Sunday’s legislative and presidential elections.

At least 53 candidates were seeking to replace President Michel Martelly as head of State in the first round of the presidential election, while voters also cast ballots to elect members to the legislature.

The director general of the National Police of Haiti (PNH), Godson Orelus, told a news conference on Sunday night that police had made 234 arrests and seized 13 firearms and four vehicles during Sunday’s voting.

In addition, he said, a policeman carrying ballots in his private vehicle, in the constituency of Cite Soleil, had been arrested an placed in isolation.