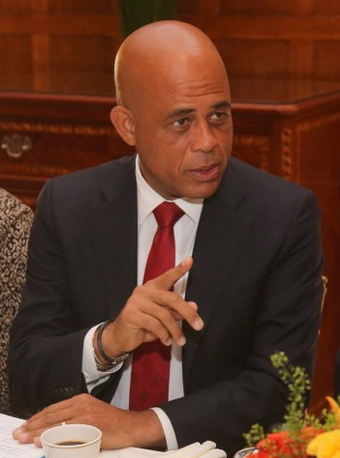 Sweet Mickey dazzled the Les Cayes Carnival as EDH moved to provide all night electricity for the area. Even though “Carnival” was officially cancelled, the local team moved forward. Thousands crowded the streets in a spontaneous night of celebration.

The appearance of Michel Martelly showed that the people still loved him as he walked through the crowd, embracing well-wishers as they mobbed him like a Rock Star!!

At one point, during his performance Martelly gave a short speech on the existing political fiasco. The main thrust of his words hit directly upon the permanence of a President vs that of a Prime Minister. “You cannot fire a President but a PM can be removed by Parliament. Jovenel is here to stay…..” Later, Martelly declared his candidacy for the Presidency 2022.   Michel ricocheted from Les Cayes to continue Carnival in Correfour.

Our ex and potentially future President gave an interview before departing Les Cayes.