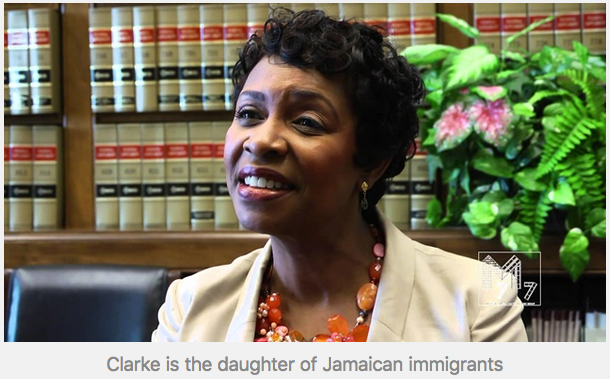 On Friday, the US Department of Homeland Security (DHS) announced that it will offer extended TPS for Haiti, El Salvador, Nicaragua and Sudan due to ongoing litigation in the case, Ramos v. Nielsen, spearheaded by TPS holders.

“To be clear, the Trump Administration was forced to act due to ongoing litigation spearheaded by TPS holders,” Clarke, the daughter of Jamaican immigrants, told the Caribbean Media Corporation, in an exclusive interview, on Saturday.

“While I welcome this news, this temporary stop-gap still leaves far too many families in a perpetual state of fear and anxiety,” added the representative for the 9th Congressional District in Brooklyn, New York.

Brooklyn is considered to be the home for the second largest concentration of Haitians in the US after Miami.

“Additionally, thousands of DED (Deferred Enforced Departure) holders will lose their status in the coming weeks,” Clarke said. “I urge the administration (Trump) to also act on their behalf without delay.”

She said the Trump administration should “no longer afford to play political games with people’s lives.

“We need comprehensive immigration reform that protects DREAMers, TPS and DED beneficiaries,” said Clarke, referring to children who came to the United States very young with their parents illegally and now seek to regularize their status.

Trump has rescinded the policy, known as the Deferred Action for Early Childhood Arrivals, or DREAM Act, which was instituted under the Obama Administration. But federal district judges have put a temporary hold in the institution of the policy.

“That’s why I am proud to be a co-lead on the DREAM and Promise Act (HR 6),” Clarke said. “This bill will include a path to citizenship for DREAMers, as well as for people covered by Temporary Protected Status and Deferred Enforced Departure.”

She said the bill “builds upon the DREAM Act, the American Promise Act and the ASPIRE TPS Act, which I introduced in the last (session of) Congress.”

On Friday, DHS filed notice in the Federal Register that it was extending TPS for nationals from Haiti, El Salvador, Nicaragua and Sudan until January 2, 2020.

Clarke said the extension came in response to a preliminary injunction issued by the US District Court for the Northern District of California in a lawsuit challenging plans to terminate TPS for undocumented immigrants from the four countries.

The US normally grants TPS to immigrants from certain countries afflicted by natural disasters, continuing armed conflict or other extraordinary conditions.

In 2017, the DHS said that it was terminating TPS for recipients from the four countries in late 2018 and throughout 2019.

Trump administration officials said conditions in those countries had improved and that the migrants could safely return, even as the US Department of State warned against travel to those nations.

While TPS for the four countries will continue, as long as the preliminary injunction remains effective, the Trump administration has appealed the injunction to the US Court of Appeals for the 9th Circuit.

“We remain grateful to and inspired by the TPS holders and US citizen children in this case challenging the legality of DHS’s decision to terminate TPS for these four countries,” said Jill Marie Bussey, director of advocacy at the Washington-based Catholic Legal Immigration Network, an immigration advocacy organization.

“We are mindful that the preliminary injunction is temporary in nature and tenuous as the government has sought to overturn it on appeal,” she added.

Bussey urged the US Congress to “provide the long-term solutions that are urgently needed to provide permanent protection” to TPS recipients from Haiti and other countries.

Before Friday’s temporary extension of TPS, the President had set the expiration of TPS for Haitians for July 2019.