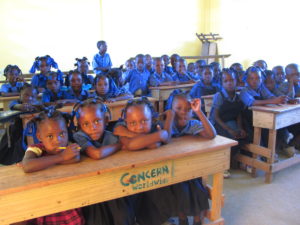 Huffington Post:This past Saturday, January 12, 2013 marked the third anniversary of the 7.0 magnitude earthquake that rocked Port-au-Prince in 2010. Haiti, a country that had already been crippled by poverty and poor infrastructure, suffered immense devastation in its capital city and surrounding regions. Over 230,000 people lost their lives and an additional 1.5 million were left homeless as a result of the natural disaster. Three years later, Haiti has taken steps toward rebuilding its broken infrastructure and, with the help of the international community, is on track to make a recovery that will strengthen the nation and its people.

Education, one of the most powerful and effective means of eradicating poverty around the world, has brought new prospects to a broken Haiti. Without an education, life expectancy decreases, AIDS and other diseases increase as a result of minimal prevention, and people are often stuck in the devastating cycle of poverty because they do not have a job. With all of the benefits of an education, you would think that countries all over the world are placing an emphasis on education to better their people, right?

When the United Nations created the Millennium Development Goals in 2000, it vowed to secure access to education for all children by 2015. In Haiti, before the earthquake, over 50 percent of children were not attending school. These children were those who would not be able to read, write, earn better wages, care for their health, have a voice in their communities, or ever be aware of their rights and opportunities. Of the 50 percent of children who were attending school, many were taught by untrained and underpaid teachers in overcrowded, unhealthy, and poorly equipped classrooms. As in many other impoverished nations, students in Haiti are commonly taught in classes with 70 other students in classrooms with no electricity, books, desks, or chairs. Haiti’s broken education system had taken a toll on the country and had hurt the nation’s ability to become sustainable.

In Haiti, it was this lack of education that debilitated its people and left the country so vulnerable to natural disasters like the earthquake in 2010. Overcome with destruction, lack of food or clean water, and disease outbreaks, the Haitian people were dependent on foreign aid for survival. For most of the months following the earthquake, Haiti was swamped with organizations from all over the world delivering emergency aid to those in need. Three years later, Haiti is now looking towards long-term recovery and how it can rebuild itself from the rubble left behind. In an effort to focus on long-term recovery, Haiti has placed a new importance on education to ensure that its citizens have control over their own futures.

Organizations like Concern Worldwide have launched campaigns to build schools, train teachers, provide books and materials, and furnish classrooms with desks and chairs in Haiti. Concern’s Your Dollar Our Future campaign, which was started in 2011, has since provided access to education for over 2,400 students who lost their homes in the earthquake and trained over 80 teachers to provide higher quality education.

With organizations working with Haitians and the government to make education more accessible to all children, the number of students attending school has been higher than ever before. Thanks to Haitian President Michel Martelly, the Ministry of National Education and Vocational Training in Haiti has begun the rollout of a plan to get 1.5 million students in school by 2016, improve curriculum, train teachers, and set new standards for licensing schools. The Haiti Demographic and Health Survey (DHS) shows that 77 percent of children ages 6-11 attended primary school in 2012 compared to fewer than 50 percent in 2005. With increasing numbers of students attending school, it is no wonder that malnutrition in children and the under-five mortality rate in Haiti have started to decrease. These numbers do not only reflect the benefits of receiving an education, but also highlight the potential that Haiti’s future generation has to lift itself out of poverty.

But this begs the question: Do disasters like the 2010 earthquake that received international media coverage need to happen in order for impoverished communities around the world to see improvements? How do we as a global community determine the appropriate time to assist those in need? Following the earthquake, the scale of international support and investment made it possible to really focus on eliminating the barriers to education. It is unfortunate that it took such a devastating catastrophe to bring attention to such a fundamental right as education. This, however, seems to be echoed throughout society today. After decades of gun violence and killings in the United States, the U.S. government has only now begun recent talks on gun control laws in the wake of the Sandy Hook Elementary School shooting.

No matter what is being shown in the media, or isn’t being shown for that matter, students can always speak out and take action in supporting a worthy cause. Every year around the anniversary of the earthquake, my high school holds fundraisers to support the efforts of organizations like Concern Worldwide in Haiti. The funds we raised last year all went toward the Your Dollar Our Future campaign to provide access to education for thousands of children in Haiti. The Hands for Haiti banner has become a symbol of students and teachers coming together each year at my school to show their support for Haiti’s youth. What started out as a fundraising activity immediately after the 2010 earthquake is now an annual tradition for my school community. Each year, students and teachers can donate $1 to place their handprint on a banner that is proudly hung in honor of the ongoing support for Haiti. One of the Hands for Haiti banners from years past was even sent to a school in Port-au-Prince that was funded in part by the efforts of passionate students working hard to make a difference.

To me, there is no better cause for students to get more involved in than education rights — it is an issue that students can relate to and connect with. We all remember our first days of high school, those special teachers, and favorite books that we’ve read; however, those memories do not exist for those who do not have access to a school, desk, math book, or even a pencil. Most of us cannot imagine the challenges that an individual who has not received an education must face, let alone the challenges of a nation that can only provide an education to half its population. If Haiti is to ever become a self-sustaining nation, it must continue to invest in education for the generations that will one day lead the country out of poverty.