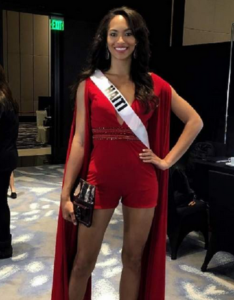 MANILA – Haiti’s Raquel Pelissier does not regret anything even if she failed to win the Miss Universe crown for her country.

Pelissier, a model from Port-au-Prince who survived the 2010 earthquake in the Caribbean country, was named first runner-up, while France’s Iris Mittenaere was crowned Miss Universe 2016.

“I’m feeling great. I’m feeling awesome. I am happy, I am so blessed I could make people recognize that Haiti is great and Haiti is wonderful, that we are worth being here in Miss Universe,” she said.

“I would not change a thing because things happen because God wanted it that way. If I have to be first runner up, this is what has to happen. I am just happy,” she added.

If there is one thing she will miss most about the Philippines, Pelissier said it would be the Filipino hospitality.

Prior to the competition, Pelissier almost didn’t make it to the Philippines because its government was unable to support her in light of recent disasters that hit Haiti.

Determined to represent Haiti in the pageant, Pelissier took to the internet to raise funds.