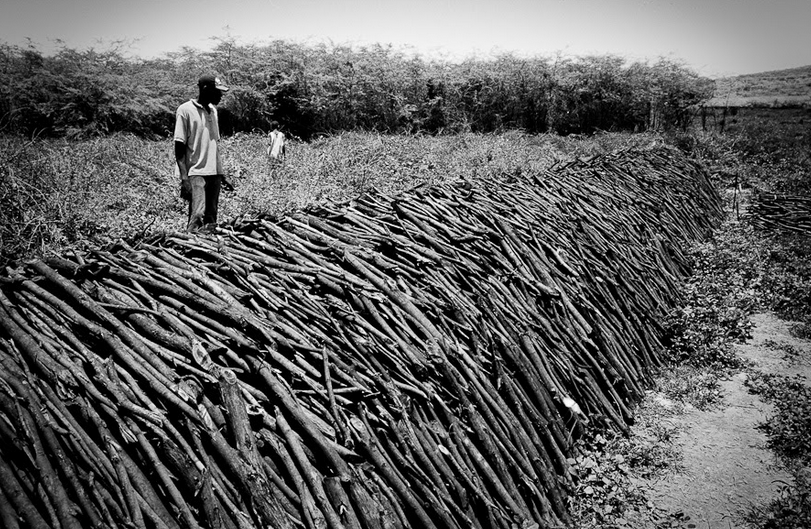 MANICHE, Haiti –  Pungent wood smoke wafts daily across the hinterlands of Haiti’s southern peninsula, where villagers stack smoldering wood beneath dirt mounds to make the charcoal that nearly all the urban households in the country use to cook every meal.

For decades, authorities and development workers have denounced such rural charcoal makers for stripping the nation’s forests, sending topsoil to sea and helping make Haiti the poorest country in the Americas. The stigma is so great that few openly admit their involvement.

But this view is starting to change due to a growing body of research suggesting much of the blame for Haiti’s deforestation lies elsewhere — and that a regulated use of wood-based charcoal might be able to provide livelihoods without decimating mangroves and other remaining natural forests.

“Charcoal doesn’t need to be the enemy. We know how to make it without killing the land,” said Victor Moise, leader of a rural collective in southwest Maniche, where last year’s Hurricane Matthew split mature trees like matchsticks and devastated crops while sparing young, fast-growing trees intended for charcoal.

Members of Moise’s collective harvest cassia and acacia trees while leaving the roots to regrow in rows intercropped with beans and yams. That helps hold topsoil that can be washed down steep slopes when only erosive food crops such as corn are grown.

New studies suggest that lots like these have actually increased tree cover in some areas and charcoal is not the “environmental scourge it has been made out to be,” said Chris Ward, director of a reforestation initiative called “Haiti Takes Root” that is part of Hollywood actor Sean Penn’s J/P Haitian Relief Organization.

“We believe that charcoal can actually be part of the solution to Haiti’s deforestation problem,” said Ward, whose nonprofit is co-funding a World Bank-led report to analyze the amount of charcoal brought to the capital of Port-au-Prince and pinpoint where it originates to assist policymakers.

Some influential Haitian officials, such as Environment Minister Simon Desras, advocate creation of a regulated, orderly charcoal sector, with a network of “energy forests” planted to produce wood for charcoal and firewood and strengthened surveillance to protect zones where wood cutting is off-limits.

“Charcoal can be sustainable if we’re growing fast-growing trees and building many energy forests,” Desras told The Associated Press. “We also must change the behavior of the people so they respect the protected areas.”

Similar experiments are well underway in other charcoal-burning countries struggling with deforestation including Tanzania and Kenya.

Haiti has long had a reputation as an environmental wasteland, with numerous published reports asserting that the local charcoal industry has transformed the impoverished country into a moonscape of bedrock, with forest cover of only 2 percent to 4 percent.

But while there is no shortage of stripped hillsides, researchers analyzing satellite and aerial images in recent years have debunked that grim statistic and now say forests still cover about a third of the mountainous country.

The longstanding assertion that charcoal production is responsible for Haiti’s denuded forests and must be eliminated to spur reforestation is misguided, according to a recent World Bank report.

“Much evidence exists that the charcoal trade in Haiti occurred after much of the deforestation of original forests and that charcoal practices are currently meeting urban energy needs,” the report says.

One thing is certain: Haiti has been dealing with deforestation for most of its history. French colonizers destroyed tens of thousands of acres of virgin forest to plant the cane that once made Haiti the world’s largest sugar producer. More wood was cut to fuel mills. Entire forests were shipped to make furniture of mahogany and red dyes from a spiny shrub called campeachy.

“Once the land has been cleared and farmed it’s highly unlikely it is going to be able to be reforested,” said Lea, who argues the government should encourage charcoal industry solutions rather than simply ignoring or opposing it.

Charcoal production in managed fuel-wood plots can both reduce pressure on remaining forests and fragile environments while providing income, according to Haiti’s office of the United Nations Environment Program. It advocates a sustainable charcoal system in southern Haiti with fast-growing trees and more efficient kilns, among other goals.

Even though propane can be a bit cheaper, nobody sees imported gas or other energy sources replacing charcoal anytime soon in Haiti because of cooking traditions and practical realities.

The homegrown energy sector, despite a history of toothless bans against it, saves cash-strapped Haiti significant amounts of foreign exchange.

While rural families burn firewood to cook their own meals, they will produce charcoal for sale to pay school fees and other expenses.

Charcoal producers say they share a strong interest in rebuilding Haiti’s woodlands. They know the stakes are high.

“We grow trees knowing we’ll cut them for money. But we let them regrow and plant more,” said Moise, as the piping of insects filled a grove with young cassia trees. “What we need is a little help.”