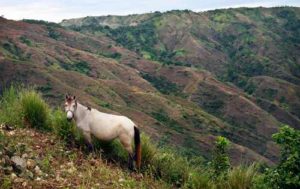 Haiti is the poorest country in the Western Hemisphere, a fact which an op/ed in today’s New York Times notes is an inevitable catchphrase in any article about the hapless country occupying the western third of Hispaniola. The op/ed, Haiti Can Be Rich Again, by Laurent Dubois and Deborah Jensen, both researchers at Duke University’s Haiti Humanities Laboratory, outlines some of the sad history of the second country in the Western Hemisphere to gain independence from European colonial powers. The op/ed describes how earlier forms of subsistence farming adequately sustained Haitians before the U.S. Marines abetted in the 20th century the imposition of top/down centralized government control over the economy. What do do now after the recent devastation visited on the country by an earthquake and a hurricane?

Municipal governments should construct properly equipped marketplaces for the women who sell rural produce. The Haitian state should develop trade policies aimed at protecting the agricultural sector, and take the lead in fixing roads and ports, confronting deforestation and improving systems of water management. Foreign organizations working in the country can help simply by making it a policy to buy food and other goods from local producers.

The return on the investment in the rural economy would be self-reliance, the alleviation of dangerous overcrowding in cities and, most important, a path toward ending Haiti’s now chronic problems of malnutrition and food insecurity. As Haitians look to rebuild in 2012, the best blueprints will come from their own proud and vibrant history.

So far so vague. For example, what do they mean by “confronting deforestation and improving systems of water management”? Nowhere in the op/ed do the researchers mention the words “property rights.” Haiti is deforested not because it’s poor, but it’s deforested (and poor) because Haitians do not have secure property rights. The same problem applies to mismanaged water supplies. Helping Haitians to establish secure property rights to land would go a long way toward addressing the problems mentioned in the op/ed.

Consider that a Haitian migrant who manages to float across the Caribbean to the U.S. is nearly 75 times more productive than one who stays home. Why is that?

The answer is not the obvious one: The U.S. has more machinery or tools or natural resources. Instead, according to research by the World Bank, it is because the average American has access to over $628,000 in intangible wealth, while the stay-at-home Haitian’s intangible wealth is just $8,000. Intangible wealth consists of, among other things, secure property rights, honest courts, the rule of law, and a citizenry who can read and write.

While implementing the op/ed’s well-meaning proposals would marginally improve Haiti’s problems, the researchers miss the most important reasons why Haitians remain poor.