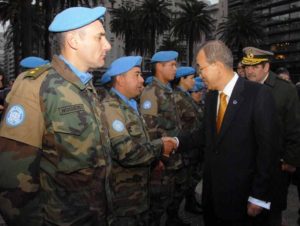 The case against five United Nations peacekeepers caught on tape in an alleged sexual assault on a Haitian teenager has apparently stalled and the accused soldiers have been freed, a UN official has confirmed.

The men were sent back to Uruguay last summer to face trial after cell phone video obtained by ABC News appeared to show uniformed soldiers assaulting an 18-year-old Haitian as he is held down on a mattress in a UN compound in Port Salut, Haiti. The video shows soldiers in their UN uniforms, one of them with his pants down. The victim’s mother said her son was taken inside the base by five UN soldiers who accused him of making fun of them.

“They beat and maltreated him,” Rose-Marie Jean told ABC News in an interview. “Two raped him from behind.”

The release of the accused men comes at an unsettling time for the UN in Haiti, two years after a devastating earthquake rocked the struggling island nation, and three months after the grainy video of the alleged assault triggered street protests from those who believe international peacekeepers are able to abuse Haitian citizens with impunity. Since the video surfaced, more UN peacekeepers — this time from Brazil — have been accused of beating Haitian civilians.

But word that the men alleged to be involved in the videotaped incident were freed poses new problems for senior United Nations officials, who told ABC News they shared the outrage over what they saw on the tape, and would stand behind the UN’s pledge to end abuses by anyone in the blue-helmeted UN forces.

“The secretary general of the United Nations has a zero tolerance policy for any kind of misbehavior by soldiers,” Assistant Secretary General Anthony Banbury told ABC News at the time.

At a UN Security Council meeting last summer, Uruguay’s ambassador to the United Nations apologized profusely. “The government and the people of Uruguay feel extremely ashamed at the denunciation of presumed misconduct and abuse and sexual exploitation,” Ambassador Jose Luis Cancela said.

Banbury noted at the time that the president of Uruguay wrote a letter to the Haitian people after the incident with a promise to deliver justice in the case.

“When there’s a commitment by the head of state of a country to thoroughly investigate a crime committed in a peacekeeping mission, I’m pretty confident in that expression of commitment,” he said.

Asked last week about the latest developments, UN spokeswoman Anayansi Lopez said the men were released from jail while investigators try to locate the 18-year-old Haitian victim and obtain his testimony — something the Uruguayans said they had been unable to do. Once that occurs, she said, the men will be brought back for trial.

“The recent release of the soldiers, pending completion of the civilian trial, will not circumvent the possibility that the soldiers be re-imprisoned, should they be found guilty and sentenced accordingly,” Lopez said.

The victim’s identity and address are well known in the village of Port Salut, where the alleged assault occurred, though it is unclear if he has remained in the town.

Mark Weisbrot, co-director of the Washington-based Center for Economic and Policy Research, has been following the case closely, and told ABC News he was disappointed to learn the accused soldiers have been set free.

“These horrifying assaults make a mockery of the UN’s supposed ‘zero tolerance’ policy for abuse,” Weisbrot said. “The UN should take such allegations very seriously when they are made, investigate, and do their part to ensure that the perpetrators are brought to justice.”

Since 2004, the United Nations has deployed more than 12,000 peacekeeping troops and police to Haiti at an annual cost of more than $800 million.

The incident with the Uruguayan troops was one in what has become a series of alleged abuses by UN peacekeepers in Haiti. In 2007, more than 100 troops from Sri Lanka were sent home after widespread accusations they had recruited young girls for sex.

“They took them out of the country, but as far as we can tell they were never prosecuted,” said Weisbrot.

Under UN rules, peacekeeping troops can only be prosecuted in their home countries. The UN itself has no authority to prosecute them.

“It makes them feel like they can get away with anything,” said Weisbrot.

Over the years, similar allegations have been made against UN troops in other countries and the United States and other countries have been highly critical of the UN’s failure to enforce its stated zero tolerance policy against sexual abuse by its troops.

“This is a problem that has been around and discussed and reported on for too long,” said Ambassador Joseph Torsella, the U.S. Representative to the United Nations for Management and Reform.

In 2005, ABC News revealed widespread sexual misconduct by UN peacekeeping troops in the Democratic Republic of the Congo. Undercover video showed UN officials with prostitutes, and UN troops were accused of trading food for sex with underage girls and boys. In Bosnia, in the late 1990s, UN troops were alleged by local officials to be forcing women into prostitution. Few if any were punished. In Ivory Coast, in 2009, the aid group Save the Children UK alleged UN troops from Benin regularly engaged in sex with children in exchange for food or lodging.

“These incidents are very bad for the UN, there is no doubt about that,” Banbury, the UN assistant secretary general who oversees the peacekeeping and special operations missions around the world, told ABC News.

Banbury is in Haiti this week, his second trip there since the allegations surrounding the Uruguayan soldiers first surfaced.

He conducted a lengthy interview with ABC News about the case last summer, expressing his desire to improve the strained relationship between UN peacekeepers and Haitian citizens. With their distinctive blue helmets and berets, the UN peacekeeping troops are intended to be in Haiti to provide security, and to improve living conditions there — work that is badly needed in a nation that struggles to consistently provide some of the most basic human necessities.

“We are committed to helping people in need of assistance,” Banbury said.

So what would he say to the 18-year-old who is seen being attacked on the grainy cell phone video, Banbury was asked?

“I say that I’m terribly, terribly sorry you were subjected to that absolutely terrible treatment — unacceptable treatment,” he replied. “And the United Nations is committed to ensuring that justice is done in this case.”

But Banbury also acknowledged in the interview that the UN lacks the power to, on its own, punish peacekeepers accused of crimes. And it cannot always count on the troops’ home countries to take action against their own soldiers.

Ansel Herz is a freelance journalist based in Haiti since 2009 who has written for The Nation, Reuters Alertnet, Inter-Press News, Haiti Liberte and other outlets.