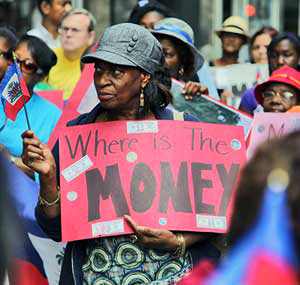 PORT-AU-PRINCE, Haiti (defend.ht) – On Tuesday, the Chairman of the Senate Finance Committee, Jocelerme Privert (Nippes/Inite), said that millions of dollars collected for education through President Michel Martelly’s tax on international calls and money transfers to Haiti were unaccounted for.

Senator Privert said that the National Fund for Education, a program established by President Michel Martelly, that has placed a tax of five (5) cents per minute on international calls and $1.50 [US] fee for money transfers to the country was nonexistent in his eyes and in the eyes of the people of Haiti.

Asked by Valery Numa on radio Tuesday morning, on the availability of funds to be used for school:

“…unfortunately, there is a total opacity surrounding the creation, the collecting, and the use of resources for the National Fund for Education and I will continue to say that this fund doesn’t exist.”

“The president announced the idea of the creation of what he calls the National Fund for Education. There are two public institutions, the Court of Auditors and the Central Bank, which can take administrative measures to collect resources on behalf of this fund.”

“The last update the Senate had on this issue came from Central Bank’s governor who formally stated that, after these measures were effective, with $1.50 collected on each transfer coming from or going abroad, about $2 million has been collected and this amount is locked into an account at Central Bank.”

“About resources collected by CONATEL, (international calls) adds the Senator, till today Parliament hasn’t receive an update, and we will ask some questions of the Minister of Finances, because he has the exclusive responsibility of Public Treasury funds management.”

“Those resources are public resources; they should be deposited in the Public Treasury and managed in conformity with the law on Budget and Public Management.”

“The questions we will ask to the minister are about the legal and constitutional aspect of this fund. This fund is not under any law. No law allowed for the collecting of money for this fund.”

On May 26th, in the presences of representatives of UNESCO, the IMF, Digicel, Voila and the BRH, President Michel Martelly launched the National Fund for Education (FNE) with the intent of having every child in Haiti to attend school for free.