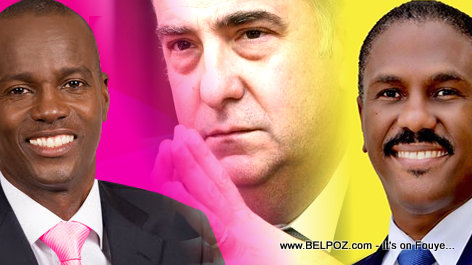 With Haiti’s presidential elections postponed again and just over a week left until the current leader’s term expires, various political factions are negotiating to avert a constitutional crisis that could leave the Western hemisphere’s poorest nation with nobody clearly in charge.

The vote was supposed to occur last Sunday, but election authorities last week postponed it indefinitely due to security concerns, including attacks that had occurred on election offices. It was the third time the vote — a runoff originally scheduled for Dec. 27 — has been delayed. President Michel Martelly must leave office by Feb. 7.

The crisis threatens to throw the poor and troubled Caribbean country back into the instability and political morass that it has long struggled against.

“You’re looking at a country absolutely mired in institutional chaos,” said Eduardo Gamarra, a professor of political science at Florida International University. “They are teetering on the brink. They are there on the edge of the precipice.”

The elections were already troubled, with opposition candidate Jude Celestin planning to boycott. The former government construction ministry director alleged vote rigging in the first round of elections that took place in October.

The ruling party candidate, Jovenel Moise, a banana exporter and political newcomer, won that round but failed to secure the required majority, thereby necessitating the runoff.

Now the countdown has begun to avert a political catastrophe. 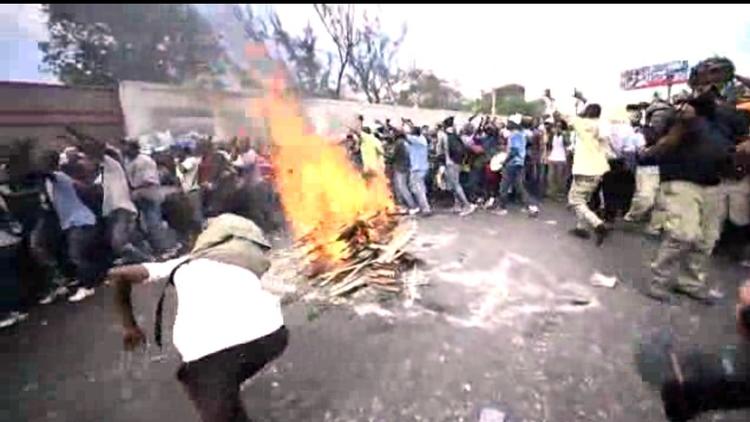 Haiti is once again plunged into political limbo after plans to hold a presidential runoff are abandoned in the face of an opposition boycott and fierce street protests.

The negotiations include Martelly, parliamentary leaders, opposition groups and members of the private sector.

International observers and academics with knowledge of the proceedings said several scenarios are being weighed. Among them is shelving the current elections, ensuring that Martelly leaves office as scheduled, installing an interim government and holding a completely new vote within weeks or months.

“There has been a deeply fraudulent and violent electoral process up until now,” said Brian Concannon, executive director of the Institute for Justice and Democracy in Haiti, a Boston-based human rights group. “There is an opportunity now to step back and create a much better process. If elections are forced through, it will be setting Haiti up for another very difficult five years.”

Jake Johnston, a research associate at the Center for Economic and Policy Research in Washington, D.C., who observed last October’s elections, said a new government would need to consider deeper restructuring, such as an overhaul of the electoral process.

“You have a lot of systemic problems which require not just cosmetic fixes but serious reforms,” he said.

Martelly, a popular former musician who came to power after winning a presidential runoff in 2011, for years failed to hold local and parliamentary elections and has essentially ruled by decree since January 2015.

The country has struggled to establish a steady democracy since the Haitian Revolution of 1986 that toppled President Jean-Claude Duvalier, whose family had ruled the island with an iron fist since 1957.

Longtime polarization among Haitian politicians and a history of intransigence is going to make it difficult to reach a consensus of any kind, analysts said.

Haiti “has a zero-sum political environment, which means if you don’t win, you lose,” Gamarra said. “In a zero-sum environment, losers are never going to accept the outcome. It’s going to be a long, long negotiation because people are not going to cede.”

Tensions have flared for the last several days as unruly protesters have taken to the streets in Haiti’s capital Port-au-Prince, triggering clashes with security forces. 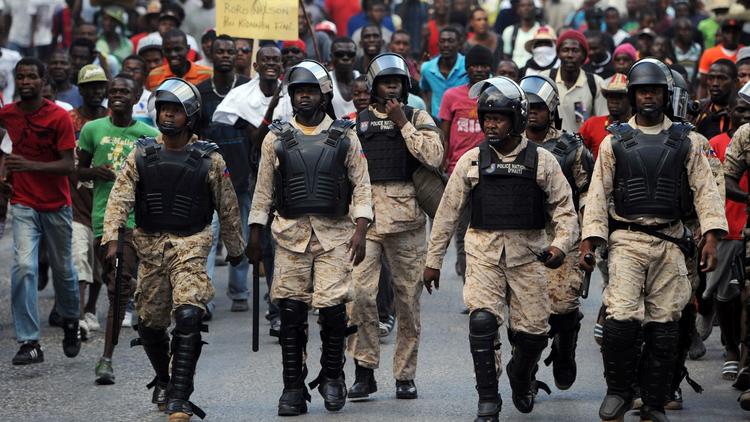 Haitian police patrol the street during a protest in Port-au-Prince on Monday.

The United States, which considers Haiti a “policy priority” and backed Martelly’s presidency, is calling for calm. Washington, which has pumped $33 million into the elections, had been pushing for the final round to take place before the Feb. 7 deadline. But since the postponement last week, U.S. officials have acknowledged that the chance of new elections happening quickly was unlikely.

“Realistically speaking, we may be looking at some sort of temporary solution until there is a handover to a new elected president,” U.S. Haiti Special Coordinator Kenneth Merten told Reuters. “Our fear is that we go into a situation that is open-ended.”

“In our analysis, that is a dangerous place to go,” Merten said.

Since an earthquake in 2010 devastated Haiti, killing hundreds of thousands and rendering just as many homeless, the U.S. has made available nearly $4 billion to the impoverished nation to help with post-disaster relief as well as reconstruction, development programs and longer-term recovery.

But continued progress in rebuilding the fragile island nation will likely be halted unless Haiti emerges smoothly from its political quagmire, analysts said.

Interesting article, however, one must understand certain factors, before a valid analysis can be made.

The recent large – Port-au-Prince based demonstration (not mirrored elsewhere) was not political, in fact. It was an authorization to destroy, pillage and steal. All political philosophies were represented in the 10,000 that swept through the city.

A large pool of Dominican cash went to light the fire. People were paid to participate. There is no such thing as a spontaneous demonstration. The number involved reflects the budget available. Some suggest more than $4,000,000 was invested on this attempt to destabilize Haiti. Each person received a sum equal to many days work – for those who are employed.

My houseboy was there – collecting more than I pay him for a month! And he is a Jovenel Moise supporter, coming from the same district!

Like an army of ants they grabbed everything they could, burned some cars and broke a lot of windows. One person we know had 24 cell phones, at the end of the day.

The real violence was carried out by small teams in white pickup trucks. They spread out through side-streets breaking windows and setting fires.

The media gobbled this up, ignoring a parallel demonstration in Gonaives by school kids. A few thousand marched for Jovenel and Democracy. A rarity. They did this on their own. Perhaps  small flame for Democracy flickers, in which a demonstration can be spontaneous where none existed before.

Jude Celestin was knocked out of the 2010 election because of the fact he had been involved with Aristide/Preval hit-man Amarol Duclona. Duclona is now in a French prison, serving a 25 year sentence, for the murder of French Consul Lauture in Haiti. Lauture had been a part of Andy Apaid’s Group 184 and was killed on Aristide/Preval’s orders during their terror campaign, knows as Operation Baghdad.

Hundreds of people were killed during this state-sponsored terror campaign.

Celestin was also involved with the murder of CNE chief Marcello – carried out by Amarol Duclona. Marcello refused to participate in a Preval/Celestin deal in which $100,000,000 was budgeted for the purchase of new equipment. They planned to buy $50,000,000 in used material and pocket the balance.

Celestin became chief on CNE – the state construction company – and completed the deal, making him a rich man.

He was finally fired for stealing something like $8,000,000 in construction material and opening a building material company for himself.

When authorities moved to arrest Duclona Celestin obtained a false passport and smuggled him to the DR, where he was finally arrested. Before he fled Haiti, Duclona hid in Preval’s sister’s house.

Celestin became Preval’s candidate in the 2010 election and polled at about 4.5% popularity. His first rally, with a huge stage, 5 bands, and a lot of decoration – set up in front of the ruined National Palace, with over 20,000 homeless people within a few hundred yards, drew about 500 people.

The people hate Celestin and wouldn’t walk a few yards to see the show.

He still lacks popularity and fraud saw him gain the number 2 position in the recent election. Knowing he cannot win a free-and-fair-election, against anyone, Celestin has decided to paralyze the Nation.
With the OAS observers, Haiti may have a chance to finish the election, and get on with life.
Celestin will be defeated in a landslide.
Aristide/Lavalas popularity is not there anymore.
With the same motivation – as Celestin – they hope to paralyze the Nation.
There is a danger here. If chaos continues, there is a real chance that the Aristide/Preval team could return us to the murderous chaos of their presidencies.
Jovenel Moise – Neg BANNANN – is a hope for the future. He comes from the peasant class – our vast majority – unrepresented in anything – and could be a real bridge to the future.
Michel Martelly has had a better than average record. He has promised, and tried….. where others have promised and done nothing.
Martelly’s has not been a violent government. He has never had his “Operation Baghdad”  – like Aristide, in which hundreds were killed, kidnapped, terrorized. Investment has started to trickle into the Nation. Until last week, tourism had started to expand.
The Martelly team should hand off to someone who could do something for the Nation.
Jovenel Moise stands head and shoulders above the drug dealing, embezzling, murdering Celestin.
Jovenel doesn’t deal drugs. He hasn’t murdered anyone, and he hasn’t stolen anything.  He has created real and profitable businesses, in partnership with his peasant associates. When they needed a road, others bid $1,200,000 for the 1 kilometer track. Jovenel built it for $400,000 – and better quality.
The business community is frightened by such a man.
They will be forced to give an honest deal – for once.
With Jovenel there is a chance

The alternative is more chaos and disaster, generated by a Transitional Government.

The article mentions Brian Concannon. His views must be filtered since he is Aristide’s man, having done many things for Lavalas in past years.

Let us conclude the electoral process with microscopic supervision by our foreign friends. The original commission, set up to investigate the current vote, stated that there was a lot of “ineptitude” but little “fraud.”  The ineptitude is due to our people’s lack of experience. And, the fraud was largely generated by Celestin and Maryse Narcisse/Aristide.

Haiti must move away from this roadblock and get on with life.  The Nation is basically at peace. The violence was focused where the media would report. Bad news gets column inches. Good news does not exist! 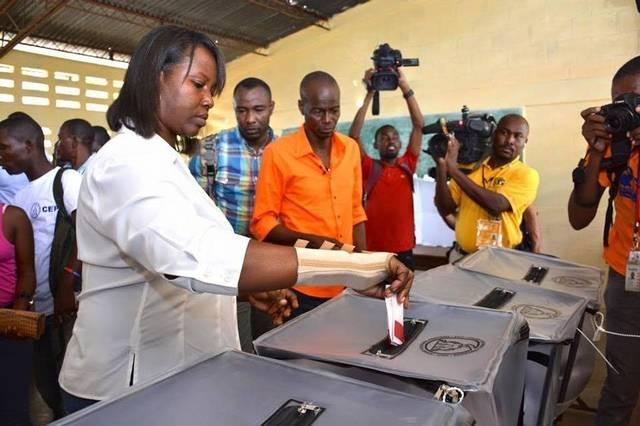