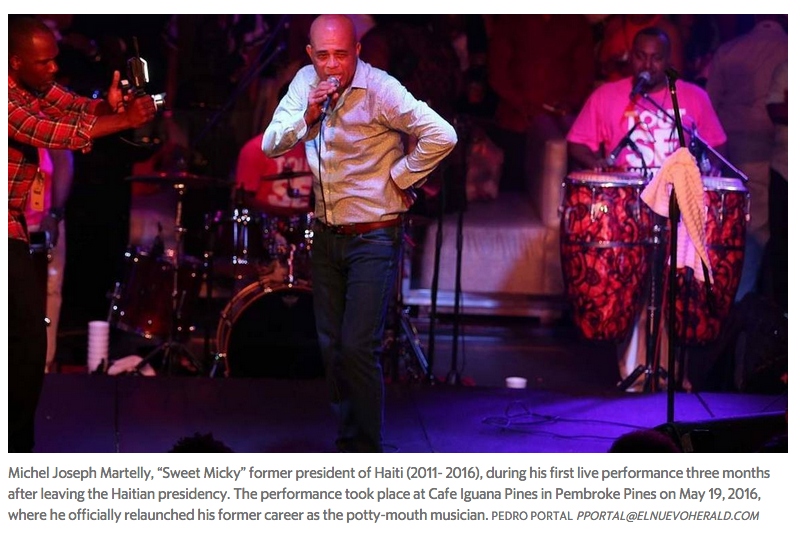 It is where Caribbean culture and celebration intersect with American life.

But this year, there is one carnival performer some Haitian Americans don’t want to see: former Haiti president Michel Martelly, also known as “Sweet Micky,” the name for his anti-establishment, raucous alter-ego stage performer.

In an open letter to Democratic presidential hopeful and New York City Mayor Bill de Blasio, Haitian activists and organizations are asking that Martelly be banned from participating in all activities surrounding this year’s West Indian Day Parade. As New Yorkers, they say, they should not be subjected to the former president’s foul-mouthed incendiary speech and misogynistic performance antics that include attacks on women, political enemies and critics.

“His presence at the West Indian Parade is dangerous for women and goes against the values that make New York City a good place to live,” the signers of the letter, written in English and French, said. “In the era of #MeToo, the participation of Michel Martelly in activities that celebrate diversity in a city that values gender equality and mutual respect appears indecent and incoherent.” 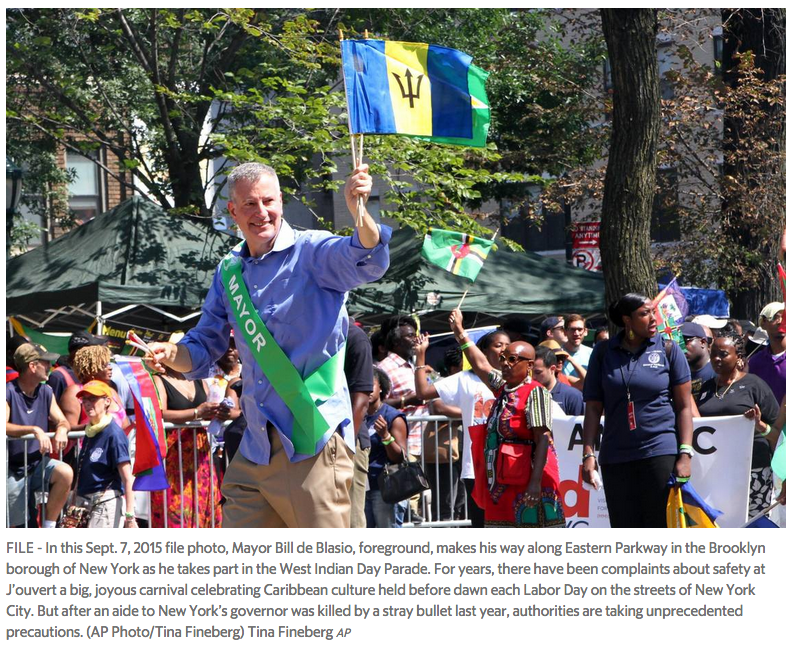 This is not the first time that Martelly, who served as president of Haiti from 2011-16, has faced opposition to his controversial performances.

Last year, two major Haitian cities banned him from their pre-Ash Wednesday Carnival celebrations after women’s groups, religious leaders and human rights activists protested his appearance following an unfiltered, foul-mouthed rant against his critics at a January concert in Port-au-Prince.

Then earlier this year, Haitian Quebecers in Canada, citing misogynistic statements and alleged complicity in the corruption scandal surrounding his presidency,launched a similar protest. They wrote to both Canadian Prime Minister Justin Trudeau and Montreal Mayor Valérie Plante asking that Martelly be blocked from performing in Montreal.

Three days before the scheduled March 22 concert, Martelly released a video on social media saying that his performance had to be canceled due to two of his musicians facing visa problems.

The most recent protest against Martelly’s “Sweet Micky” alter ego comes as Haitians in New York are increasingly flexing their political muscles and winning public offices, and as the ex-president’s own popularity appears to be waning.

Martelly’s concerts and appearances, which once attracted crowds, are receiving a lukewarm reception in some quarters as Haitians everywhere grow increasingly frustrated and exhausted with their country’s dismal reality: no working government, increased gang violence,fuel shortages, soaring food prices, 18 percent inflation and a rapidly deteriorating domestic currency, to name a few.

At the center of the blame in the growing socio-economic and political crisis is Martelly’s hand-picked successor, President Jovenel Moïse. An inexperienced politician who had never held public office, Moïse survived an impeachment vote on Thursday by the Lower Chamber of Deputies, 53-3 against.

But the victory could well be short-lived, as political allies in the upper Chamber of the Senate line up to sink his latest choice for prime minister — the fourth in three years — amid continued calls for his resignation. Anti-corruption activists and political opponents accuse Moïse of not governing and have cited a government audit implicating him in the Venezuelan aid corruption scandal surrounding Martelly’s administration.

Though Martelly holds no official post in Moïse’s administration, some politicians and foreign diplomats say he still wields considerable power and influence, like deciding who should occupy what ministries in future governments. There is also belief that he is mounting his own presidential bid.

Martelly, who performed on Wednesday in Trinidad at the Caribbean Festival of Arts, CARIFESTA, could not be reached for comment. But on stage and in interviews, he’s told critics to keep their hands off “Sweet Micky.” He’s always sought to separate his controversial, gyrating stage persona from the politician, dismissing his antics as being done in good humor.

But Garry Pierre-Pierre, founder and former publisher of the Haitian Times, said that while some Haitians may still buy that argument, it’s becoming increasingly difficult to make that distinction given Sweet Micky’s lascivious public rants against enemies and recent music like his Carnival méringue “Ba’ l Bannann Nan” (Give her the Banana) deriding renown Haiti journalist Liliane Pierre-Paul.

In the open letter to de Blasio copied to other New York politicians, the song’s lyrics are described this way: “This carnivalesque merengue presented the President as a doctor who called his audience to insert various objects in the private parts of Liliane Pierre-Paul.”

A critic of Martelly during his presidency,Pierre-Paulis a 1990 recipient of the International Women’s Media Foundation’s Courage Award in Journalism who is credited with helping champion press freedom in Haiti. During the Duvalier dictatorship, she was arrested, tortured and forced into exile.

Attacking Pierre-Paul isn’t his only fault, the letter says. During Martelly’s appearance at the West Indian Day Parade last year he lashed out at a reveler who inquired about the squandering of billions of dollars in the Venezuelan aid corruption scandal overshadowing his administration and PHTK political party. He told the reveler that he had hid the money in the private parts of the reveler’s wife.

“It’s getting to the point where people are tired,” said Pierre-Pierre, citing other examples of Sweet Micky’s vulgarity. “It’s unbecoming of an ex-president. You would think that would command a certain level of responsibility and respect. But for him it’s the opposite.”

In a letter signed by the president of the West Indian American Day Carnival Association, and shared with the Miami Herald, association president Jean Joseph confirmed that registration had closed for participants. There are only four Haitian groups that are registered: T-Vice, Tony Mix, Kreyòl La and Banboche, a costumed band.

Edens Desbas, one of the signers of the Open letter to de Blasio, said they needed stronger guarantees about the parade, which celebrates 52 years this year. Citing Martelly’s penchant for jumping on stage to join the party even when not on the billing, Desbas said they want de Blasio to “give an executive order to the police to prevent him from going on any of the floats.”

So far, no word from de Blasio, who himself has paraded down the parkway, albeit not in costume. His office did not respond for comment.

A handful of malcontents may make small noise but won’t be able to stop Michel Martelly’s performance. Like it, or not, Michel is still very popular and anti-demonstrators simply look foolish.