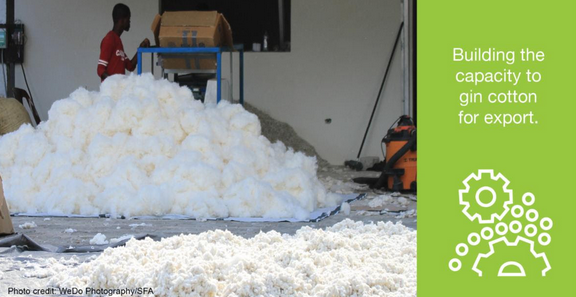 Although it all started with trees, the story jumps forward to rumors which began circulating on July 18th that something important was happening behind an iron gate in the Haitian city of Gonaives. Neighbors spoke of large bags, said to be filled with cotton, being unloaded next to a machine that several other people had seen delivered the day before. A few days later word went out that the machine behind the gate was ginning cotton. Not willing to rely on rumors, people began to peek through the gate and indeed, there it was. For the first time in over 30 years, Haitian-grown cotton was being ginned.

Long thought to be impossible, not only was cotton being grown again commercially in the Gonaives area, but the real proof of its return was that it was being ginned to remove the seeds from the cotton lint. Rumor had become reality in the courtyard behind the gate as a pristine white cloud of cotton piled up in front of a blue-painted ginning machine.
Shortly after that, the source of the rumor became mobile. The ginned cotton was compressed into bales and wrapped in clear plastic. Those bales were piled high on the back of a truck and transported to Port-au-Prince to be exported. At various points along the road curious people approached the truck. Some had not heard of cotton’s return and reached out to touch the bales in amazement. Others had heard the rumors and were thrilled to see it for themselves. They too touched the bales.
It was as if this first batch of cotton was a kind of talisman, and touching the bales a way to connect with the future promise of agricultural prosperity at a time of great uncertainty about the future of Haiti.
The starting point in Gonaives is important because the city was once the hub of Haiti’s thriving cotton economy. Less than a mile from the aforementioned cloud of cotton is the site of what had been the country’s largest gin. The building itself has long been repurposed, and in the early 1990s the gin equipment was eventually sold and shipped to a company in South Carolina. In the space of a few years cotton had gone from the fourth largest agricultural export to zero. And the lucrative domestic market for cotton used in the manufacturing of clothes, pillows and mattresses had also gone to zero.
Cotton’s return began with trees. Specifically more than five million trees planted in five years by members of the Smallholder Farmers Alliance(SFA) through sponsorship from global outdoor lifestyle brand Timberland. Some years later Timberland wanted to explore how it could become a client, and this led to the SFA planting the first commercial cotton crop last summer, and which was harvested in January of this year. Last month 530 SFA smallholder farmers planted the second crop, which will yield close to a million pounds of raw cotton when harvested in January, 2020.
The tree connection continues. Each smallholder growing cotton earns credits by planting trees. These credits, also known as tree currency, earn farmers cotton and other seeds, tools and agricultural training.
Downloading “Haiti’s New Cotton Economy” will give you more details on the SFA’s overall cotton initiative (and some great photos), including plans for a new large-scale gin, the role of a new data management project, and information about a partnership with 2nd Story Goodsto work with artisans in hand-spinning and producing cotton clothing and other products.
We are also pleased to announce a new SFA partner, the Raising Haiti Foundation. Together we are empowering rural communities through a program that will soon include cotton.
Regards,