By Jacqueline Charles And Brenda Medina

U.S. District Judge Edward Chen on Wednesday granted a preliminary injunction stopping the administration and the U.S. Department of Homeland Security from terminating Temporary Protected Status, or TPS, for immigrants from Haiti, Nicaragua, El Salvador and Sudan. The ruling affects over 300,000 people who, under the TPS program, have been allowed to live and work legally in the U.S. for decades after war or major natural disasters in their own countries.

“I’m happy to hear that there is still a possibility that the TPS could be extended. It gives us TPS holders hope,” Elva Castillo, 71, who immigrated from Nicaragua to Miami 21 years ago, said Thursday. “But it is important that we keep up the fight.”

Chen granted the injunction as part of a California lawsuit filed by lawyers on behalf of TPS recipients from the four countries who have U.S.-born children. Lawyers with the American Civil Liberties Union of Southern California, National Day Laborer Organizing Network (NDLON) and a private law firm sought the temporary injunction, arguing that the administration’s decision to end the program was motivated by racism and would adversely affect the immigrant families. 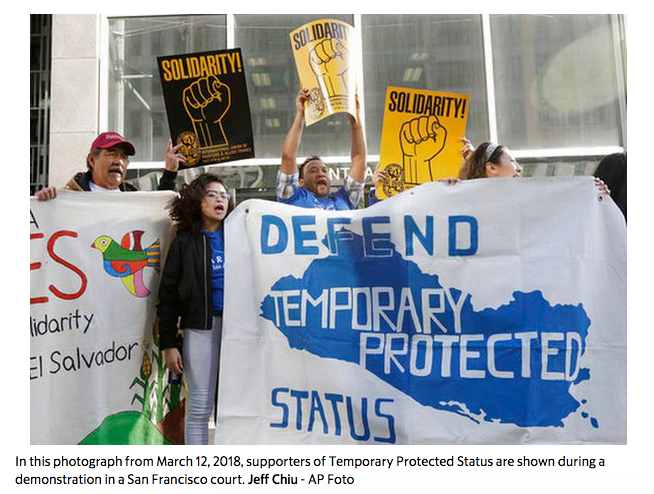 “This is an extraordinary decision. It is the first time in the history of the TPS statute, a statute from 1990, that there has been a court-ordered halt for any TPS termination,” MacLean said Thursday, during a conference call held by the National TPS Alliance. “It is hugely important in terms of what is says about the Trump administration’s decision-making policies in the arena of immigration.”

She warned, however, that the decision is “preliminary and something we will need to continue to defend in the courts, in the streets and in Washington.”

As part of their arguments, MacLean and others cited the potential separation of families as well as President DonaldTrump’s alleged reference in Januaryto Haiti, El Salvador and some African nations as “s—hole countries.”

In the ruling, the judge said that “TPS beneficiaries and their children indisputably will suffer irreparable harm and great hardship.”

The ruling extends only for the duration of the California lawsuit. The next hearing in the case is scheduled for Oct. 26. The government has said it will appeal the ruling. The Associated Press reported that Justice Department spokesman Devin O’Malley said the ruling “usurps the role of the executive branch.”

“The Justice Department completely rejects the notion that the White House or the Department of Homeland Security did anything improper. We will continue to fight for the integrity of our immigration laws and our national security,” O’Malley’s statement said, according to the AP report.

The judge had previously turned down a U.S. Justice Department request for dismissal of the lawsuit. He wrote in his ruling that the government ”has failed to establish any real harm were the status quo (which has been in existence for as long as two decades) is maintained during the pendency of this litigation.”

Chen also said that evidence shows that the decision by acting Department of Homeland Security Secretary Elaine Duke to change the criteria applied by prior administrations in deciding whether to continue or end TPS “may have been done in order to implement and justify a pre-ordained result desired by the White House.”

Congresswoman Frederica Wilson, D-Miami, whose district includes a large concentration of Haitian-Americans, said she wasn’t surprised that the judge found “direct evidence of animus” in the Trump administration’s decision to end TPS.

“From the start of his administration, President Trump has made it more than clear, with his Muslim ban and more recently the inhumane treatment of migrant children, that people with brown skin are unwelcome here,” Wilson said. “It is incumbent upon us to do everything in our power to undo these racist acts.”

Having toured Haiti and viewed the extreme devastation there, including damage from a hurricane, an earthquake and an outbreak of cholera introduced by United Nations peacekeepers, Wilson said “there is a definite need to continue TPS for Haitian nationals.”

The suit is one of five that have been filed in federal courts around the United States seeking to rescind the decision, alleging that it was motivated by racism. The administration announced the end of TPS for Nicaragua and Haiti within weeks of each other in November 2017.

“The hundreds of thousands of workers with TPS who build our cities and keep them running deserve the security of knowing the lives they’ve built in the U.S. are safe,” Working Families United, a coalition of six unions representing workers and immigrant justice said in a statement after the ruling. “This shows that Trump’s move to terminate TPS was based in his racial motivations and not in any law or consideration of safety. “

The coalition continued to call on Congress to provide a permanent solution on immigration.

Castillo, the TPS recipient living in Miami, worries that “some people might get confused and think this is a final decision and everything is resolved. It is not and we need to continue seeking other options to stay in the country.”

She has two U.S.-born grandchildren and has worked as a caregiver, cleaning homes and installing floors.

“They think something is just magically going to happen that allows them to stay,” she said.

Chen’s decision does not include nationals from Nepal or Honduras, which also are beneficiaries of the program.

Lawyers in a separate suit filed in Boston on behalf of Honduran, Salvadoran and Haitian TPSrecipients applauded Chen.

Earlier this summer, another federal judge blocked efforts by the government to throw out the suit.

In Miami, Marleine Bastien, whose Family Action Network is a plaintiff in a suit filed in the Eastern District of New Yorkon behalf of several South Florida Haitians enrolled in TPS, called the decision “sensible.” She said the news will bring hope to those in the program. TPS for Haiti is scheduled to end on July 22.

“I commend Judge Chen for his courage and thank him for the sigh of relief he brought to hundreds of thousands of families, including their American-born children, from the specter of family separation that loomed over them,” Bastien said. “Make no mistake, the Trump administration’s decision to terminate TPS was based on racism and xenophobia.

“Our hope is that this decision will hold to allow us to continue our efforts toward a permanent solution for those 300,000 deserving families,” she said.

Miami immigration attorney Ira Kurzban, who is among the lawyers representing FANM and others, said he hopes the California ruling will have “a positive impact on our case, as it raises similar but not identical issues.”

The group most immediately impacted are Sudanese, whose protection was set to end Nov. 2, followed by Nicaraguans, who were set to lose TPS in January.