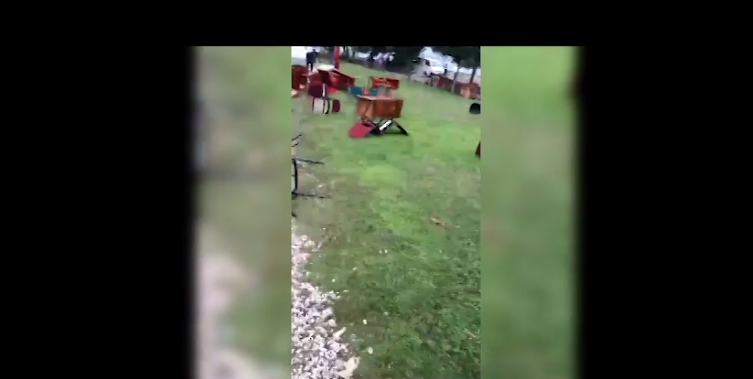 Haiti’s third attempt to ratify a new government and prime minister ended in chaos Thursday, when a vote in the country’s Senate was interrupted as four opposition senators ransacked the chamber — dragging chairs, desks and other furniture onto the lawn — and police fired tear gas at protesters.

The act was captured on video in front of Parliament security and Haiti National Police officers, who had been called to beef up security for Thursday’s vote. The vandalism was immediately condemned by the United Nations, U.S., Canada and others in the international community.

“These deplorable events go against democratic principles,” Canada’s ambassador in Haiti Andre Frenette tweeted. “Canada is calling for a national dialogue aiming at solutions to the security, economic and social crisis that is affecting the Haitian population.”

Haiti has been without a working government for more than two months, costing the impoverished nation more than $120 million in aid from international financial institutions aimed at helping the country prepare for the upcoming hurricane season and shore up a rapidly deteriorating economy.

Hearing about the opposition senators’ actions, some of their militant supporters from the nearby slums converged outside the Haitian Parliament’s gates and tried to get inside. They were stopped by police and Parliament security. A clash ensued with police, who responded by firing tear gas. 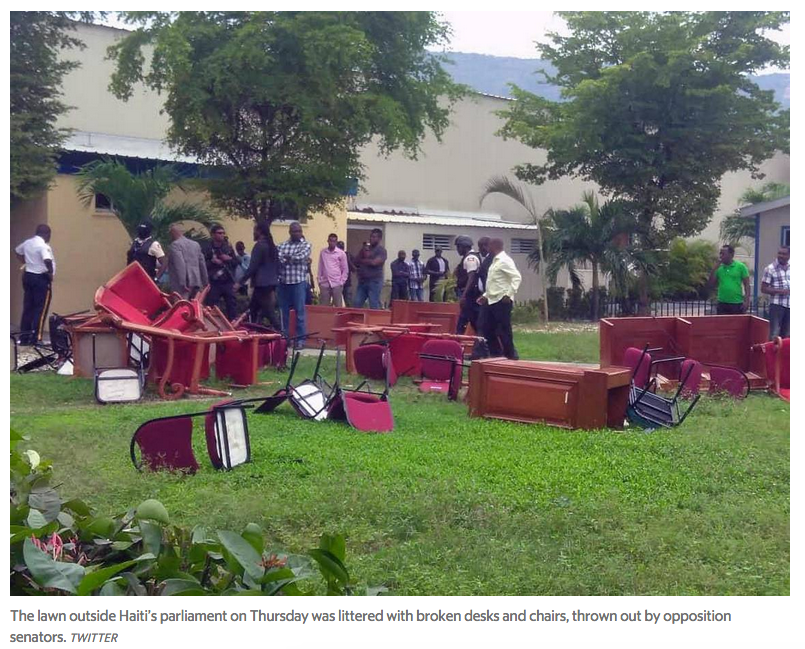 The violence extended to Grand Rue, a central street of Port-au-Prince, where flaming barricades were erected, and a truck from the government’s Centre National des Equipements construction agency was set on fire.

“What happened today pretty much opens the door for the gourde to deteriorate even further since we don’t know when we will get a government,” said economist Kesner Pharel in reference to Haiti’s national currency.

In March, the International Monetary Fund approved a zero-interest $229 million loan to Haiti. But the money — and an immediate $49 million disbursement — was contingent on the country’s having a government and a budget approved by both chambers of Parliament. The European Union, Inter-American Development Bank and World Bank had planned to provide about $75 million in budget support.

All of that is now up in the air.

On Thursday, Haiti’s Central Bank, fearing that the economy could deteriorate further, announced that it was pumping $150 million into the economy to stabilize the depreciation of the gourde. Haiti currently has a 17.7 percent inflation rate, and Haitians are spending more than 50 percent of their income on food. Meanwhile food prices have gone up by more than 20 percent in the past year.

“What the Central Bank has done may quiet the local exchange rate market for a couple of weeks. But if the deep political crisis isn’t solved, we will have the same pressures,” Pharel said.

The four senators involved were Antonio Cheramy, Évalière Beauplan, Rica Pierre, and Nènel Cassy. Cassy said they took the route they did because Senate President Carl Murat Cantave “has refused to listen to the voice of reason.“

“When he decided to side with the executive to violate the constitution, we told him that we disagreed to have former ministers that were part of the [previous] government return in the new government, which the constitution does not allow,” Cassy said.

Since the formation of Lapin’s cabinet, the senators have objected on technical and constitutional grounds to the process, accusing President Jovenel Moïse of not respecting the constitution and trying to illegally appoint ministers who lack the necessary financial clearance to serve.

On Thursday, they also claimed that the current cabinet — which was reconfigured after the second ratification hearing ended in a near fistfight — did not meet the 30 percent rule for female representation in the government.

The key point of contention has been the reappointment of Justice Minister Jean Roody Aly, one of eight ministers from the fired government to be reappointed. Earlier this year, Aly authorized the transfer of five armed Americans,including a former Navy SEAL, who had been arrested by Haiti National Police, to U.S. custody, where they were then flown out of Haiti and faced no charges in the U.S.

Sen. Ronald Lareche, a pro-government lawmaker, said he believes the key to breaking the impasse is to get rid of Aly. Dialogue is needed, Lareche said, while condemning the move by the four senators.

“Some of them decided to resort to violence, removing all of the furnishings inside the Senate, and that’s not acceptable,” Lareche said, describing the battle as one of “galactic proportions.”

But the senators also had support among some of their colleagues.

“I am for all the means necessary to force a respect of the Haitian Constitution,” said Sen. Jean Renel Senatus, a former government prosecutor.

Senatus said he doesn’t condone the burning of vehicles. However, he dismissed the broken chairs as “no big deal” and said he supports the four opposition senators.

“President Jovenel needs to know that the country isn’t a savannah,” Senatus said. “There are laws, there is a constitution. He was sworn in under the constitution. He has a duty to respect it.”