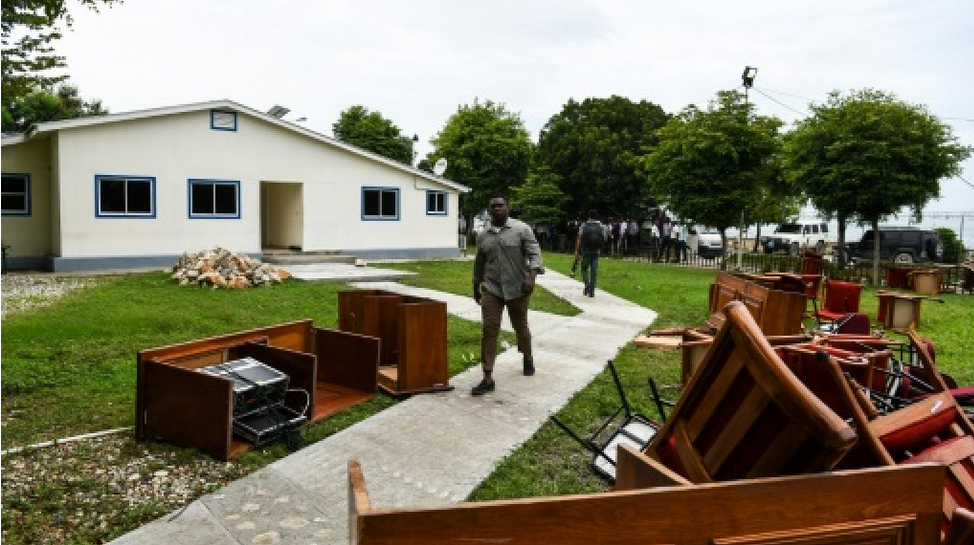 The lawmakers’ four large red velvet-tufted chairs were strewn across the parliament’s yard, partially broken, along with pieces of sound system equipment. Light but persistent rain further contributed to the damage.

Only a handful of parliament staff members were present. They took photographs of the damage, including selfies in front of the heavy desks tipped over in the meeting room.

Sitting calmly just outside the room and the pile of furniture, opposition senators justified their move.

“So many people are killed in the streets and you’re saying a broken chair is what hurts them? How many police officers are killed?” asked Senator Antonio Cheramy, referring to growing insecurity in the country.

Since the start of the year, more than 100 civilians and 20 police officers have been killed — in gun violence or knife attacks — according to a count kept by human rights groups worried about growing areas under armed gangs’ control.

Lawmakers opposed to President Jovenel Moise are angry that eight ministers from the old administration are keeping their posts without certification that they managed public funds well.

Senator Ricard Pierre, who has claimed responsibility for the vandalism, said “the crisis will not be resolved by violating the constitution, by putting in place renegade ministers.”

On two occasions earlier this month, the opposition lawmakers had prevented the government from presenting the prime minister’s agenda by walking around the meeting room while shouting into megaphones.

On Thursday, dozens of protesters took to the streets in solidarity with the opposition lawmakers.

Clashes broke out with security forces, who used tear gas to disperse the crowds. They also shot into the air several times using live ammunition.

Moise tapped Lapin as the new prime minister in early April, just weeks after the Chamber of Deputies censured his predecessor’s six-month-old government in the wake of deadly protests.

The political dysfunction has slowed foreign investment and international aid programs even as 60 percent of the population lives under the poverty threshold.

Establishing a new government is a prerequisite of the International Monetary Fund in order to begin paying out the first portion of aid under a $229 million plan granted to Haiti in early March for the three upcoming years.