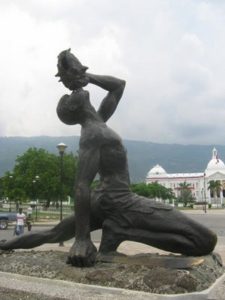 In a letter sent to US secretary of state Hillary Clinton the week of Oct. 4, a group of 45 US Congress members called on the US government not to support presidential and legislative elections in Haiti on Nov. 28 if the Provisional Electoral Council (CEP) continues its exclusion of 14 political parties from the ballot. The letter focused on the exclusion of the Lavalas Family (FL) party of former president Jean Bertrand Aristide (1991-1996 and 2001-2004); the letter’s author was Rep. Maxine Waters (D-CA), who is said to be close to Aristide and to FL. The elections will cost some $29 million and will largely be financed by the international community, including the US. (Radio Kiskeya, Haiti, Oct. 8; New York Times, Oct. 9 from Reuters)

The situation seemed less clear back in Haiti. FL coordinator Maryse Narcisse indicated in mid-September that she supported calls to boycott the elections, but a number of politicians associated with FL or Aristide have decided to run with other parties. Three of them are officially approved presidential candidates: former prime minister Yvon Neptune; Yves Christalin, one of FL’s founders; and Aristide’s former lawyer, Jean Henry Céant.

On Oct. 7 Sonny Aurélien (or Sony Orélien), general secretary of the Cell for Reflection of the FL Grassroots Base Organizations, spoke at a press conference announcing his group’s support for Christalin, who he said would bring Aristide back from his exile in South Africa. According to a local radio station, Radio Kiskeya, the press conference was held at the home of folksinger and longtime FL activist Annette Auguste (“Sò Ann,” “Sister Ann”), although she was not present. Like Rep. Waters, Sò Ann is considered close to Aristide. On Oct. 8 Ansyto Félix of the FL Mobilization Commission denied that the FL was supporting Christalin.

But Yvon Neptune, who was Aristide’s last prime minister (2002-2004) and was imprisoned for two years after Aristide’s ouster on Feb. 29, 2004, is clearly not seeking support from FL or Aristide. During an Oct. 6 interview on Radio Kiskeya, he said that Aristide had resigned in proper form in 2004. “I had a copy of Mr. Aristide’s resignation letter,” he said. “It was authentic.” Aristide and his supporters have always insisted that he was the victim of a “modern kidnapping” by the US and possibly other countries. Neptune also said that the bands of criminal Aristide supporters, widely known as chimère, had been integrated into the police force in the last days of Aristide’s administration. (Radio Kiskeya, Oct. 6)

President René Préval has also been having problems with a former prime minister, Jacques-Edouard Alexis, who is now running for president for the Mobilization for Haiti’s Progress (MPH) after being passed over for the nomination of Préval’s Unity party in favor of Jude Célestin. On Oct. 5 Alexis charged that Préval had distributed firearms to his supporters to ensure Unity’s victory in the elections. (Radio Métropole, Haiti, Oct. 5)

Jean-Henry Ceant seems to have widespread support from both Lavalas, and non-Lavalas sectors. He is seen by many as the best solution to Haiti’s overwhelming problems. Recent polls support this analysis with Ceant’s popularity hovering around 49 percent while President Preval’s chosen candidate Jude Celectin sits below 5 percent as do Neptune, Chrystalin and Jacques Alexix.