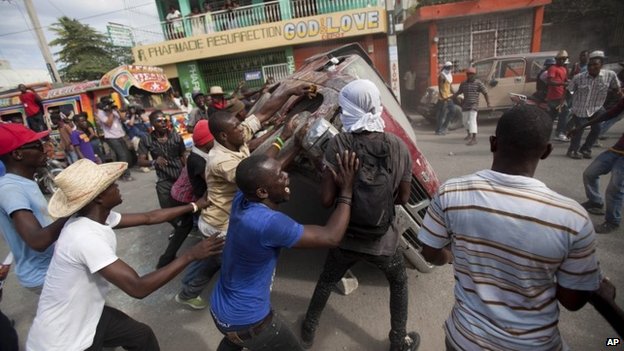 Protestors have been demanding President Martelly’s resignation over the delay

Haiti has set dates for elections which have been repeatedly delayed, causing months of protest.

Elections for two-thirds of the senate and the chamber of deputies will be on 9 August, with the presidential and municipal vote following on 25 October, Haiti’s electoral council said.

President Michel Martelly is barred from running again by the constitution.

The opposition has accused him of abusing his powers in order to rule by presidential decree.

Parliament was dissolved in January over its failure to hold elections, leaving Haiti without a functioning government.

Mid-term Senate elections had been due in May 2012, while the municipal poll is three years behind schedule.

The delay was caused by a stand-off between the president and some opposition senators over an electoral law which would make the vote possible.

Street protests calling for Mr Martelly’s resignation over the delayed vote have intensified with demonstrators angry by high petrol prices.

Haiti is one of the poorest countries in the world, and is still struggling with the legacy of the devastating 2010 earthquake.