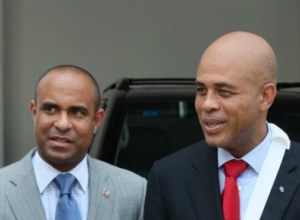 Nearly three months after being put in charge of Haiti’s government, Prime Minister Laurent Lamothe is making changes to his cabinet. The government shake-up was announced in an e-mail late Monday by the Prime Minister’s Office.

There was no explanation provided in the announcement, only the names of the new ministers. Among the changes: Lamothe will no longer serve as foreign minister. That role has been handed over to Pierre Richard Casimir. But Lamothe will add the ministry of planning and external cooperation to his portfolio.

Another big change is in the interior ministry. Thierry Mayard-Paul, a close powerful confidant of President Michel Martelly who served as his chief of staff, is being replaced by former Minister of Social Affairs Ronsard Saint-Cyr. It is unclear what role Mayard-Paul will play in the country’s governance.