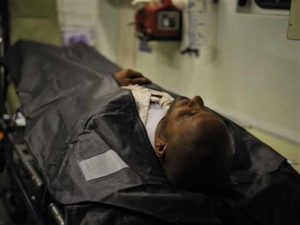 Les Cayes – One of 13 Haitian police officers being tried in the killings of inmates during a prison riot in the chaotic aftermath of the 2010 earthquake testified that he doesn’t know who caused the deaths.

The assertion by Sylvestre Larack, who oversaw the prison, seemed to stun many in the crowded courtroom.

“You were responsible for the prison that day, and you don’t know anything?” Judge Ezekiel Vaval asked the defendant. “How can that be? How did they die?”

“I don’t know exactly who has the responsibility for the deaths,” Larack said.

Larack and 12 other officers are charged with murder, attempted murder and other crimes for allegedly opening fire during a prison uprising one week after the earthquake.

It is not clear how many inmates were slain during the unrest on January 19 2010, but UN police reported seeing 10 dead prisoners. Investigators believe other bodies may have removed. Dozens of inmates were wounded.

Now in its sixth week, the trial has captivated the coastal town of Les Cayes. Dozens of people with no connection to the defendants or lawyers jam into the courtroom just to watch what is an unusual proceeding for Haiti.

The country’s justice system is widely considered corrupt and dysfunctional, and few cases make their way to trial. About three-quarters of the 5 000 people imprisoned in Haiti have never even been charged with a crime.

The more than 20 defence lawyers have argued that the real architects of the prison riot aren’t present to testify. One attorney, Jean Renel Senatus, said a prisoner nicknamed “Ti Mousson” started the riot and the leader of the police riot unit, Olritch Beaubrun, have both left Haiti.

“We’ve only heard from people who don’t know anything,” Senatus said. “The commander Beaubrun has escaped, along with the man who started the riot. Among my accused men, I can’t say if there are any who are responsible.”

In statements to a joint UN-Haitian government commission after the bloodshed, both Larack and Beaubrun said that prisoners had attacked each other.

“When you were interviewed before, you said there was a fight between police officers and prisoners,” Salamon said. “Now you say you don’t know anything. Why are you changing your story?”

Larack didn’t have a chance to respond as defence and prosecution lawyers began arguing over whether pre-trial statements could be used in court. The judge said was important to focus on testimony used in the court.

If convicted, the defendants could face life in prison with hard labour.

Twenty-one other people also are being tried in absentia because they have fled. Even if convicted, they would be entitled under Haitian law to a new trial if they returned to face the charges.

He will soon tell the truth.

There are no secrets in Haiti and many already know exactly what happened and he is responsible for this disaster.