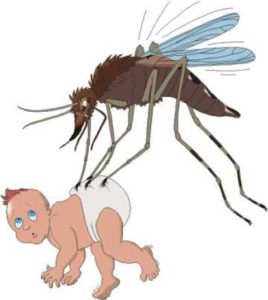 Around the world, malaria, transmitted by mosquitoes, is the most significant parasitic disease of humans and claims the lives of more children worldwide than any other infectious disease.  Most prevalent in sub-Saharan Africa, 98%  of malaria infections, approximately 243 million cases every year,  occur in Africa.  An estimated 863,000 malaria deaths are among children in Africa under five years of age.

There are currently no effective vaccines for any of the six or more species that cause human malaria.

There may be a bright light on the horizon however, as an experimental Novartis AG drug killed malaria in mice with just a single dose catapulting it into the limelight as the first new treatment for one of the world’s major killer diseases in 30 years.

“A single-dose cure would go a long way to addressing the unmet medical need in malaria, and we look forward to seeing how this compound performs in clinical trials,” said Rick Davis, of Britain’s Wellcome Trust, which supported the research

Published Thursday in the journal Science, a team of scientists from around the world  revealed that the drug NITD609 has shown to be effective  when administered in mice against the two most common parasites responsible for malaria, as well as killing  a group of drug-resistant strains taken from patients in Thailand.

Safety testing is needed prior to human usage, but scientists are confident that testing results will return positive and human trials can commence later this year.

“I would be extremely shocked if someone comes back and tells me that we’re not hitting the bug in humans,” said Thierry Diagana, who led the research at the Novartis Institute of Tropical Diseases in Singapore. “When I see the type of potency that we’re getting, I’m very excited and very optimistic,” Diagana said in an interview.

The third deadliest infectious disease following AIDS and tuberculosis is killing African children every 45 seconds according to the World Health Organization (WHO).  Researchers have been searching for new treatments  against malaria since the currently used drugs which were developed in the 1970’s, was proven in a study to be losing effectiveness in Cambodia.

Current treatments for malaria are artemisinin combination therapy (ACT) drugs made by firms like France’s Sanofi-Aventis and are expensive. Resistance to chloroquine and sulfadoxine-pyrimethamine, the cheapest malaria drugs, has become more common.

The New England Journal of Medicine last year showed drugs derived from artemisinin took almost twice as long to clear the parasites that cause malaria in patients in western Cambodia, where drug-resistant strains abound, as in patients in northwestern Thailand.

Identified by the Novartis Institute for Tropical Diseases (NITD) working in an international collaboration supported by the Wellcome Trust, the international Medicines for Malaria Venture (MMV), the U.S. National Institutes of Health (NIH) and several other bodies, the experimental drug NITD609 belongs to a new class of drugs called spiroindolenes.

Using an ultra-high throughput robotic screening technique, scientists screened 12,000 chemicals before they singled out NITD609 as a potential drug candidate.  NITD609 also has properties which could enable it to be manufactured in pill form and in large quantities.

Anthony Fauci, director of the NIH’s National Institute of Allergy and Infectious Diseases, said the experimental compound had several “desirable features,” including that it targets a parasite protein not attacked by any existing malaria drugs.

Elizabeth Winzeler, also with the NIH, who worked on the team said, “From the beginning, NITD609 stood out because it looked different, in terms of its structure and chemistry, from all other currently used antimalarials.  If NITD609 behaves similarly in people to the way it works in mice, it may be possible to develop it into a drug that could be taken just once — far easier than current standard treatments in which malaria drugs are taken between one and four times a day for up to seven days.”

As to whether or not NITD609 can replace artemisinin, Timothy Wells, Chief Scientific Officer, Geneva-based Medicines for Malaria Ventura commented,  “Unfortunately, as in most drug development, the answer is ‘wait and see.  The speed at which NITD609 has moved from a hit to a preclinical drug candidate, however, suggests that we may not have to wait too long.”

Proclaiming the study to be “very exciting”, Nick White, Professor of Tropical Medicine, Mahidol Oxford Tropical Medicine Research Unit, Bangkok said,  “These could be a promising new class of antimalarials.”

Expecting positive results by 2011, British drugmaker GlaxoSmithKline is performing late-stage testing in people of an experimental vaccine against malaria, which, if it proves effective will seek regulatory approval by 2012 for the vaccine called Mosquirix.