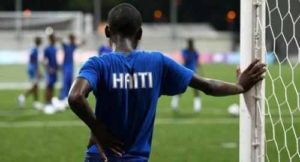 A close game at halftime was blown open after the break, as four goals helped Haiti International beat Caracas F.C. 6-1.

BY SANTOS A. PEREZ

Haiti International remains in contention for the Copa Latina title after a 6-1 rout of Caracas F.C. in a quarterfinal match Saturday night at Ted Hendricks Stadium.

Dumel Decius and Ary Jaccys each scored twice to lead Haiti to its first semifinal appearance. Haiti turned a close match at halftime into a lopsided win with four second-half goals.

“It has been eight long years for us,” Haiti coach Joe Black said. “We’ve tried year after year and we couldn’t succeed. This year I think we have the team to go all the way.”

Decius scored his second goal with a minute remaining in the first half to give Haiti a 2-1 lead. Bitielo Jean-Jacques’ pass from the left wing found an open Decius near the far post. Decius converted a shot that landed inside the right post.

“I had to move to the forward position because of injuries today, so the guys counted on me,” said Decius, who usually plays midfield. “When [Caracas] tied the game, I had to keep the team’s confidence up. That second goal meant so much to us.”

“Games in this tournament have so many turns, so I just made sure that everybody stayed calm,” Decius said. “We’re capable of doing what we did in the second half. We just remained focused and played together as a team.”

Jaccys scored his first goal in the 52nd minute. Evans Prophete’s deep pass from the right wing found Jaccys near the far post. Jaccys beat Caracas goalkeeper Fernando Amondarain to the ball and tapped in a shot from six yards.

Samuel Altejacques’ header off Prophete’s corner kick made it 4-1 in the 61st minute. Jaccys scored his second goal with an uncontested shot from 20 yards seven minutes later.

Haiti took a 1-0 lead on Decius’ first goal in the seventh minute. Decius dribbled 15 yards and blasted a shot that eluded Amondarain.

“All the guys are so motivated to win,” Black said. “Throughout the week, we keep communicating. We stay in touch. It’s been a great journey so far.”