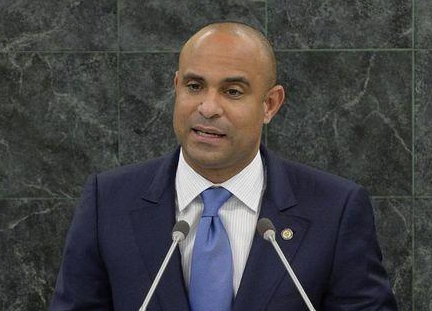 Laurent Salvador Lamothe, Prime Minister of Haiti, speaks during the 68th Session of the United Nations …

PORT-AU-PRINCE (Reuters) – Haiti’s presidential campaign is barely under way and election officials are already under fire for barring the candidacy of former prime minister Laurent Lamothe, who hoped to succeed his former boss, President Michel Martelly.

Lawyers for the Provisional Electoral Council (CEP) on Wednesday ruled Lamothe lacked the required “discharge,” a routine investigation of government ministers into their use of public funds.

“The CEP’s decision confirms the arbitrary nature of the electoral process in Haiti, a real threat to democracy,” Lamothe wrote on Twitter Wednesday morning.

Lamothe’s campaign accused Martelly of trying to manipulate election officials to prevent him from running. The campaign says its internal polling shows Lamothe is the clear front runner.

“There is a clear political motivation of what is supposed to be an independent court – and it is being manipulated by those who do not want to see Lamothe as a candidate,” said an adviser to the Lamothe campaign.

Lamothe and Martelly have been at odds since the arrest of an accused drug trafficker and kidnapper, Woodly Ethéart, who has close ties to Martelly’s relatives.

Candidates have three days to appeal the rulings.

The first round of the presidential election is Oct 25. If no candidate wins outright there will be a runoff December 27.

Of 70 candidates who registered to run, 23 were challenged on legal grounds by a board of lawyers for the CEP. The board rejected Lamothe and two others outright.

“There are other candidates who were accepted who also didn’t have the discharge. They are in the exact same position as Lamothe,” said Pierre Espérance, the executive director of the National Human Rights Defense Network.

Among those allowed to proceed were Thierry Mayard-Paul, a former interior minister and adviser to Martelly, Mario Andersol, the former chief of Haitian police, and Duly Brutus, Martelly’s foreign affairs minister.

A discharge is usually conducted by legislators, but Haiti has not had a functioning parliament since Jan. 12, when the terms of the entire Chamber of Deputies and a third of the senators expired.

Without a parliament, many former members of the government are left without a discharge.

Martelly announced Friday he would not grant discharges for anyone by decree.

Elections for a new parliament are to be held August 9 with more than 2,000 candidates.