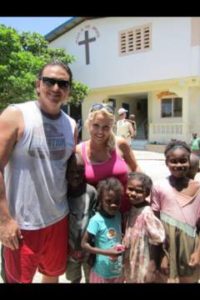 Chris and Kelli Wilson visit orphans in Croix-des-Bouquets, Haiti, in May 2011.

YORKVILLE – When Chris and Kelli Wilson first saw the devastating plight of Haitian orphans after the 2010 earthquake in the island nation, their first impulse was to open their checkbook and make it better.

“We asked our contacts at the Global Orphan Project how much it would cost to build an orphanage in Haiti, and when they told us it would take about $150,000 we offered to write a check then and there. The Lord has blessed us so much that we could do that,” recalled Kelli Wilson, who co-owns a cleaning service with her husband. “But the Global Orphan Project people said that they’d rather we do fund-raising to build an orphanage to raise awareness and get people involved, so that’s what we’ve been doing.”

Though the Wilsons have raised that $150,000 — and more — since founding their charity, An Orphan’s Prayer, in 2011, they have donated all of it to existing orphanages in Haiti, Uganda and Mongolia rather than breaking ground on their own facility.

“We went into this planning to build a village for orphans, with dormitories, a medical clinic, a kitchen and a school. It’s the American way to build things for ourselves,” Kelli Wilson explained. “But after awhile we found God was telling us not to be so prideful, so we decided to support other people’s work and focus on spreading the word at home.”

So far, the Wilsons have inspired many famous and not-so-famous people to participate. Their second annual golf outing, scheduled for July 8, will feature guest appearances by nearly 20 sports celebrities, including former Chicago Bears quarterback Jim McMahon, NFL and NBA star Bo Jackson and PGA golfers Steve Marino and Jeff Overton. They expect the sold-out event to raise as much or more than last year’s golf outing, which netted about $72,000, Kelli Wilson said.

Local businesses and restaurants have also sponsored fund drives or donated food and supplies, especially baby formula, that the Wilsons deliver to orphanages during their frequent mission trips. Oswego 9-year-old Natalie Catey, horror-struck by videos of barefoot Haitian children hurting their feet on rocks and debris, has collected and donated nearly 300 pairs of shoes in the past two years, Kelli Wilson noted.

Recently, the Wilsons have reached out to area 4-H clubs to help orphans worldwide. Local 4-H members have sewn enough curtains to cover all the windows at the 63-resident La Hatte orphanage in Haiti. Four-H officials also are working with the Wilsons to develop lesson plans to teach orphans and their caregivers sustainable farming and goat-raising techniques so they can support themselves.

“Most of these children rely solely on foreign aid to survive,” Kelli Wilson said. “Helping them raise goats so they can have milk and meat will give them more independence.”

The devout evangelical Lutherans are thrilled that Fox Valley residents have responded so enthusiastically to their fund-raising efforts.

“We prayed that God would help us help these orphans, and it is amazing how bountifully our prayers have been answered,” Kelli Wilson asserted.

For more information on the project, visit its website, www.anorphansprayer.org.