Defending president promises supporters a ‘surprise’ as Socialist rival François Hollande says he is certain of nothing. 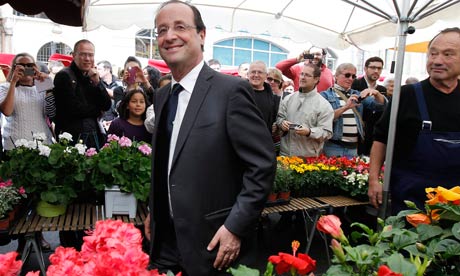 François Hollande campaigning in the market town of Tulle in his central France constituency on Saturday. Photograph: Guillaume Horcajuelo/EPA

Socialist voters face a nervous wait for the results of today’s presidential election runoff between Nicolas Sarkozy and François Hollande after final opinion polls following Wednesday’s fiery television debate revealed a late surge in favour of the outgoing president, who has previously trailed his leftwing rival throughout the race.

The polls indicated that Hollande was still on track to win the second round runoff vote, but revealed that the gap between the presidential rivals had narrowed from 10 percentage points a week ago to just four. An Ifop poll for Paris-Match showed Hollande at 52% and Sarkozy at 48%.

On Friday, before the official midnight deadline for campaigning to end, Hollande warned his supporters not to consider the election as being in the bag. At his last campaign meeting in Périgueux in south-west France, he said the battle was not yet won.

“It’s true that you are confident and you want to win. I feel it,” he told the crowd. “I don’t want to be a killjoy, but don’t make what could be the fatal mistake of thinking that the game is already over … that you needn’t turn out. I have to tell you that I am sure of nothing. This victory is still not certain.”

At his final campaign meeting at the Sables-d’Olonne on France’s Atlantic coast, Sarkozy, who needs to pick up votes from Marine Le Pen’s far-right Front National, which scored nearly 18% in the first round of polling, was still confident that he could snatch victory and promised that Sunday’s result would be a “surprise”.

“Each of you has the future of the country in your hands,” he said. “Nobody’s vote counts more than another. You have no idea how many things are at play on this knife edge.”

If the Socialist candidate is elected the 24th president of the French republic, Hollande and his supporters are expected to party at the Bastille on his return to Paris .

His campaign team has refused to give details of any planned celebrations, for fear of appearing too confident and spooking the electorate. However, the square, former site of the notorious prison overrun and destroyed during the French Revolution, is seen as the most likely venue for a mass gathering because of its powerful association with the left.

As Sarkozy has discovered to his cost, celebrations matter in politics. His decision to savour his 2007 victory at one of the most expensive restaurants, Fouquet’s, on the Champs Elysées – followed by a holiday on the yacht of a billionaire businessman friend – must have seemed like a good idea at the time. But the image came back to haunt him as the global economic crisis struck, and ultimately served to reinforce the impression of a bling lifestyle and a sense that he was acting as a “president of the rich”.

During the election race, it was a marked contrast to Hollande’s approach, as the Socialist artfully positioned himself as Sarkozy’s polar opposite: Monsieur Normal, more Swatch than Rolex and “a man of the people”. It was telling that, like Ms Bruni-Sarkozy, Hollande’s partner, the former journalist Valérie Trierweiler, was often on the campaign trail, but usually some way behind, out of the camera shot.

“If Hollande wins, people will automatically gravitate towards the Bastille without even being told,” said a member of the Socialist party yesterday. “The place is very symbolic and it would be perfectly natural to celebrate victory there … if we win, that is,” he added cautiously.

Sarkozy’s election team is said to be planning a gathering at the equally symbolic Place de la Concorde – where Louis XVI and his wife Marie-Antoinette lost their heads to the guillotine.

Hollande has been circumspect about his choice of prime minister and cabinet posts if he wins, insisting that he has not drawn up a shortlist.

Speculation has centred on his long-time friend and supporter Jean-Marc Ayrault, 62, deputy mayor of Nantes and head of the Socialist party group in the National Assembly, and Martine Aubry, 61, Hollande’s rival for the party’s presidential nomination and head of the party. He has promised to have an equal number of women in his government and to reintroduce a ministry of women’s rights.

On Saturday, as the polling stations opened in France’s overseas territories, starting in the tiny islands of Saint Pierre and Miquelon off the coast of Newfoundland, Hollande was mobbed as he made his usual tour of the market in the town of Tulle, his constituency in the Corrèze in central France.

“I’m sure you’re on the right track,” said an elderly shopper. “I hope so,” Hollande replied. “We’ll see tomorrow.”

Sarkozy was reported to be spending the day with his wife and six-month- old daughter, Giulia.

Thinks Hollande is full of “empty promises” due to unrealistic spending programmes and high taxes.”Hollande says he’ll give everything, but in the end he’ll have nothing to give. His taxes will be too high.”

If Hollande enacts his fiscal plans, Puech says he will have to forget about spending more time in a countryside second residence. “I just won’t have anything extra,” he says. Agrees with Sarkozy’s crackdown on immigration.

Owner of a halal, organic, “traditional” French butcher’s shop, Les Jumeaux (The Twins), with his twin brother, Karim, in the Paris suburb of Les Lilas. Loumi, whose parents were immigrants from Tunisia, works nearly 90 hours a week for €1,200 (£970) a month, and says he is tired of “abuses” of the country’s generous social benefits.

However, he sides with François Hollande because he is offended by Sarkozy’s “inflation of the immigration problem”, along with a perceived threat to halal ritual slaughter practices.

“Normally I lean to the right, but I think Sarkozy is a thug,” he says. He thinks immigration should be tightly controlled because of a lack of jobs, but says it is not “the heart of the country’s problems”.

“He made a lot of good reforms that made him unpopular, such as university system reforms, increasing the legal retirement age, and reducing the number of civil servants,” she says. “I’m a civil servant, but employing too many is counterproductive.”

Thinks that Sarkozy has pandered to the far-right Front National, but adds that anti-Sarkozy sentiment has been exaggerated. As for Hollande – “he’s lame”.

A long-time member of the Socialist party, Godard says: “With Sarkozy, the problem isn’t so much his economic programme, it’s all the rest. He pits people against each other.”

Though unsure that Hollande will be able to change Europe’s German-led austerity trend, Godard prefers giving the Socialist leader’s policies a try, “even if it means I’ll certainly have to pay more taxes”.