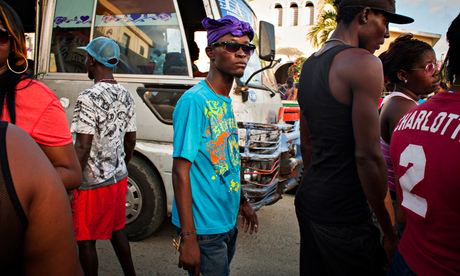 Alejandro Pierre, centre, attends a street procession in Santo Domingo during Holy Week. The aspiring bartender was born in the Dominican Republic, as was his mother; his father was born in Haiti. Photograph: Alessandro Vecchi

Alejandro Pierre is known as the king of bachata in his neighbourhood, on the outskirts of Santo Domingo. He loves the swaying hip movements of this uniquely Dominican dance.

Pierre was born in the Dominican Republic, as was his mother. But his father was born in neighbouring Haiti, and his maternal grandfather emigrated decades ago to work in the sugarcane fields. Until this week, Pierre’s Haitian origins made him ineligible for Dominican citizenship.

A constitutional court ruling eight months ago rendered stateless an estimated 210,000 people like Pierre, according to the UN refugee agency (UNHCR). Governments and human rights organisations have decried the policy and warned that the ruling could have unforeseen economic consequences.

The law addresses an eight-month legal standoff. In September, the constitutional court legalised actions the Dominican authorities had been making for the past 15 years – arbitrarily and then systematically denying citizenship to descendants of Haitian immigrants.

The court ruled that the plaintiff, a woman born in the republic to Haitian parents, was not Dominican. It also ordered a scan of the civil registry to identify anyone else born to irregular migrants since 1929. The court ruling, which cannot be appealed against, sealed years of deprivations of papers and legal amendments to justify the country’s citizenship policies.

The government claimed it was simply addressing longstanding immigration issues and asserting its sovereignty to manage citizenship. “Birthright is not a reason to grant Dominican nationality,” said a staff member at the Central Electoral Board, which manages civil registration. He requested anonymity as he did not have permission to grant interviews.

But researchers have already noted the impact of the ruling. “The deliberate creation of a stateless underclass increases the already formidable risks of exploitation,” said a recent report by the American Federation of Labour and Congress of Industrial Organisations. It warned that the ruling could worsen poverty among those affected, because without an identity card people are relegated to informal jobs and have little bargaining power in relations with employers.

That was one of the main complaints the new law addresses. Advocates are cautiously optimistic and say that the next challenge will be the implementation process.

For the past six years, Pierre has been trying to secure a national ID card so he can work. The card is necessary for myriad bureaucratic tasks, including marriage, registering children, opening a bank account and entering public university.

Each time Pierre has gone to request his ID, he has been told to wait or to bring more documents. Once the staff told him to go to the Haitian embassy to apply for a passport.

Pierre, who has never been to Haiti, found the suggestion absurd, but he tried it anyway. At the Haitian embassy, “the lady told me ‘you can’t get a passport, you’re Dominican'”, he said. When he returned to the registry he was told his papers were not ready, without further explanation.

Now 26, he still has no ID. Because he has a birth certificate, he should be able to get his ID under the new law. Those without a Dominican birth certificate may have to register to enter into the naturalisation process. This is a particularly vulnerable group going forward, as naturalisation is a discretionary process. Pierre has already wasted years waiting.

The fields that once surrounded Pierre’s batey – a town for sugarcane workers – are gone and Bienvenido has morphed into a bustling urban pocket. The younger generation has moved on, along with the Dominican economy; as the sugar industry has shrunk in recent decades, tourism has blossomed.

With his knock-off Dolce and Gabbana belt, gold chain and fake Ray Ban sunglasses Pierre does not look like a rural worker, and he wants to be a bartender. “Since I was a kid, I have always wanted to find out how to make my own drinks,” he said.

Perhaps he has been inspired by the vibrant dance halls he frequents on Bienvenido’s main street, where the scent of fried chicken permeates the air and women in bright spandex saunter by while men lounge at the roadside sipping rum and beer.

After training to become a waiter and bartender, Pierre had a successful trial run in a resort in Cabarete, a tourist hub in the north. But he could not sign a contract without ID. “These are young people who want to study, they want to go to university, they know about technology, they want to get out of the batey and go and work. For those people it’s terrible that they don’t have a document,” said Gonzalo Vargas Llosa, head of the Dominican office of the UNHCR. “Especially the younger generation, it breaks my heart … [they] are losing the future.”

Unemployed and bored, Pierre has passed many listless hours in his neighbourhood. During Holy Week in April he danced and sang his way through a local batey in a traditional carnavalesque street procession called gagá in the Dominican Republic, rara in Haiti. He shouted songs in Haitian Creole – with some of the only words he speaks in the language. Above the musicians playing bass drums and handmade metal trumpets, a Dominican flag waved in the thick tropical breeze.

Pierre sees no conflict between his Dominican and Haitian identities; he switches easily from the culture of gagá to bachata. “I would like to visit Haiti and learn more about the culture because it’s my family,” he said, “but I’m from here.”

Finally, with the law his social integration may be reflected in his documentation.

The problem still exists and this is not a final and complete solution.

There is a lot of prejudice, against Haitians in the DR.