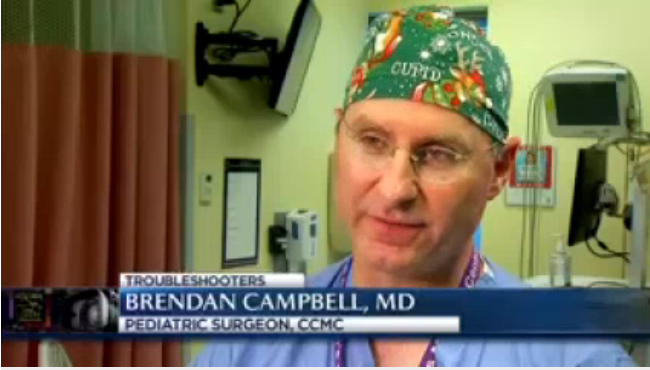 When a group of doctors from Connecticut Children’s Medical Center and similar hospitals nationwide landed at their Haiti mission trip on December 12, they didn’t expect they’d arrive empty-handed.

It was the first snafu of its kind for Doctor Brendan Campbell, who has made the annual trip a Christmas tradition as a way to give back.

“You really feel like you’re fulfilling a need,” said Campbell. “If we don’t go down to do these operations, no one else will.”

And without proper supplies, they couldn’t.

“The real tragedy was we weren’t able to have the variety of equipment that we need to do surgery and anesthesia as safely as possible,” said Campbell.

He and his colleague Doctor Rich Kuntz said the Haitian hospital had enough supplies to make due. Meanwhile, Kuntz says he called American for three consecutive days, and each time, he says, a representative told him his bags were lost and there was nothing they could do.

“And I was like, ‘You’re not going to lie to me and tell me you’re looking for it or anything like that?’,” said Kuntz.

American advised Kuntz fill out a “lost baggage” form. A week and a half passed with no update.

Then, the Troubleshooters reached out to American. A spokesman for the company said he’d track down the baggage numbers, and shortly after, Kuntz’s phone rang.

It was American Airlines. They found his bags.

The spokesman told the Troubleshooters they will reimburse the baggage fees plus incidentals, adding—

“Our team continues to investigate why these bags did not make their original connection in Miami, and we apologize for the inconvenience. It is uncommon for American Airlines to mishandle a bag; on average, we transport more than 18 million bags via Miami International Airport each year, and 50% of those are connecting bags. American will reimburse these passengers for their baggage fees, along with reasonable incidental expenses that were incurred. All the bags have – or are in the process of – being returned to their owners back in the United States.” –Ross Feinstein, American Airlines

According to the most recent reports from the US Department of Transportation, American Airlines has the highest ratio of mishandled baggage. To that, the company says American is focused on improving those numbers, as the ratio continues to drop.

As for Kuntz and his colleagues, they will get their supplies and clothes back this Christmas, along with unopened presents for kids 1,500 miles away.