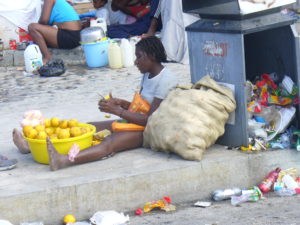 PORT-AU-PRINCE — It will be difficult to convince Haitians to spend extra money and rebuild their quake-ravaged country with structures able to withstand another powerful earthquake, experts said Friday.

Some 170,000 people were killed in the devastating January 12 quake that toppled weak buildings across the Haitian capital.

Two fault lines run under the island of Hispaniola, which Haiti shares with the Dominican Republic, but Haitians have long forgotten about the danger of earthquakes.

“Between six and eight generations of people have gone by who lived with no awareness of earthquakes,” Haitian engineer Hans Zennid told AFP.

The previous earthquakes known to have struck the island nation took place in 1742, 1772 and 1842, said Zennid. The 1842 quake was so devastating it forced the government to move the capital from Cap Haitien to its current location.

Despite the devastation, President Rene Preval has said that Port-au-Prince will continue being Haiti’s capital.

The presidential palace, built in the 1920s, the Congress building, and virtually every ministry building collapsed when the magnitude 7.0 earthquake struck.

However an 11-floor building belonging to the telephone company towers over the rubble, largely intact.

Zennid was the engineer responsible for making sure that building was earthquake-ready.

“From the start I planned to make the building strong enough to resist a magnitude 6.0 earthquake, because the possibilities of a 7 (magnitude) like the one that just happened is something that happens every 150 years,” said Zennid, as he surveyed the building.

A report by US structural engineers giving people the green light to use the building is posted at the entrance, perhaps to ease the fears of workers desperately seeking a semblance of normality. The report said that only one of the pillars suffered minimum damage.

Zennid said he increased the building’s strength after a soil analysis.

“When we began to lay the building foundation and I analyzed the soil quality, I added 20 percent to the security level, which allowed it to resist a 7.3,” he said.

That meant adding 15 percent more reinforced concrete and steel to the foundation, which meant increasing the cost by some 150,000 dollars.

At first his employers “were upset, but in the end they accepted the price increase,” he said.

Haiti’s elegant presidential palace can be rebuilt on the same site, even keeping the same style, Zennid said, but engineers will have to completely re-work the building’s foundation.

That also applies to the vast majority of homes in Port-au-Prince, including the most luxurious mansions and hotels, many of which collapsed when the quake struck, he said.

As in most underdeveloped countries, even rich Haitians tend to expand their homes in stages instead of building them according to a single, structurally sound blueprint.

In order to do that builders need a large pot of money, and “there is no tradition of home loans here,” said French architect Christian Dutour, who has carried out several projects in Haiti.

It will be difficult to explain the importance of proper building codes to a population that overwhelmingly lives below the poverty line.

In the noisy, chaotic streets of Port-au-Prince, street vendors are already selling metal rods salvaged from the earthquake rubble.

According to the US Geological Survey (USGS), which tracks earthquakes around the world, Haiti’s quake could represent the beginning of a new cycle of earthquakes after nearly 170 years of geological peace.

The quake’s epicenter was just 25 kilometers (15 miles) from Haiti and struck at a very shallow depth of 13 kilometers (eight miles).

The USGS estimated recently that there was a 25 percent probability that one or several magnitude 6 aftershocks could strike in the coming weeks, although they will space out more and more over time.

The January 12 quake freed much of the tension accumulated on one portion of the Enriquillo-Plantain Garden fault, which runs along the southern portion of Hispaniola — but another segment east of the epicenter and adjacent to Haiti’s capital Port-au-Prince has barely moved, according to the USGS.

“We are sitting on a powder keg,” geologist Claude Prepetit, an engineer from the Haitian Mines and Energy bureau, told AFP.

“We are faced with the threat of future earthquakes and have to decentralize, and depopulate Port-au-Prince,” he said.