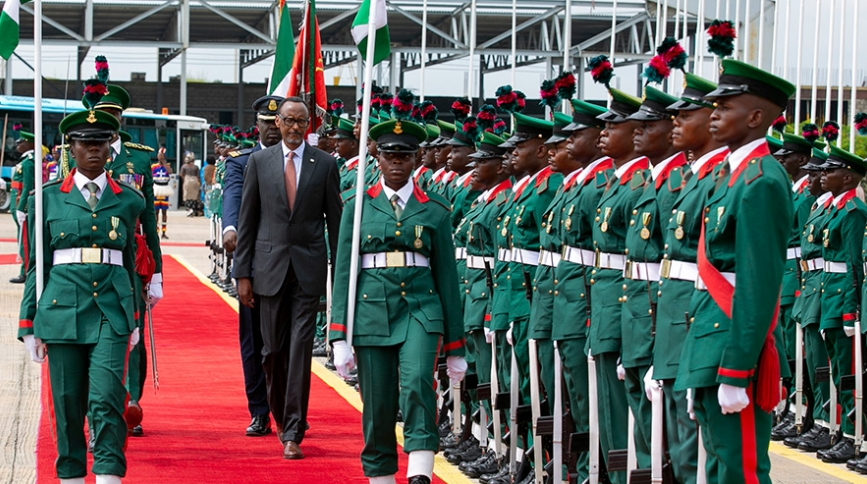 Tolerating corruption is a choice not inevitable and it is within people’s power to end it, which is the most important starting point, President Paul Kagame said on Tuesday.

Kagame who was addressing the National Democracy Day Anti-Corruption Summit in Abuja, Nigeria, spoke alongside his Nigerian counterpart Muhammadu Buhari. Kagame highlighted that the primary responsibility to tackle corruption lies with leaders at every level.

“Where corruption has become the norm, a way of life, it is because leaders have made it that way,” he said.

He added that leaders should not continue focusing on petty corruption while turning a blind eye to the more consequential forms that people only whisper about.

Studies including the famous Corruption Perceptions Index (CPI) by Transparency International continue to show the urgent need to address corruption on the continent.

The CPI 2018 report released early this year indicates that only eight of 49 countries in Sub-Saharan Africa score more than 43 out of 100 on the index.

Despite the prevalence of corruption on the continent, Kagame insisted that leaders must discard the myth that corruption is endemic to particular cultures.

“Corruption is a universal weakness, not an African one, and it is not part of our destiny as a continent,” he said.

“Research has shown that some of the biggest sources and beneficiaries of corruption are outside of Africa, and this has always been the case.”

This, he said, occurs in the absence of a politics that values individual integrity, even when there are well-established institutions.

Kagame noted that corruption does not take decades to be eradicated. Huge gains, he said, can be made relatively quickly, once decisions to break the habit are taken.

“That brings me to responsibility. This principle is inherent to our respective cultures in Africa. We are in charge of our own future. The purpose of transparency is not to impress others, but rather to make our own societies better, because that is what our people expect,” he said.

To tackle corruption, Kagame also suggested the best way was a top-down approach which he said is the fairest and the most effective approach as it empowers the public to join the fight and hold leaders accountable, through elections and other means

“In that way, corruption can definitely be reduced to the minimum possible and that makes a tremendous difference. However, it also takes careful organisation and messaging to make this practice widespread,” he noted.

Culture, responsibility, accountability, and effectiveness are other principles the Head of State highlighted through which corruption can be overcome.

Unlike many African countries that are lagging behind when it comes to fighting corruption, Transparency International has ranked Rwanda the third least corrupt country in the continent two years in a row.

Just like eliminating discrimination, entrenching good governance and ensuring all citizens benefit equally from nation-building, the Head of State mentioned that fighting corruption was one of the many ideals that Rwanda chose in its struggle towards liberation.

He cited institutions like Rwanda Revenue Authority, the Office of the Auditor General and the Ombudsman that helped Rwanda to drive those ideals, but also the home-grown solutions such as performance contracts.

“We must make sure that these institutions and mechanisms actually work. They are created to give us results,” he said. 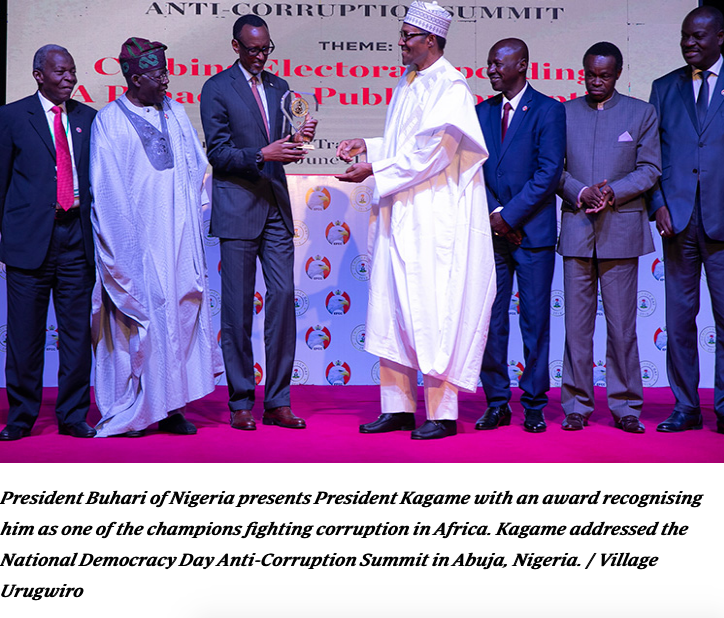 Rwanda has taken a zero-tolerance stance on corruption.

Fighting political corruption is just as urgent as fighting economic corruption, he said.

Kagame pointed to examples of officials who when held accountable for corruption fled the country and have been claiming to be opposition leaders.

“We quickly found out that fighting corruption has a political cost. Officials who did not live up to the agreed standards were dismissed or brought to justice. Others fled into exile and pretended to be so-called “opposition”,” Kagame said.

“Some thought we could not afford to take this zero-tolerance approach given the fragility of our environment. The truth however, is that we couldn’t afford not to do it,” he concluded.

As part of his two day visit, President Kagame is also expected to attend the swearing in of President Buhari today for his second term following his re-election in February this year.