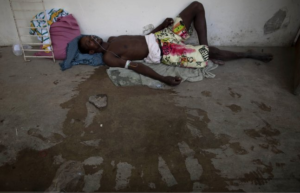 Aid workers struggled to contain the disease as the death toll reached 208, while experts said the epidemic `has not reached its peak.’
BY JACQUELINE CHARLES AND TRENTON DANIEL
jcharles@MiamiHerald.com

MIREBALAIS, Haiti — International aid and Haitian officials said at least five cases of cholera have been confirmed in Haiti’s capital Saturday but insisted that the epidemic still had not spread to Port-au-Prince.

“These were people who contracted it outside of Port-au-Prince,” Imogen Wall, a spokeswoman for the United Nations Office for the Coordination of Humanitarian Affairs. “But we still think this epidemic has not reached its peak.”

Humanitarian aid workers continued to struggle to contain the cholera outbreak that so far has killed 208 Haitians and hospitalized 2,674 as the government mounted a nationwide prevention campaign Saturday on television and radio.

The messages urged Haitians to wash their hands with soap and drink a homemade remedy of sugar, salt and water at the first sign of diarrhea.

But after a devastating Jan. 12 earthquake that claimed 300,000 lives and left at least 1.5 million homeless, many displaced Haitians can’t even afford the prescribed soap and sugar, and there are still fears over drinking the water.

“People don’t have the money to buy these things — they don’t even have the money to eat,” said Vilason Francois, 34, a painter who had just finished taking a bath with boiled water and lives in a tent city in a Petionville plaza. 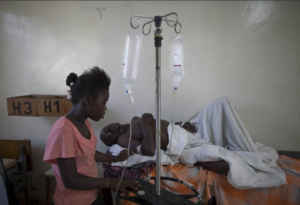 Plans to distribute clean water, soap, and hand sanitizer in makeshift camps set up after the camp also were elusive. Aid workers spent the day in back-to-back emergency meetings deciding on the best strategy to contain the outbreak in rural Haiti.

Others returned to the Artibonite Valley, where the first cases were reported on Tuesday, to continue distributing clean water and install water purification systems.

President René Préval spent the day in Mirebalais in the lower Artibonite region meetings with local government officials to assess their needs. Later, refusing to wear a mask, he visited a clinic that had treated more than 300 patients suffering from acute severe diarrhea, dehydration and vomiting — all telltale signs of cholera.

As he received an update from a group of Cuban doctors treating patients, outside in the courtyard, desperate men carried adult women in their arms, children stood with face masks.

The president — criticized for not being more public after the earthquake — said he came to see what measures needed to be taken “to solve the problem.” He said his attitude with this latest crisis was the same as with the Jan. 12 quake.

“We have to organize a response,” he told The Miami Herald. “What interests me are the results — how many lives I can save.”

Some have been recommending that Haiti temporarily suspend political rallies as the country prepares for presidential and legislative elections Nov. 28. But Préval said his mind was not on the vote, but rather ensuring that his government is equipped to combat the outbreak.

`IT WILL GET WORSE’

Foreign health experts have warned it will get worse, and fear has began to set as epidemiologists from the Centers for Disease Control and Prevention in Atlanta continue to investigate the source of the cholera.

“People are panicking because they don’t know what’s causing this,” said Ronald Paul, 37, a social worker and resident in Mirebalais. “They are afraid to drink the water, and there isn’t enough of it.”

Even in the capital, the displaced wondered about the water. In Sou Pic, a vast settlement on the northern edge of Port-au-Prince on a former airstrip that houses between 45,000 and 50,000 people, residents wanted to know how long they could go without drinking water that they would ordinarily consume.

Water has emerged as a symbol of both fear and survival as confusion seeped in over what was drinkable water versus contaminated water.

Some in the Sou Pic camp said they had stopped drinking water altogether since they heard radio reports Saturday about the danger of drinking nonpotable water, and bathing in rivers.

“I know they say don’t drink the water but we can’t afford not to,” Adievi Miralus, 53. “If we can survive the quake, it would be stupid for us to die because of lack of water.”

Camp dwellers gathered around Kesnel Georges, a 30-year-old water vendor, and wanted to know if they could safely drink from the pouches.

“If you boil the water, is it good?” asked Gina Georges, 50, no relation to Kesnel.

Most people were fearful. “It’s killing people — of course, I’m scared,” said Boudou Lunis, 25. “We’re in the mouth of death.” 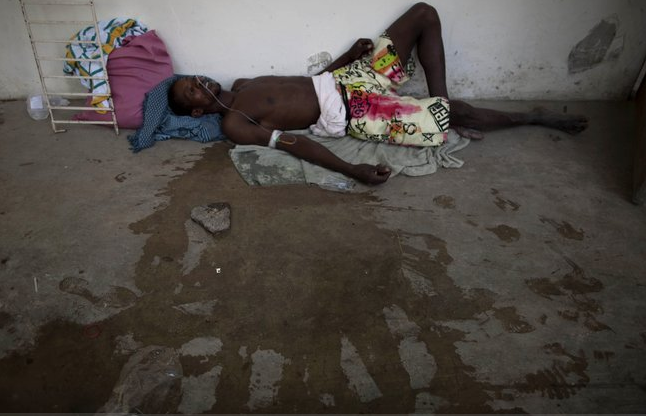