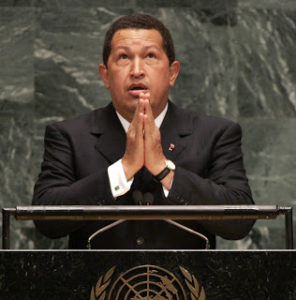 HAVANA (AP) — Venezuela’s vice president arrived in Havana on Saturday in a sudden and unexpected trip to visit President Hugo Chavez as he recovers from cancer surgery.

Communist Party newspaper Granma published online a photo of a smiling Vice President Nicolas Maduro being greeted at the airport in the Cuban capital by the island’s foreign minister, Bruno Rodriguez.

“From there, (Maduro) went directly to the hospital where President Hugo Chavez Frias is receiving treatment to greet his family members and Venezuelan Science and Technology Minister Jorge Arreaza Monserrat, and to discuss with doctors the adequate moment to visit the President the same day,” the paper said.

The previous night in Caracas, Venezuela, Maduro did not specify how long he would be away but said Energy Minister Hector Navarro would be in charge of government affairs in the meantime. Maduro’s announcement came at the end of a long speech at the inauguration of a state governor, and he offered no information on the purpose of his visit beyond seeing Chavez.

In a speech Saturday, Venezuela’s National Assembly President Diosdado Cabello said only that Maduro went to Cuba to visit with Chavez and urge him “to follow his treatment.” Venezuelan press officials in Caracas said they had no additional information Saturday.

The Venezuelan leader has not been seen or heard from since undergoing his fourth cancer-related surgery Dec. 11, and government officials have said he might not return in time for his scheduled Jan. 10 inauguration for a new six-year term. There have been no updates on Chavez’s condition since Maduro announced Monday night that he had received a phone call from the president who was up and walking.

Venezuela’s opposition criticized Maduro for what they said was a lack of transparency surrounding Chavez’s health.

“What I still don’t understand is who is president,” Lawmaker Alfonso Marquina said. “Who is governing the country now? As for the purpose of this sudden and improvised trip, only the national government knows.”

Maduro is the highest ranking Venezuelan official to visit Chavez since the surgery. Bolivian President Evo Morales traveled to Cuba last weekend in a quick trip that only added to the uncertainty surrounding Chavez’s condition. Morales has not commented publicly on his visit or even confirmed that he saw Chavez while he was there.

Before leaving for Cuba, Chavez acknowledged the precariousness of his situation and designated Maduro as his successor, telling supporters they should vote for the vice president if a new presidential election was necessary. Although Chavez has delegated some administrative powers to Maduro, he did not leave the vice president officially in charge of the presidency.

Venezuela’s Democratic Unity bloc of opposition parties suggested Saturday it was time for the government to declare the president temporarily absent from power.

“They are trying to hide what every day is a fact: The government does not want to recognize that there is a temporary absence of the president from his duties,” the bloc said in a statement.

On Friday morning, Maduro read a New Year message from Chavez to Venezuelan troops, though it was unclear when the president composed it.

“I have had to battle again for my health,” Chavez said in the message. He expressed “complete faith in the commitment and loyalty that the revolutionary armed forces are showing me in this very complicated and difficult moment.”

A group of opposition candidates demanded Friday that Maduro provide an official medical report on Chavez’s health. Lawmaker Dinorah Figuera said the country needs “a medical report from those who are responsible for the diagnosis, evaluation and treatment of the president.”

A legal fight is brewing over what should happen if Chavez, who was re-elected in October, cannot return in time for the inauguration before the National Assembly.

National Assembly Diosdado Cabello insisted Monday that Venezuela’s constitution allows the president to take the oath before the Supreme Court at any time if he cannot do it before the legislature on Jan. 10.

Opposition leaders argue the constitution requires that new elections be held within 30 days if Chavez cannot take office Jan. 10. They have criticized the confusion over the inauguration as the latest example of the Chavez government’s disdain for democratic rule of law and have demanded clarity on whether the president is fit to govern.

1 thought on “CHAVEZ NEAR DEATH:Venezuela VP in Cuba to visit ailing Chavez”