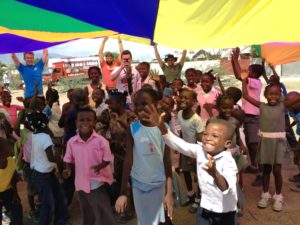 March 29, 2014|By Stephanie Citron, For The Baltimore Sun

Along with a dozen or so published pieces, Bell is widely acclaimed for his Haitian Revolutionary trilogy: “All Souls’ Rising,” “Master of the Crossroads,” and “The Stone that the Builder Refused.” In the course of researching Haiti for his books, Bell has lived among local residents and international relief workers, circumnavigating coups, civil unrest and heartbreaking hardship.

Born in rural Tennessee, Bell has lived in some dynamic settings: New York and London, and he spent a considerable amount of time in Paris before settling in Baltimore. So it was curious to us that, when asked about his favorite travel

The poorest country in the Caribbean, Haiti receives most American visitors nowadays as part of relief missions. The cruise ships listing it on their port destinations

dock at Labadie, a secluded peninsula near Cap-Haitien that does not allow access to local residents.

Bell readily concedes that “Cap” is not for every type of traveler; its appeal is cultural authenticity, unspoiled beaches and important historical sites, namely the largest fortress in the Western Hemisphere. Despite U.S. State Department traveler’s warnings for Haiti, we asked Bell to describe his recommended lures for adventurous travelers

When did you first visit Cap-Haitien, the setting of your trilogy about the Haitian revolution during the colonial period?

I had worked on the project from the early 1980s, but it wasn’t until about 1991 that my wife and I got grants to go to Haiti to do field work. At that very moment was the first coup d’etat against Jean-Bertrand Aristide. He went into exile, and the flights to Haiti stopped for a while, so I didn’t go. I didn’t know any way to get in — now I would know how to if I wanted to. I just wrote the first book sitting at home. Then [in 1994 the U.N. Security

Council] finally worked out his return, and I came in on their heels, in 1995.

How did you get there?

I flew on an American Airlines flight to Port au Prince. The first couple of times I went to Cap [Haitien], I drove, partly because I wanted to cover different parts of the country. The distance is about 100 miles from Port au Prince to Cap-Haitien, but it can take all day, eight hours-plus, because the roads are so bad. A lot of flat tires. After a while, the ride got too taxing. I discovered that a plane went there directly from Fort Lauderdale.

Why did you focus on Cap-Haitien?

My hero is a man of the north, and during the colonial period, Cap-Haitien was the cultural capital. Port au Prince has always been the seat of government. Cap-Haitien was bigger, sort of like the relationship between New York and D.C.

The expanse of the colonial town is limited because of the mountains and water. And most of it was still pretty much intact when I first started going there in 1995. The downtown is filled with beautiful French colonial architecture. And it overlooks the water.

There are reports that tourism is returning to Haiti. There is a cruise ship destination not far from Cap-Haitien, but what do you recommend for Americans who want to come for longer than just getting off a cruise ship for a day?

You can go to the citadel; you can go to the beaches. There are some very nice beaches on the little peninsula outside of the town. Labadie: They would open it to Haitians when the ships were not in port, but when the ships were in, they would lock it all up so that [locals] couldn’t get in. Haitians like to go there because you can bring in your own food. I don’t think there is a restaurant. Nearby there’s a very nice [hotel] called Cormier Plage that’s run by French people, I think. They have a great restaurant. That’s where the [United Nations] higher-ups stay. They have snorkel and scuba.

People on the cruise ships don’t get beyond the beach where they dock?

No. I talked with some people years ago about an initiative to open up Labadie beach [the private resort on a secluded peninsula where the cruise liner Royal Caribbean docks] so that people could come across to the town and go to the citadel, which is the eighth wonder of the world. It’s a mountaintop fortress that looks like Noah’s Ark once you get up there. It’s been very nicely restored by the Haitian historical preservation society. The cruise ships used to come into town, there is a cruise ship dock. There’s been an effort to start that up again, but I do not know if it has. I tend to think not, because there’s continued instability.

African-European with a little Indian influence. A little more French than you might find elsewhere. They eat a lot of pork. Griot [fried pork with sour orange juice and peppers] is the famous pork dish. Rice and beans is a staple, plantains are a staple. Food is very highly seasoned; they grow scotch bonnet peppers, and use them in sauces. They eat a lot of goat; their goat is great. And they are the only culture in the world that [prepares] this version of conch: They call it lambi (a peppery dish with lime and sour oranges), and it’s considered to be a delicacy.

I read that while visiting Haiti, you became proficient in an aspect of Haitian vodou that inspired your writing, as well as a complete immersion into the culture. How were you able to learn about it — isn’t it a rather closed ceremony?

When I first went to Haiti, I was already interested in vodou because of its importance in the Haitian Revolution. I wanted to have some firsthand experience of it, and meanwhile I was pretty ignorant and didn’t really know anybody. There’s all kind of ways to be introduced to it and have different experiences with it. In Cap Haitien there was a ceremony going near the Hotel Mont Joli where we were staying. I could hear the drumming and chanting, and there was a total blackout in the town, so I realized I might have a chance to sneak in without anybody seeing that I was a foreigner. I happened to meet a Haitian in the hotel (who later became a good friend) who saw what I was going to do, so he said, “You’re better off if I come with you.” I walked in his shadow, and in the darkness nobody seemed to notice me at all.

Many are small and quite private. The public ones are big circles with many rings [of people] wrapped, around drumming and chanting, which induces trance and moves some people toward possession by the spirits they serve. In the outer rings there’s food and drink and socializing, not too different from a fish fry at a U.S. church. The more you move toward the inner ring, the closer you approach to the spiritual core of the ceremony, and the later into the night it gets, the more casual people drop out.

What did you get from the experience?

Like most of the world’s great religions, it has a charismatic aspect. Most people practice a form called Ginen, which suppresses your ego and allows spiritual powers to guide

what you do, in the direction of having stronger, better relationships with the community you are in. Magical thinking is part of the social contract in Haiti, and the religion underwrites and supports it.

What is magical thinking?

Well it’s like if you take a test for cancer and say a prayer that it comes back negative and it does. You believe your prayer worked. That’s magical thinking. A lot of people in the U.S. believe in the efficacy of prayer. In Haiti, you see the same thing in a different context. I have been happy to sign on. My experience of Haiti is that there is less ego separation there than you find in First World communities, where individual drive

Does the general visitor have a chance to experience it?

There’s all kinds of ways to have the experience. There are sometimes ceremonies which cater to tourists, which I don’t particularly recommend. In the worst case ,your interest may instigate a ceremony that wouldn’t have happened without you; that can cause trouble and also be very expensive. The best way to begin is at large public ceremonies, like those at Souvenance (near Gonaives), Plaine-du-Nord (near Cap Haitien), and Saut d’Eau (in the interior); these are seasonal, so it helps

to know when they are. A good many foreigners attend, so it’s not so difficult to enter the outer circles. An experienced companion is good to have, someone who can stop you from crossing the invisible boundaries. If your intentions are honorable, you are almost certain to have a happy experience in these situations.

A dark side of vodou, the stuff you see in the horror movies, does exist (usually practiced in private consultation), sort of like Satanism exists as a shadow of Christianity. You can pay to acquire things you desire, like money

, power, the love of people who wouldn’t love you on their own. It’s not a good thing and can have extremely serious repercussions. I suggest steering clear of anyone who offers to sell you magical services of this kind.

Who goes to Haiti on vacation?

There was a period in the mid-’90s that I saw people walking around with Lonely Planet Guides; like the alternative tourists. There were a few of those people and [by now] there could be more. I would encourage people to go; they will have one of the most powerful

experiences if they do.

the regional airport into an international hub. No nonstop carrier flies from BWI-Marshall Airport into Cap-Haitien. Take tiny IBC Airways from Fort Lauderdale or West Palm Beach on varying days each week. From $306. Go to flyibcair.com.

include epicurean breakfast and dinner. From $110. cormierhaiti.com
id=”mod-a-body-after-first-para”>Auberge du Picolet. Cap’s newest accommodations are also the most scenic, featuring oceanfront rooms, a French cafe and an easy

walk to town. From $130. facebook.com/AubergeduPicolet

La Citadelle la Ferriere. The largest fortress in the Western Hemisphere, atop the 3,000-foot Bonnet a L’Eveque mountain, accessible by strenuous hike or horseback (horses for hire

of Haiti’s only king, Henri Christophe. Now in ruins, it was once considered the Versailles of the Americas. worldheritagesite.org.

Bwa Kayiman. The site of the vodou ceremony where the first slave insurrection of the Haitian Revolution was planned. Open-to-the-public ceremonies are still held there many evenings. In the woods, 5 miles south of town.

I have been involved with Haiti for something over 20 years and I have never heard of this guy.
Perhaps publication of this article will make some locals aware of his existence.